Ever been to a karaoke night and heard a voice rise up that actually sounded… really good? Christine Fink has one of those voices. She’d relegated her talents to karaoke nights in crowded Alabama bars – that is, until her sister Orenda, well-known for her work with Saddle Creek mainstay Azure Ray, dragged her into a bigger spotlight.

Christine moved to Omaha to form High Up with her sister, brother-in-law Todd Fink (also of The Faint), Josh Soto, and Matt Focht. This month, they released a self-titled four-song EP that blends classic Southern rock and soul, with a little punk vibe thrown in for good measure. Thematically, its songs capture longing and love in the tradition of Otis Redding and Aretha Franklin, but also critique the Capitalist machine with sassy bangers like “Two Weeks” and “Your System Failed You.”

Whether belting out a protest anthem or crooning an ode to a crush, High Up is a band that feels good to listen to, like slipping on a favorite jacket you haven’t worn in a while. Their debut album You Are Here, slated for release next month via Team Love, continues along the same lines, mixing up bluesy, heartfelt ballads and raucous shout-along refrains, like on album opener “Alabama to the Basement,” which we’re premiering below.

The song is a celebration of letting go and rocking out, with clear autobiograpical vibes regarding the band’s origin story. As a kid in middle school, there were certain songs I would set my radio to wake me up to; this song has that same rush, that energy you need to fight through another day, or push through a shitty situation on your way to something better. It’s the perfect introduction to an album that that tonally runs the gambit from high energy cheer to soulful sorrow.

We sat down with Christine to talk about loving your parents music, what it’s like writing with her sister, and when we can see High Up out on the road.

AF: You’re originally from Birmingham, Alabama correct? What did you grow up listening to as a kid?

CF: Yes, born in Birmingham, but spent varying years of my life in other towns – Ashville, Oneonta, and Muscle Shoals. My parents exposed me early on to stuff like Pink Floyd, Screamin’ Jay Hawkins, Hank Williams, Graham Parsons and the like. I was really into oldies as a kid – Frankie Valli, Beach Boys, etc. My first real exposure to soul I think was when I saw Smokey Robinson on Sesame Street in the late ’80s. I was never really the same after that. As I grew older, I developed a taste for punk and indie as well, and all those styles kinda melded to form my tastes as an adult.

AF: I always find it funny when people initially reject their parents music, only to come back to it later on with more perspective. Music can be so interesting when styles collide.

CF: Absolutely. I don’t remember really ever having disdain for what my parents listened to. They have great taste! Of course, they might remember differently!

AF: The story goes that your sister and band member, Orenda Fink, saw you perform karaoke in Muscle Shoals, Alabama. She was blown away and immediately thought you should start a band together. Was this a scary proposition?

CF: I jumped at the idea. It was really a big reason for me moving to Omaha to begin with – giving up the corporate grind and pursuing more creative endeavors. I’ve always had such great reverence for Orenda and her work, and wanted a chance to work with her creatively. The scariest part is probably the financial instability of playing music more or less full time. And rejection of course. But those fears come with the territory and the rewards outweigh the risks in my eyes.

AF: What were your go-to Karaoke songs?

CF: I love trying out all genres, so I pepper in a little bit of everything. My go-tos are usually midnight train to Georgia – Gladys knight and the pips, whole lotta love- Led Zeppelin, sometimes I’ll throw in some Radiohead or Dolly Parton for kicks.

AF: Can you tell us a bit about the songwriting process for High Up? Is there a lot of back and forth between you and Orenda? Or does she take lead when it comes to composition?

CF: Orenda does the bulk of the songwriting, but I co-write and we have a few other co-writers. The whole band collaborates on the tunes to varying degrees. It’s very open and collaborative.

AF: I love the video for “Two Weeks.” It really nails the playfulness and soul of the band. What was the production process like?

CF: Thanks! We recorded the video over the course of two days I believe? Harrison Martin directed and filmed and we had so many friends help. It was a blast and very low stress. It’s important to have a good time and we wanted to reflect the good vibes of the group who gathered to help us. It was a relatively quick and easy process because of the professionalism and talent of everyone involved. The scariest part was probably me having to stand on the table without busting my ass!

AF: “Blue Moon” really hit me in the gut. Can you give me a little background on its genesis?

CF: It hits me too to be honest. I’ve struggled with mental illness most of my life, and the song is really a way to express an almost constant sinking feeling, of feeling like I’ve exasperated those I care most about. There’s a little glimmer of hope in there: “I can’t take it much longer… Or so I say.” Because I can, I hope we all can, and can learn compassion, patience and love for those in our lives who are struggling.

AF: It’s wonderful that you felt comfortable sharing that kind of emotion. I myself struggle with anxiety and depression. It can be comforting to hear someone else’s journey. Were the lyrics difficult for you to share with the band? Or was it more of an unburdening?

CF: I feel like not sharing that emotion would be disingenuous. It’s who I am and I’ve gotten such comfort from other musicians who have been brave enough to open themselves up. Orenda and Morgan Nagler of Whispertown actually wrote that song for me, culled from many tearful admissions on my part. They took what I was experiencing and their reactions to it and wrote the song. It was heartbreaking to read for the first time, but also very cathartic. I’m so very grateful for their talent and ability to fine tune my messy emotions.

AF: Many of the songs on the album take their subject matter loosely from the Bible, such as “Glorious Giving In.” How does spirituality (or your reaction to it) play into High Up’s themes and material?

CF: I can’t speak for other members of the band, but I don’t have any kind of religious belief system. I love religious iconography and many of the allegories associated with religion, but I don’t subscribe to the actual belief system. We use spirituality and references of such because they do speak to the human condition a lot, and I appreciate that. I’m more of a nihilist, with a heavy dose of the Golden Rule.

AF: Can we expect to see High Up on tour soon?

CF: Yes!! We have a nationwide tour in the works for the month of March in support of our first full length, You Are Here, which comes out February 23rd on Team Love. 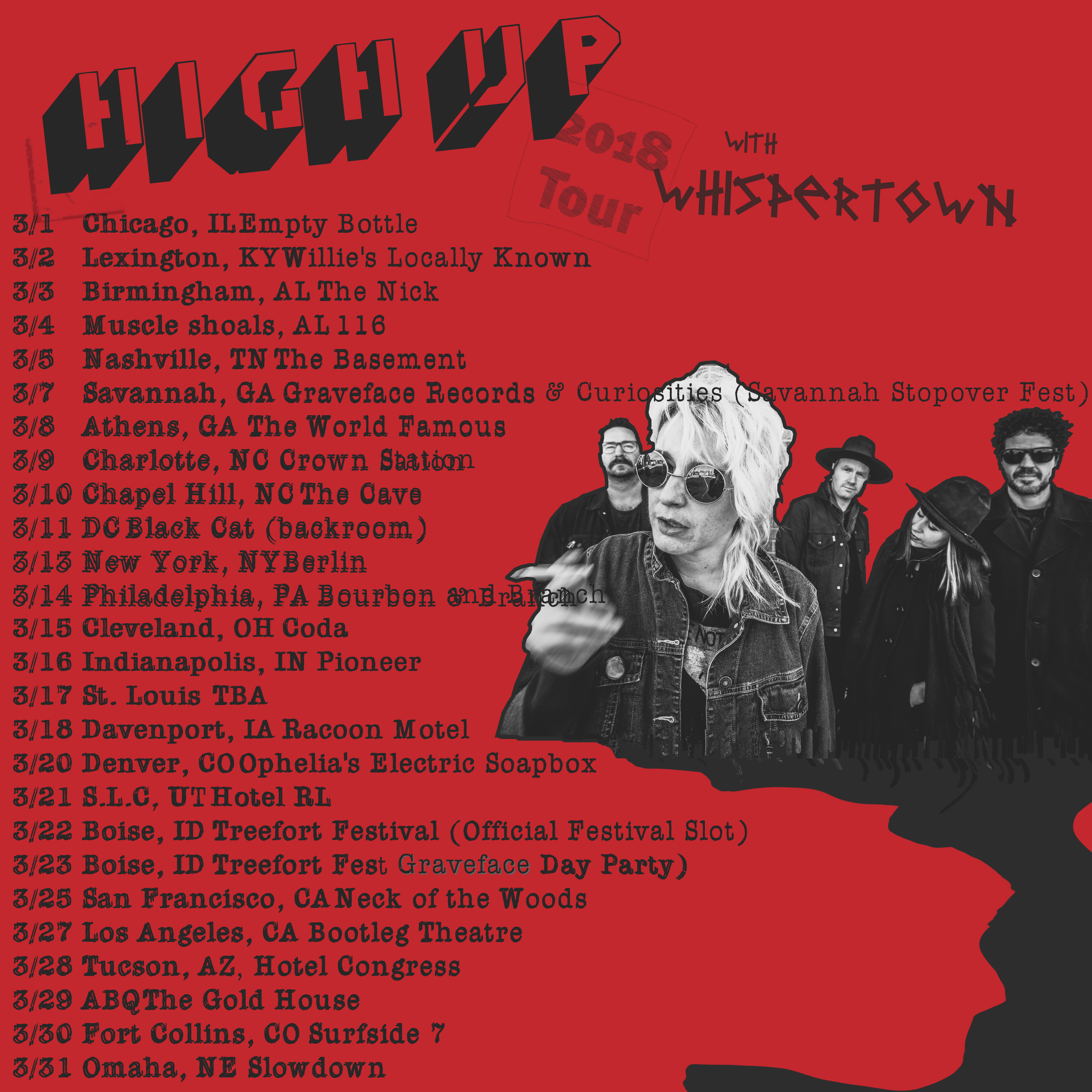 AF: What do you hope the audience takes away from a High Up show?

CF: Lots of merch! Just kidding… My goal is to entertain and connect. I want people to have fun, get mad with me, get sad with me, laugh and cry with me. We’re all pretty fucked up, right? And so many times we feel like we’re the only ones, but we’re not. It’s important to reach out to others and say hey, you’re not alone, we can get through this together. If you can dance and sing along through the anger and tears, so much the better.