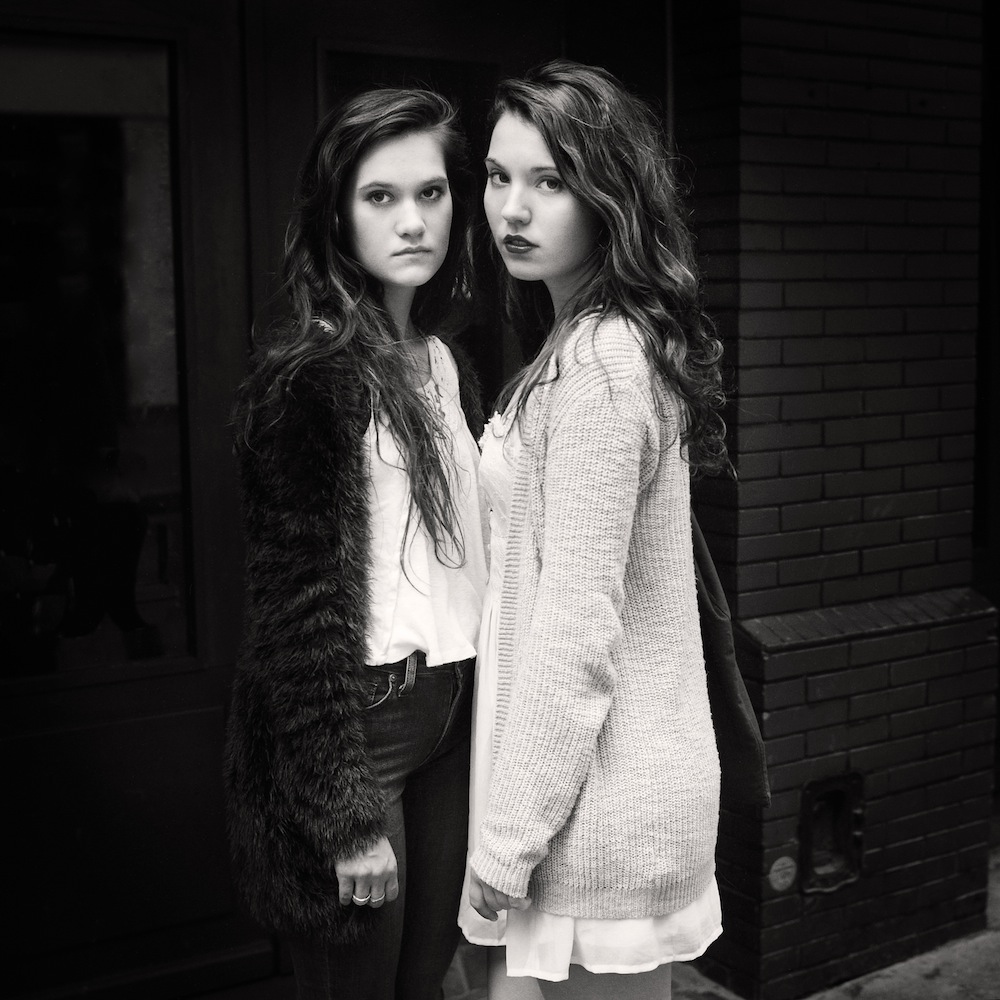 Over the course of the past two years, Lily & Madeleine Jurkiewicz, teenage sisters from Indianapolis, have had a performance go viral on Reddit, written their first original songs, gotten signed to Asthmatic Kitty, released two full-length albums and an EP, and played several tours. The duo’s most recent album, the spooky and elegant Fumes, starts with the basics that have always characterized Lily & Madeleine’s sound–unadorned folk melodies and close harmony between the pair’s twin voices–and twists the basic foundation into something more nuanced and experimental. In what’s perhaps a byproduct of their overnight success coupled with being so young, Lily and Madeleine are still evolving as artists: Fumes pushes at the outer boundaries of folk and indie pop–turf that has by now become familiar to this group–and hints at more experimental, darker territory to be explored in the future. Even “Peppermint Candy,” one of the poppiest tracks on the album, complexifies its catchy melody with a sinister lyrical slant: “Peppermint candy, and a hand upon my gun,” the first verse begins, “I keep it handy, I’ve never been the kind to run.”

The overarching feeling in these tracks, however, is a kind of hopeful independence: the women in the songs are alone but self-sufficient, and just discovering their powers. “We felt inspired to create songs that reflected our current empowerment,” Madeleine explained to me when I called the sisters to chat yesterday afternoon. It was their second tour stop, and they were in Boston, waiting to start soundcheck. Read on to learn about Lily & Madeleine’s writing process, what they’ve been listening to these days, and what’s next for the duo.

AudioFemme: Hi, guys! You just kicked off a tour–how’s it going so far?

Lily: It’s been really fun. We’ve only had one show–we’ve done some radio things–but tonight is our second show in Boston.

Madeleine: We had a show in Indianapolis, right before Halloween. That was our album release show. The first show that we traveled to was in Charleston, WV, and we played on the Mountain Stage, which was really cool because they’ve had, like over 800 shows on that stage and broadcast them on the radio. Now we’re in Boston, and we really love Boston. It’s gonna be fun!

AF: You guys just released Fumes, your second album in 2 years. You’ve been so prolific so far–what’s your writing process like? Do you set a regular schedule or routine for yourself in terms of writing or playing?

Lily: I like to play every day just because it’s relaxing and fun. I like to write too, but you can’t always write a song by pressuring yourself to do it–sometimes it’s better when you’re inspired. So I don’t write every day.

AF: Has your writing process changed since your first recordings?

Madeleine: Honestly, no. The writing [fusion_builder_container hundred_percent=”yes” overflow=”visible”][fusion_builder_row][fusion_builder_column type=”1_1″ background_position=”left top” background_color=”” border_size=”” border_color=”” border_style=”solid” spacing=”yes” background_image=”” background_repeat=”no-repeat” padding=”” margin_top=”0px” margin_bottom=”0px” class=”” id=”” animation_type=”” animation_speed=”0.3″ animation_direction=”left” hide_on_mobile=”no” center_content=”no” min_height=”none”][on Fumes] was pretty similar to what it was for our first album. We wrote the same way, with me, Lily, and Kenny Childers, who’s our co-writer. The way that Fumes is different from the first album is that once we got into the studio and started arranging the songs, we began to experiment more. We brought in some new musicians and tried out different sounds, different distortions, things like that. The writing itself wasn’t different but the production was a little more involved.

AF: What inspired you thematically on this album?

Madeleine: Once we finished the first album and had some success with that, we knew we wanted to make a second album that was going to be just a little different, a little more evolved. Because we’d grown up, I guess. We were inspired by the tours we had been on, the people we had met, the experiences we had had, the way that our careers were shaping us as artists and as women. We felt inspired to create songs that reflect our current empowerment, I suppose. That’s really the main theme of the record. Empowerment.

AF: And these are all new songs that you’ve written since putting out a successful record. On your first EP, did you include any old songs? Anything that you’d written before knowing there was even going to be an EP to put them on?

AF: Wow. So did you start songwriting specifically for the recording process?

Madeleine: Yeah, pretty much. We met our manager and producer and he challenged us to start writing our own music. We just fell in love with the process of creating  together, and we both just love music so much that it totally made sense to write our own material. Before that point we hadn’t really done much with writing.

AF: Did you worry at any point that you wouldn’t be able to write songs?

Lily: Oh, yeah. It was really hard at first. We tried and we didn’t know how to do it. Now it’s great.

AF: Clearly! So what got the ball rolling? Did you enter into the process totally collaboratively?

Madeleine: We did, yeah. That’s kind of how we always do it. Usually one of us will start with an idea and bring it to the other. Once we have a verse or a melody, just something to start on, that makes it easier to develop the song more quickly and turn it into something we both like.

AF: What are the best things about songwriting with a sibling?

Lily: Because we’ve always lived together, we have a lot of the same experiences. At the same time, we have different emotional reactions to things. Under pressure, Madeleine tends to get more anxious, and I tend to get more pushy. It’s a difference in our personalities.

AF: It must be beneficial to you as business partners to have different strengths. How has your personal relationship evolved since you began this project?

Madeleine: Definitely [it is beneficial to have different strengths]. I think we balance each other well. We’ve always been close. We’re not very far apart in age, and so we had the same teachers growing up, and very similar friend groups. This experience has made our relationship stronger, but nothing’s really changed that much, because we’ve always been friends.

AF: Have you always played music together? What were your first musical experiences?

Lily: We would always sing together around the house and things like that. But we never performed together.

Madeleine: Like Lily said earlier, we’ve loved music forever. It was something I would do as a hobby because I liked it and I was good at it. I didn’t think of it as being a career until we started writing and released our songs and signed to a label. Even then, I was really unsure of what we were getting ourselves into. Not until recently have I felt super comfortable with what we’ve been doing, but now I’m ready to be an artist and a musician. I’m letting myself do this and control this. I’m feeling good about it now.

AF: It sounds like you’ve both had to grow up really quickly.

Lily: Kind of. Yeah, probably. What with the places we’ve been, and the challenges we’ve had to overcome. But I do feel that we’d be the same people if this wasn’t happening.

Madeleine: I think about what I’d be doing if I was in college, or whatever, if I wasn’t doing this with Lily. I probably wouldn’t be as strong, and as sure of myself, because we’ve had really cool experiences that my peers haven’t had yet or may never have. So we’re lucky.

AF: Is it hard keeping in touch with friends who are on that other path?

Madeleine: I’ve stressed about that a lot. Like, as recently as last month. More and more, I feel like the people who want to stay in contact with me and support me, they will. Those who don’t, I don’t have any place for them in my life.

AF: Talk to me about blood harmony. I love that phrase. What does it mean, and why is it so special to you?

Madeleine: I love that phrase too. It’s so creepy and cool. Well, I think it’s really natural for us to harmonize because we have the same voice, and the same genes. It’s really just the way we naturally do things.

AF: You have this amazing story of having a song go viral on Reddit and breaking into recording in this very fast, Internet-based sort of way. What do you think about Internet stardom and “going viral” as a way of breaking into the music industry?

Madeleine: It seems like that’s the way it happens now. We live in this age of technology, and posting stuff to YouTube is super common. Things going viral, it happens all the time, and I think it’s actually an awesome platform for artists to get going and put their art out there. Sometimes you have to search through a lot of crap to get to the good stuff, but I think it’s an awesome way for musicians to get started. I think we’re lucky that it happened for us that way.

AF: Really fast, too! If that hadn’t happened, would you be trying to break into the music business in other ways?

Lily: I think so. I think I’d probably go to college and study something music-related. But this is what I truly want to be doing so I’m glad everything went the way it went.

Madeleine: I don’t even want to talk about what I’d be doing if I wasn’t doing do this. Because obviously this is what the universe has given to us right now, this opportunity, this chance, so I think it just makes sense for us to  keep going with it. If I wasn’t, I guess I would be in college, and have friends and a boyfriend and hang out and go to parties. But I’m doing this, and I want to be doing this.

AF: What are some of your individual influences, and what do you both like to listen to?

Lily: My influences, they shift a lot. I tend to get really obsessed with an artist for a couple of weeks and then it dwindles a bit. I still listen to them, but I calm down and move on to something else. Right now I really like hip hop.

AF: Wow, I would not have guessed that from listening to your album!

Madeleine: Lily’s been sending me some of her hip hop stuff. I like it, but it’s not my favorite. I’m into electronic stuff–not hardcore electronic, but I’m starting to get into the genre a little bit more and take some influences. Maybe on our next album you’ll see some hip hop and electronic influence in our songs!

Catch Lily & Madeleine live tonight in New York City at Le fabulous Poisson Rouge! It’s not too late to pick up your tickets here, and stay tuned for my coverage of the show. To get a taste, watch the official music video for “The Wolf Is Free,” below: