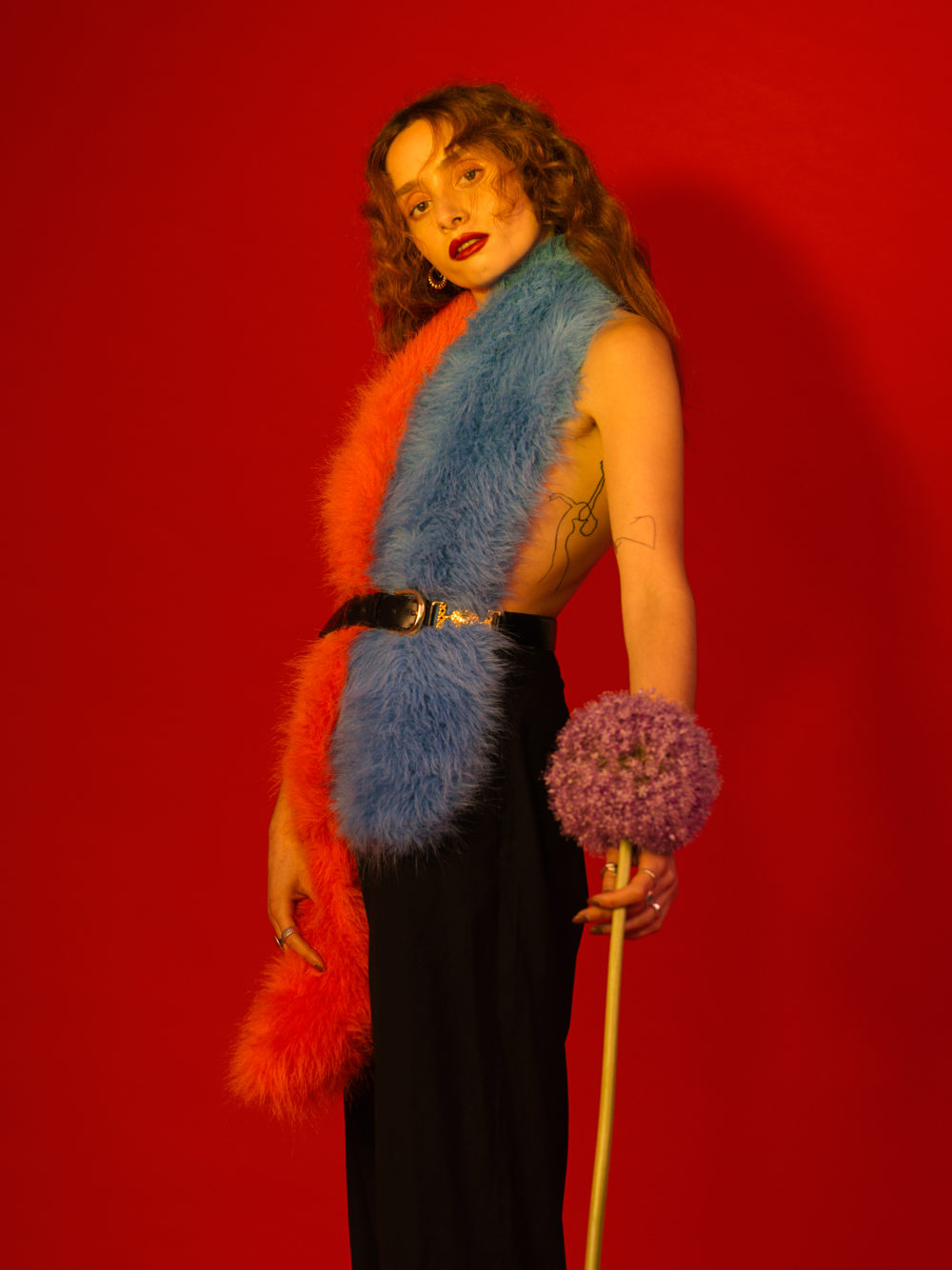 I first met Bel perched up at the bar of Max Fish on the Lower East Side during the last existing Fashion Week before COVID hit. Clad head to toe in vintage designer clothing, she exuded a unique warmth, juxtaposed with a cerebral demeanor – the encounter was refreshing during a season that can too often feel like a cesspool of egos and expensive handbags. We immediately began discussing her interest in psychology, feminism, her work in music, styling and love for refurbished fashions. Bel exists in a world of her own design – grounded, authentic, unfiltered, and of raw nature. Avoidant of the typical rose colored glasses worn by a fresh Aussie in the Big Apple, she’s real. There’s no veil to hide her imperfections or inner truths. Unashamed and unwilling to compromise in her approach, her ambition echoes like a delicate flame on the cusp of unleashing wildfires.

As a feminist activist and multi-disciplinary artist, Bel creates a striking visual world that accompanies her sonic prose. She decided to pursue music professionally at just sixteen years old. “I bought every book you could imagine on ear training, on classical music theory, to production, to how to make samples and all of these things, and I just went haywire for years,” she recalls. “So by the time I released my first ever song when I was, I think 20 or 21, I already had a pretty good grasp. And since then, it’s just been a work in progress… but I can definitely hold my own in a room.”

Raised by parents in the medical field, with a strong sense of morality, she found the hot air and spinelessness of certain industry personas stifling. “Unfortunately, the music industry does attract a certain type of person with a slightly different moral compass. And that’s just an industry that I’ve chosen to go into, willingly,” she says. “When choosing people to work with, I really am very focused on trying to understand who they are as a person as opposed to their job in the industry.”

Bel began her year with the release of “Better Than Me;” the track’s sleek production and syrupy charm made it a song not just to be listened to, but one to be consumed through all the senses. Marrying the avant-pop and experimental realms, Bel’s second single “Spectre” catapulted her to the forefront of Australia’s female pop ranks. Produced by Konstantin Kersting (Tones and I, The Jungle Giants, Mallrat), “Spectre” was a fearless return from an artist always on the cutting edge of sound and visual artistry. Bel worked on the music video with James Mountford, the creative director for BANKS and Chance The Rapper. The resulting art-house meets fashion film exemplifies Bel’s unique visual artistry and intense introspection, making a comment on the demanding and often misleading nature of the fashion and music industries.

Bel connected with Mountford via Instagram while living in Australia (he’s British, and was living in Los Angeles). Given the distance, Bel says, they had “obviously limited opportunity to work together,” but “just stayed in touch all those years connecting, celebrating each other’s achievements, supporting each other through awkward things, and just made a really nice kinship. When it came to the point where I could actually get myself over to LA, we cleared our schedules and we did it. [When] I first met him in the flesh, it was like I already knew him because we had been speaking for so many years virtually.”

“Spectre” addresses the imbalance of power in the music industry that led Bel to co-found a a network for women, trans and non-binary folks with fellow artist Sarah Wolfe, after Jaguar Jonze and hundreds of others came forward to out a well-known Melbourne-based photographer as a serial abuser. Bel bravely details her own experiences with sexual assault in a powerful essay titled “Unmute Us,” noting that over a thousand artists, managers, producers, publishers, label heads, publicists, journalists, A&R, tour managers, and media lawyers joined her collective in the first week of its existence – obviously, the safe space she’s attempting to create is sorely needed in an industry where toxic dynamics and pressure to immediately bond in sessions with male co-writers and producers foster the boundary-less behavior that quickly escalates to something predatory in nature. Too often, it leaves women – particularly those who are just starting out – feeling inferior, as though they have no place in the industry. “In the piece, I wrote specifically about the psychology of shame, and the psychology of guilt when it comes to these things because we somehow turn it in on ourselves and internalize it when that’s just completely unnecessary, and unsolicited,” Bel points out. “Shame is the universal theme when it comes to dealing with these men; as women we often internalize it and turn it in on ourselves.”

With a newfound sense of empowerment, Bel is ready to take on her next project – a three-EP trilogy, the first installment of which arrived at the end of August. T1 compiles singles “Better Than Me” and “Spectre” alongside the recently released “Good News” and opens with a beautiful spoken word intro. A natural poet since age five, explaining her ethos behind the body of work is an important component to Bel’s musical repertoire. “That piece was written in no more than 20 minutes, and I didn’t edit it, I didn’t fix it. I just wrote it. And then that was it. Poetry and spoken words, specifically the delivery of it, is really exciting to me,” she says.

When asked her advice for young women developing the courage to go after their dreams, Bel answers thoughtfully and instinctively. “I still [ask myself] what if I didn’t choose music, and why did I choose this? The thing that I come back to time and time again, is trust your intuition and trust your gut because there’s nothing that’s going to scream louder than that when it comes to keeping you safe and keeping you on the right path,” she says. “Whether it’s dealing with a person, or making a decision for your career or anything like that, if something is screaming out, you have to listen to it.” With so much to say, it’s time we listened to Bel, too.