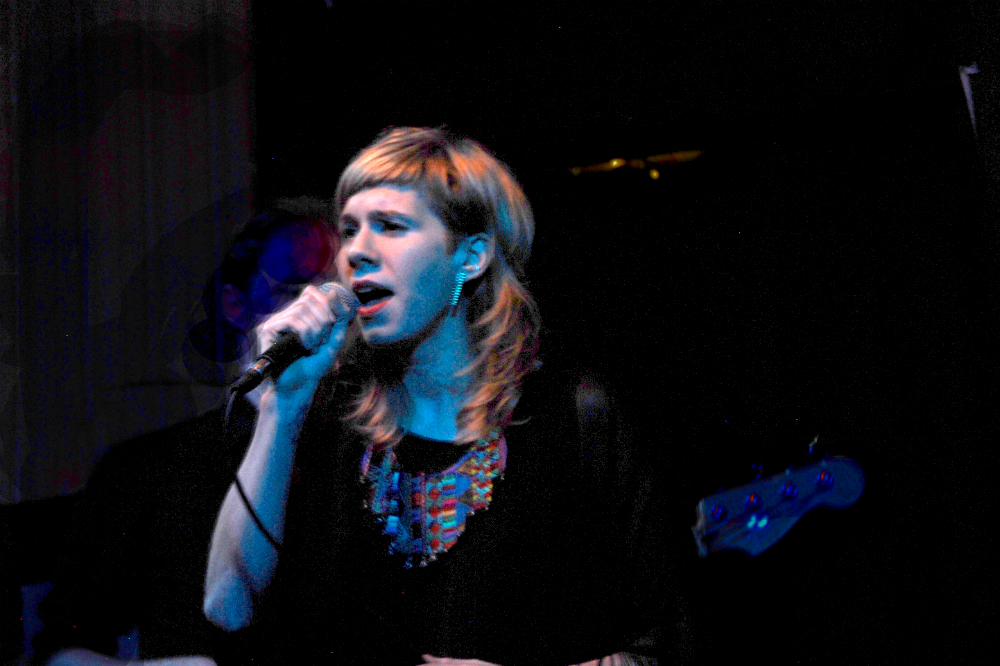 We’ve all had that friend that just can’t get over the past, no matter how seemingly small the trauma, that friend that wants to coddle her pain as though it were something precious rather than something that should be released. And, for better or worse, many of us have been that person who just can’t let go. That’s what makes “The Knot,” the debut single from Brooklyn band Oracle Room, so poignant. Lead singer Alex Nelson is all tough love and real talk, here to provide a good dose of therapy in sonic form – so much easier and less expensive than a trip to the psychiatrist.

Nelson’s voice alone has healing powers; at once lush and articulate, PJ Harvey and Cameron Mesirow of Glasser immediately spring to mind when searching for comparisons, though you get the sense that she’s be influenced by classical and pop vocalists alike. Even more startling are the gorgeous production flourishes; Nelson co-produced the track with Grammy-award winner Derik Lee and the pair made some beautiful choices. “[fusion_builder_container hundred_percent=”yes” overflow=”visible”][fusion_builder_row][fusion_builder_column type=”1_1″ background_position=”left top” background_color=”” border_size=”” border_color=”” border_style=”solid” spacing=”yes” background_image=”” background_repeat=”no-repeat” padding=”” margin_top=”0px” margin_bottom=”0px” class=”” id=”” animation_type=”” animation_speed=”0.3″ animation_direction=”left” hide_on_mobile=”no” center_content=”no” min_height=”none”][He] approached me a couple years ago and expressed wanting a passion project,” says Nelson of the collaboration. “He always had so much work, but he wasn’t working on a lot of music that he loved.” His admiration of Nelson’s songwriting comes through in their work together – when she sings you want to feel hollowed out, the vocal sounds hollow; airy harmonies shift and swirl in a warped, ghostly chorus, the aural equivalent of a knot tightening in the stomach. “We’ve spent the last two years working on properly recording and producing my work in his free time, which was very sparse,” says Nelson, adding that there are five tracks that will be released as singles before appearing physical EP.

Sinister synths burble through “The Knot” courtesy of Joe Phillips, while Zack Fisher’s roomy, organic drumbeats dissolve fizzily into the rest of the composition but keep things marching along at an insistent pace. Moody strings from Pamela Martinez soar here and there, but the focus is always on Nelson’s vocal, as it should be — she’s the emotional catalyst for its lyrical content, an unlikely cheerleader for getting through the tough stuff and moving on to bigger, better, brighter things. “I believe our planet and all of its inhabitants are going through a major transition right now,” Nelson explains. “It’s a really wonderful and powerful change. I usually write songs to encourage people to stay uplifted, to embrace love and express compassion and to really come into their highest being, as this is what will facilitate the transition we are all looking for. A lot of the songs have a darkness or heaviness to them sonically, but usually the lyrical message is quite positive.”

As a band, Oracle Room have recently undergone a similar transformation; formerly known as Andra, they dropped their old moniker because it infringed on a very famous Romanian pop singer. Their show at Glasslands on Tuesday was the first they’d played under the new name, and Oracle Room added Joe Sucato on keys, guitarist Justin Gonzales, and bassist Ian Milliken to the usual duo of Nelson and Fisher. But perhaps the most telling addition to the lineup was a mini-chorus who sang back-up on the first three songs of the set, helping bring to life the harmonic vision that Nelson and Lee played with in the studio. With ideas this big, won’t be long before Oracle Room becomes Brooklyn’s most buzzed about act, and “The Knot” is simply the first in what will hopefully be a long line of breath-taking singles for the breakout band.