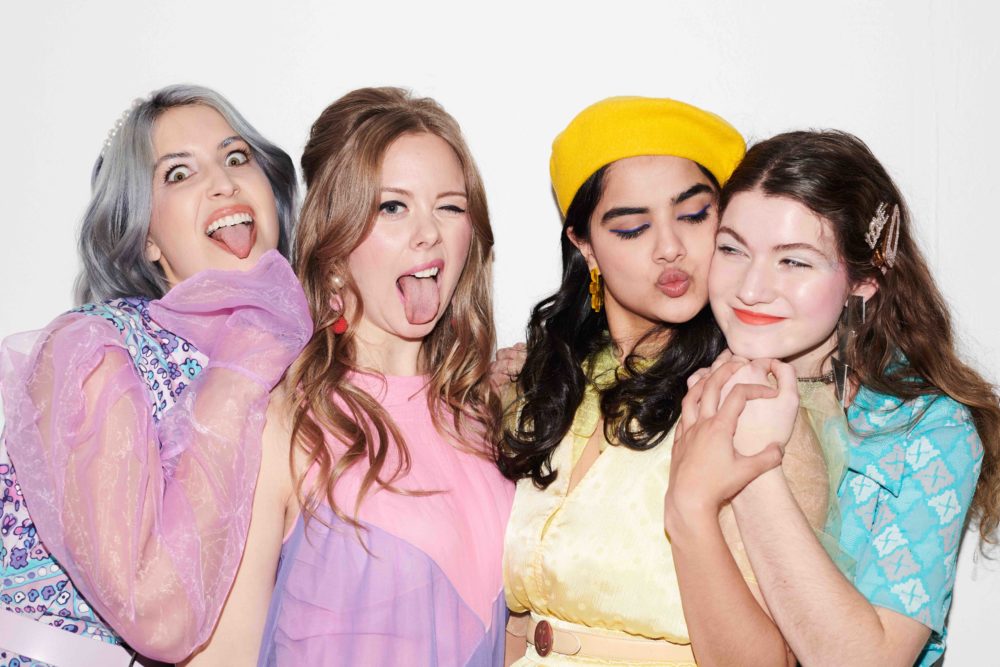 When life gives Hollye Bynum lemons, she makes lemonade. Her tart-yet-sweet rock band Razor Braids is all the proof you need; it didn’t really come together until a minor head injury sidelined the operatically-trained singer, forcing a recovery slow enough she had time to teach herself to play bass. Not long after, the current lineup began to solidify: first came guitarists Janie Peacock (a friend of Bynum’s old flame) and Jilly Karande (who jokes she joined the band “accidentally”), with drummer Hannah Nichols taking a seat behind the kit after her short-lived band Space Bitch shared a stage with Razor Braids at Punk Island. The quartet has played dozens of shows in Brooklyn venues, but hadn’t put anything to tape until recently, when they released their debut single “Nashville” on pink cassette with b-side “I Am.”

Now, Bynum and her crew find themselves with a pile of lemons again, as the Corona quarantine squashed everything they’d planned to promote “Nashville” – the release show at Baby’s All Right, the weekender tour, the dream of recording follow-up singles, shooting a glam video in dreamy upstate digs. But not even a pandemic could put a stop to their momentum; Razor Braids kept going. They turned their release show into a full-day event, where each member got to show off aspects of what they bring to the band: Bynum did a makeup tutorial; Peacock, who designs all the band’s posters and merch, drew personalized pictures for fans; Karande played covers that put her lovely back-up vocals front and center; Nichols, who’s a master barber by day, offered much-needed DIY haircut tips. And now, there’s a video for “Nashville” too. It may not be what Razor Braids had dreamed of – filmed over Zoom due to social distancing and edited in iMovie, it’s not exactly big budget – but it’s still silly, sexy, and ultra-endearing, a distracting little gem of a daydream, just like the song itself.

“It was tough to be so close to something that was exciting and that we had planned [but] we got right down to business once we knew everything was not gonna happen,” Bynum says. “I still wanted to honor the song and the hard work that we had put into it and I still wanted people to hear it – actually more so than before. I wanted it to provide some sort of sweet escape or momentary calm or fun or whatever the case may be.” Bynum built her “Nashville” lyrics from a series of sentimental vignettes, fleeting moments with a lover cropping up across each verse like over-exposed party-goers caught in Polaroid flashes. In her honeyed croon, Bynum confesses she “could live forever in that moment” when playing music, talking shit, and smoking weed with a crush leads to a spontaneous kiss.

The video, though, is more about the love and admiration Razor Braids have for each other. If you haven’t dressed up for a Zoom dance party with your besties to blow off a little steam, what have you even been doing in lockdown? The band employs the same monochromatic pastel outfit scheme they’ve been known to sport on stage (sort of like Powerpuff Girls playing really good rock music). Their aesthetic, they all agree, is an important component of Razor Braids, even if it’s mostly meant to up their entertainment value. “It’s feminine and nostalgic but also contemporary,” Bynum explains. Certainly, it’s hard to feel bummed when confronted with daisies, roller blades, glitter, and a candy-colored palette that would make Lisa Frank proud, but it’s the music itself that feels truly mollifying.

“The context of now has kind of enhanced the message and the meaning behind the song,” Peacock says. “It was already a feel good song before all of this happened. You listen to the song and reminisce. It’s a good distraction from what’s going on and a great way to feel like you’re a part of something, so it was interesting releasing it during this time.”

Karande says they often start off their shows with “Nashville,” because it helps the band find their groove. “‘Nashville’ is just one of those songs that feels like home base for all of us. It’s something that sets a tone – upbeat and positive and a fun way to introduce us that feels good to play live.”

Developing their songs in a live setting has given the band confidence to re-approach them, too, with a newfound collaborative spirit, one Nichols says she truly appreciates. “It’s hard to be creative if you don’t feel comfortable, like you can’t open up to the people you’re playing with,” she says. “Having been in several bands and seeing what works and what doesn’t, I feel like being in Razor Braids is a really nice balance of feeling like I have the freedom to write my own drum parts and express myself and also have plenty of material to work with.”

“When things are right, they flow,” Hollye adds. “It felt like something was kind of unlocked within myself by being with this group of women. Songwriting comes more easily to me. Playing my instrument, seeing things in a different way.”

For now, Razor Braids are doing what they can to preserve that magic long-distance, until it’s safe to return to some sense of normalcy, or at least their practice space. “We’ve been trying to capture that energy and positivity and just kind of meet the world where it’s at right now, trying our hand with recording stuff individually and seeing if we can piece together some little demos and things – just kind of figuring it out and trying to do it with excitement and energy,” Karande says. “That, I think, is very emblematic of who Razor Braids is.”