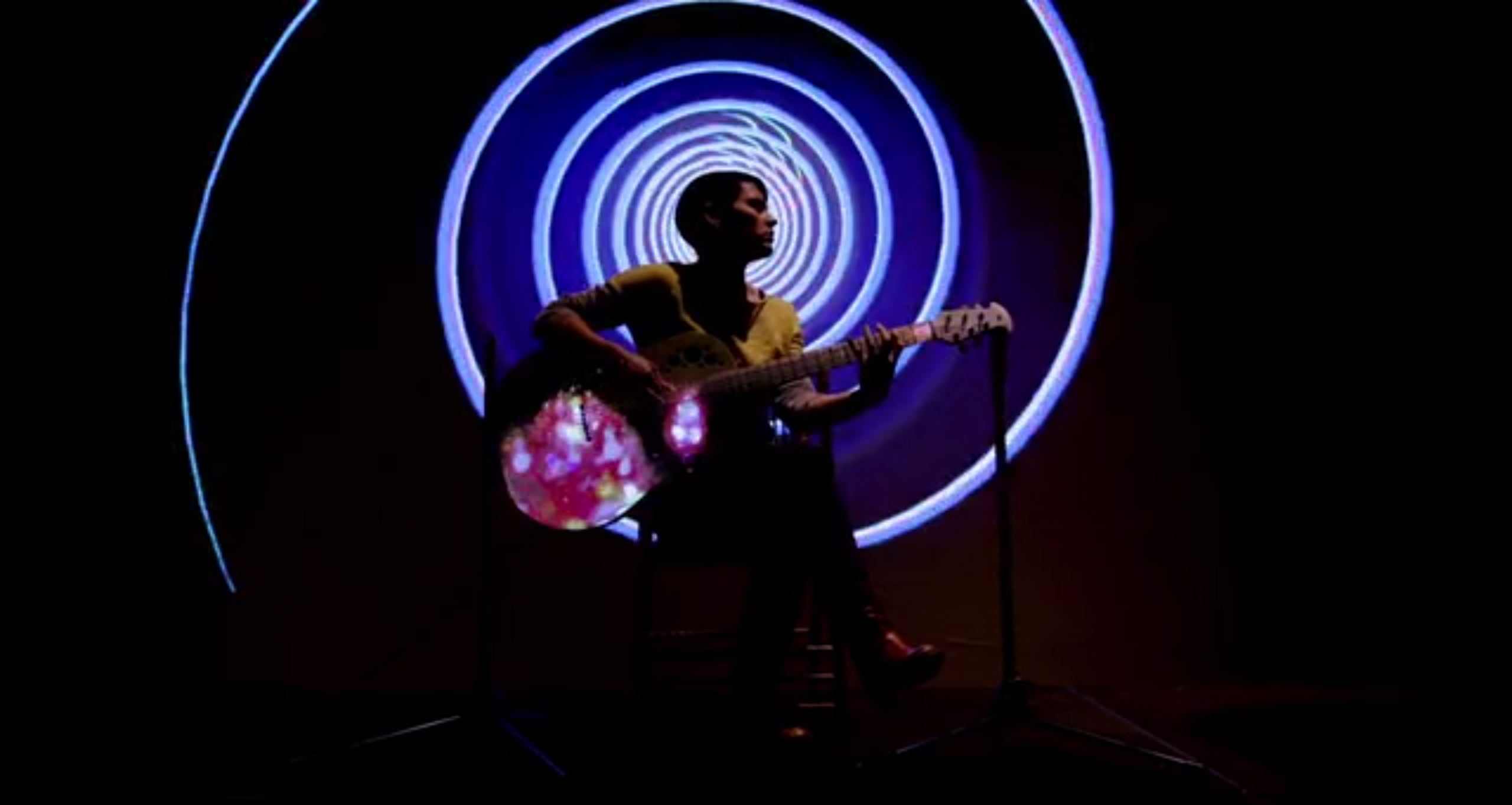 “As I’m playing, these images are telling this entire amazing story of creation, and travel, and how the guitar perceives itself, and all of this will happen as I’m playing live”

We often personify objects that are important to us. People name their cars, feel personal attachments to their childhood stuffed animals, or share deep secrets with their diaries. So even if Kaki King’s relationship with her custom-made Adamas guitar may sound a bit quirky, it is 100% understandable. We have all felt obsession and dependence on the inanimate, a feeling that increasing acutely when that object is the medium of our artistic expression. King has been playing her unique guitar stylings for some thirty years now, and as with any long-term love, there have been ups and downs.  “At this point I’m just a student,” she says. “What I love about the guitar and music is that there will always be more to learn.  I always hated the term ‘Guitar Goddess’ because of how utterly obnoxious it sounds.  Now I just ignore everything that anyone has to say about my playing.  I’m the only one who knows how much more I hope to accomplish.”

King’s unique and finessed guitar technique centers heavily around percussive finger picking and percussion, shifting from foreceful slaps to graceful, lightning-fast plucking, typically utilizing unorthodox tunings and complex rhythms.  She plays with painstaking precision, speed and care.  But King is just as interested in exploring the ideas behind the intrument’s very existence as she is in manipulating the sounds that come from it, and that is how her latest project, The Neck Is A Bridge To The Body, formed.  Funded via a Kickstarter campaign, The Neck Is A Bridge To The Body is a collaboration with Glowing Pictures.  Together, they created a one-hour multimedia audio/visual instrumental performance that centers around King’s guitar rather than King herself. In order to remove emphasis from herself, King used the white guitar as a projection screen, with images and lights projected onto the guitar as well as the large screen in the background.  “I knew I wanted to develop a lighting design for my solo show so I started looking at all kinds of options.  I learned that projection mapping could be done on a small scale, so I started to think about set pieces I could bring with me to project on.  Once I realized that I could project onto the guitar itself the ideas really started to flow–that was the key element.”

King had reached out to several video production houses, but Glowing Pictures came back with the most interest.  “I liked their aesthetic and their enthusiasm about trying something completely new like this,” King says.  “I approached them with a very basic idea: let’s do some projection mapping while I play guitar.  I had nothing else at the time, and I didn’t even know that I could project directly onto the guitar itself.  The songs and the script came out of months of conversations that followed.”

For the project to become what it would be, however, King needed a boost, so she turned to her fans.  “When we finally settled on a design and script for the show I realized that it was going to be way beyond my means to produce by myself.  Video and animation can be extremely expensive to create, so I turned to crowdfunding.  I looked at it basically as an open, fair marketplace, and I am so grateful to everyone who helped me go way beyond the goal.  Every cent has been put into the show and it made a tremendous difference.”

As it turns out, the she had quite a hand in the production.  “I wrote the script for the show–the outline and concept for the lighting elements that accompany each song.  I wrote, directed, and produced several short pieces of film that are part of the show.”  The Neck Is A Bridge To The Body straddled the line between reality and surrealism.  One of my favorite pieces demonstrated the subtle and the obvious beauty of New York City through a series of images that were projected on the background screen in one angle and on the guitar in another angle.  These images were as recognizable as Time Square, Chinatown, the Brooklyn Bridge, and they were as random as a shot of the J train, a Caribbean restaurant storefront, or a gas station.  “At one point,” King recalls, “I was driving around NYC with my co-director, Meg Scaff, who was hanging out of my sun roof getting all kinds of shots.”  For a more abstract part of the show, in which flowing puddles of pastel colored goop flowed and bounced rhythmically, King had to play Mad Scientist.  “I discovered what oobleck was and destroyed my kitchen mixing it with food coloring and filming it on a speaker cone.  I definitely developed a lot of different skills to bring this thing together.”

The best aspect of the performance was that it was unassuming and humble. The main focus of the show was to use various forms of media to tell a story. This did not always require the most technically aggressive guitar styling that we all know Kaki King is capable of.  Don’t get me wrong, there was plenty of her signature fingerstyle, but King knew when to hold back and when to let it go.

There were tongue-in-cheek elements, too.  About halfway through the performance, Kaki’s guitar “spoke” to the audience. An AIM-formatted text bubble appeared on both the guitar and the background screen, introducing itself. “Hi guys, I’m Kaki’s guitar. Are you enjoying the show?” After murmurs of approval, the guitar told the story about fitting in versus feeling different. In Williamsburg grocery store, the guitar was encountered a gang of “cool guitars” while minding its own business, picking up some eggs.  The cool guitars made fun of Kaki’s guitar for looking weird and having an odd tuning, and told the poor thing to go and play some of that “crappy new age music.” After getting its eggs smashed, King’s guitar returns to a family that doesn’t understand why the instrument can’t look and sound like all the other guitars. It finds solace alone in its room, listening to a Chet Atkins finger-picking record, realizing that it is important to play the type of music that you want to play no-matter what anyone says.

The Neck Is A Bridge To The Body succeeded in utilizing various forms of media to bring attention to the beauty of the guitar. From the beginning of the night, when Kaki King entered the stage dressed in white from head to toe (she even wore thick white sunglasses), to the end of the night when the lights came on and Kaki addressed the audience directly for the first time, I was intellectually, emotionally and creatively stimulated, but most importantly, entertained. It is one thing to be good at your craft, but it is something completely different to be so be so intimately in touch with the beauty of that craft in the way that Kaki King is.

“Collaborations and creating complementary music is so much easier than making music in a vacuum,” she says of the finished piece.  “If you have a vision or an emotional tone for something then you limit your musical options, so it’s usually easy for your gut to settle on something that will help build on whatever base is already there, be it a film or someone’s album.  It was easier to compose for The Neck for those reasons, as well as the fact that I had a script I had written in advance with individual vignettes that drew the narrative along.”

Kaki King will take the material on a national tour and it will see an album or DVD release in the coming months as well.  She’ll be touring with the fantastic string quartet, ETHEL, who makes another appearance on The Neck soundtrack.  She’s also premiering a piece for the ensemble Alarm Will Sound at Carnegie Hall in April and building out a new studio.  “And my wife is due to have our baby in August,” she adds.  “It’s going to be a very busy year.”