First openers Mainland were a fun group of NYC indie rockers, evidently young and still working out their stage presence. Brooklyn-based Dreamers followed soon after with a more seasoned sound and even catchier lyrics.  I’d easily peg Dreamers as a band to watch, and I can’t get their 90s pop-rockesque song “Waste My Night” out of my head.  Both bands got the energy up for the main event.

From the get-go in Atlas Genius’s set, for the majority of the synth and guitar-heavy songs, the vocals were being drowned out by the rest of the sounds.  Powerful harmonies in the song’s catchy choruses helped to carry the lead vocals out.

No less of a show was put on, however, as blinding strobe lights transported the crowd to the kind of dance club where you have room to flip your hair back and forth and wave your arms around like a madman.  It seemed as though everyone knew all the words from the very beginning, and Keith had no problem getting everyone to clap along to the beat to what seemed like every song.

Showcasing the band’s wide range of styles in their two-album repertoire,  songs like the bass-driven “Back Seat” and “Stockholm” were a little less indie pop and a little more rock show.  Contrarily, “Friendly Apes” and “Balladino” provided a nice slower change of pace without losing any energy. 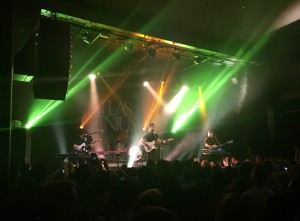 Most fun to watch wasn’t actually one of the brothers, but rather, Matt Fazzi on keys and rhythm guitar, clearly having the time of his life.  I also enjoyed watching a drunk fan wander on stage for their debut hit “Trojans,” only to be escorted off the stage by security.

The highlight of the night was a cover of Dead or Alive’s “You Spin Me Round (Like a Record),” giving the 80s synthpop hit a modern makeover. While the majority of the setlist was high-energy and danceable, the acoustic encore “Levitate” calmed things down and allowed Keith’s vocals to finally take center stage.