I’ve been called a masochist for going to Austin, TX’s South By South West festival so many years in a row. SXSW 2018 will be my eighth return trip and this year I’ll be an official artist with all three of my projects – Sharkmuffin, Ex-Girlfriends and Kino Kimino – totaling 17 sets in five days. Aside from the direct coffee IV I’ll be dragging around with me during the week, I’ll be taking my vitamins, (maybe) avoiding day drinking and eating at a lot of food trucks.

Navigating the music industry’s spring break for the first time can seem like a daunting task, so to help ease your South By South Stress, we talked to festival rookies Def.Grls and veterans Dentist, Leggy, and Boytoy, who have each made as many return trips to Austin as me. 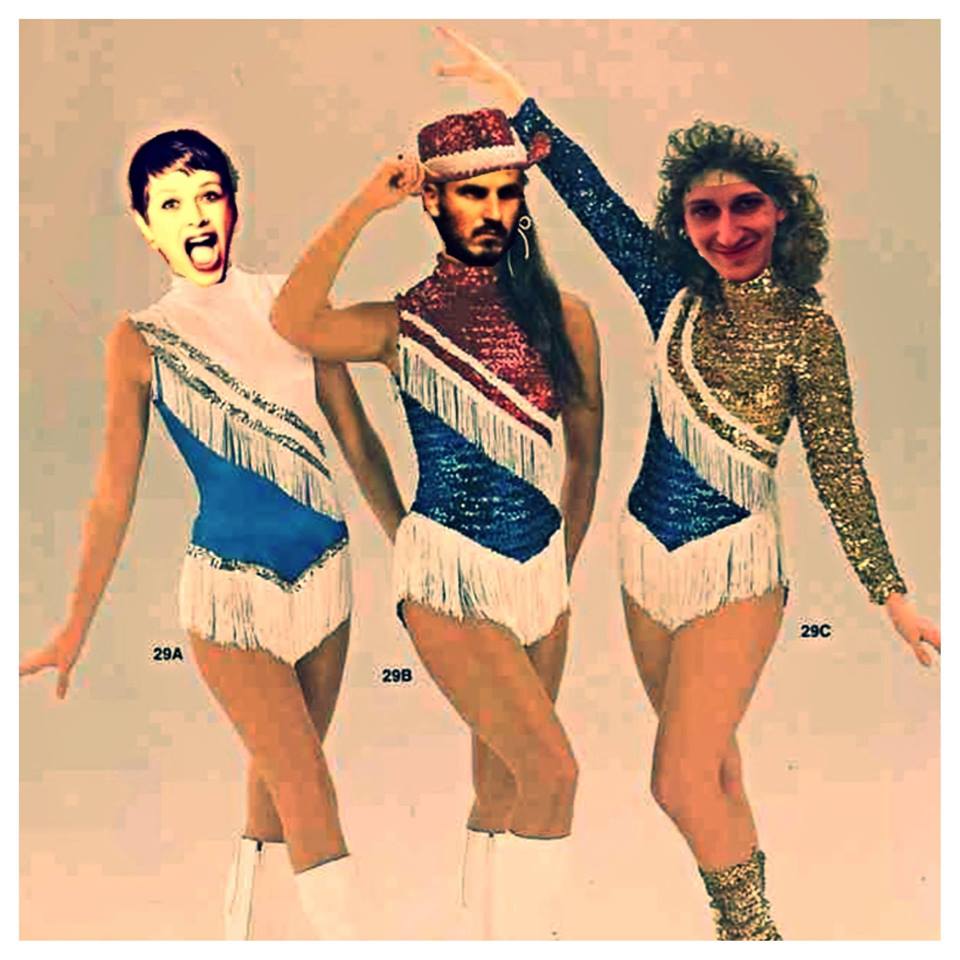 AF: What about SXSW are you most excited about?

Craig: I’m most excited to visit the city of Austin for the first time. I’m excited for my first ever SXSW experience. I’m excited for Mark to do all the drugs and feel all the emotions. And I can’t wait to win the official Def.GRLS tour game: The Great American Hero’s Quest; The Race for Badger’s Cup!

Hannah: I’m most excited for my first ever tour and that I get to be with the GRLS! I’m also excited to play a house show on the way at Carl Fike’s house in Little Rock!!! I’m also most excited by how Craig is already negative points in the official Def.GRLS tour game: The Great American Hero’s Quest; The Race for Badger’s Cup!

Craig: Hannah was the mastermind behind this tour so we’ll let her field this one.

Hannah: It was really confusing and hard and fun! And mostly successful due to the kindness of strangers on the internet. I went to bandcamp and listened to, like, infinity bands in the different cities that would maybe make sense to stop at along the way, and when I found one I really liked, I reached out being like “Hey, you wanna be friends??” And they all put me in touch with a second or third or fourth person who helped us set up all the shows along the way. So freaking cool and friendly.

AF: What SXSW shows are you playing?

Def.GRLS: We’re playing 4 unofficial showcases in Austin! Starting things off with a daytime set on Wednesday the 14th at the 6th annual Uglyfest at Cherrywood Coffeehouse and then playing again that night at the Nochebuena in Space party at Stay Gold! Then on Thursday the 15th, we’re playing on the Midcoast Takeover stage at Shangri-la (where Hannah’s brother is running sound!). Then on Saturday the 17th we’re going to wrap up our time in Austin at the Indicate Interest day party showcase at Hops and Grain!

AF: How are you going to pass the time on the road on your way to Texas?

Craig: We love to do Madlibs, listen to Aqua…

Craig: …gossiping about our frenemies. But mostly participation in the official Def.GRLS tour game: The Great American Hero’s Quest; The Race for Badger’s Cup is very demanding of our mind, body and soul.

Hannah: So true. The official Def.GRLS tour game: The Great American Hero’s Quest; The Race for Badger’s Cup tests each GRL’s mental, physical and psychic strengths. It says so right on the first page: 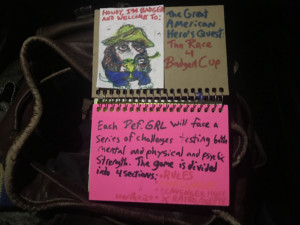 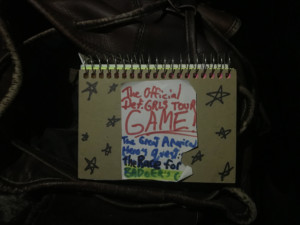 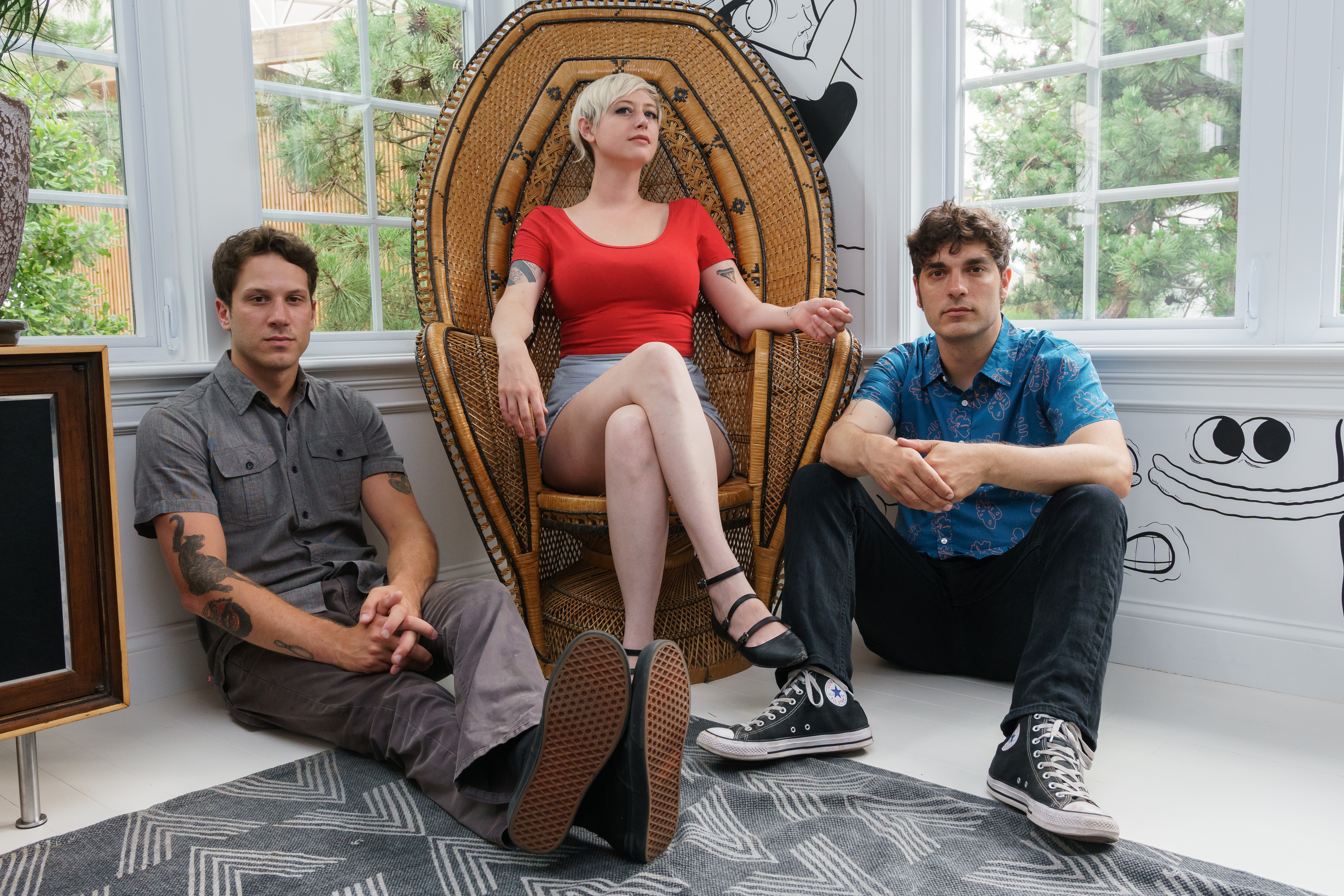 Our experience is somewhat limited at this point, but when we were there in 2016 we really enjoyed playing at the Hard Luck Lounge because they had a great outdoor section and a food truck outside with very tasty snacks. We always like playing outside when it’s nice out.

One of the days when we were hanging out and drinking, we ended up at some cowboy bar and this older guy, probably in his 60s or 70s, asked me to square dance with him. Turns out he must have been a professional or something. Even though I frequently line danced to “Achy Breaky Heart” in middle school during gym class, I couldn’t keep up and had to sit down after 15 minutes or so.  Not sure how crazy that is, but it’s a funny memory that comes to mind.

I think it’s all about a mindset. Normally at a certain point you would say to yourself, “I’m tired, time to go home,” but you just have to tell yourself that it’s only one week, and you can find time to sleep at some other point in the future.

Our official showcase is at BD Riley’s on March 15th at 10pm. Then we are playing two awesome unofficial shows with amazing lineups; the first one is March 15th starting at 4pm at Hard Luck Lounge and is presented by Little Dickman Records, the other is presented by Little Dickman Records, CoolDad Music, and Garden State Beards and is at Valhalla on March 17th starting at 11am. We are down to take on more stuff, so if anyone reading is doing a showcase and wants to reach out, go for it! We are really excited to see Wavves, Andrew W.K, Sharkmuffin, Parrot Dream, Fruit and Flowers, Ex Girlfriends, Pink Mexico, Beams, Albert Hammond Jr., Anna Burch, High Waisted, Kino Kimino, Boytoy, Grace Vonderkuhn and a bunch more I’m sure. 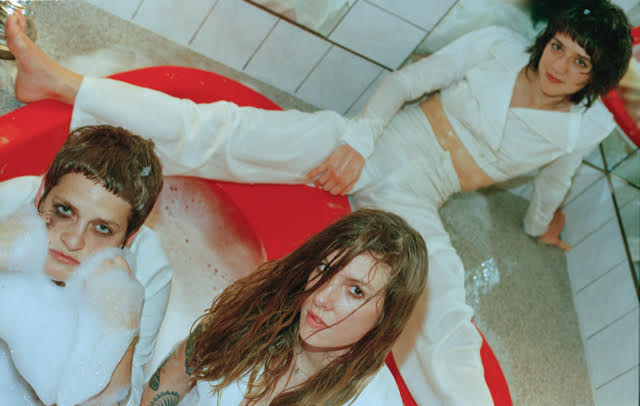 Hotel Vegas always has rad stuff going on. If we’re not playing a show we usually end up just hanging around there. We love the Bloody Marys at Rio Rita’s. Cheer Up Charlie’s is always a good show. And Spider House.

Chase: I MET MY TOP HEROES IN THE SAME DAY! I woke up and saw Michelle Obama speak on a panel, kissed Iggy Pop’s hand, saw the late Leon Russell play, and ran into Erykah Badu like three times.

Sara: Glenn and I did acid and watched Jacuzzi Boys play at Hotel Vegas. Everyone around us was so drunk and destroying the tree in the yard and that’s where I think it went downhill for Glenn. We went to see Sheer Mag play a show on a foot bridge at like 2am. The bridge was definitely swaying and Glenn kept checking the date the bridge was constructed thinking if it was gonna collapse she had her exit plan.

Adderall and day drinking. Don’t try to overachieve on show hopping. It’s usually better to pick a showcase and stay put for a few hours to avoid all the chaos.

Our schedule is so crazy that I’m not sure we’ll be able to have much free time to see other shows! Basically just the bands that will be playing right around our set times, so it’s cool most of them are our friends. We’ve found it’s better to stumble into thing rather than try to plan a schedule. The random finds are always the most gratifying. Chase wants to catch Princess Nokia. 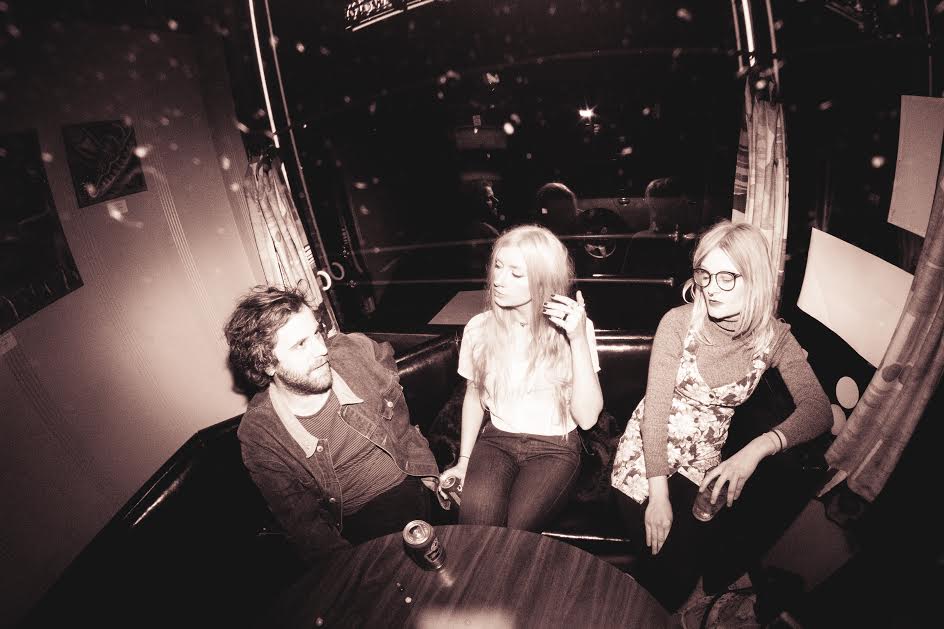 I really like the Whip In! We played there one SXSW – it’s a corner store, bar, venue, and Indian food restaurant combo. Pretty dank. Spider House and Cheer Up Charlies are also really great and beautiful.

We once rented a one bedroom apartment with three other bands, and that also included their assorted roadies, pals, and makeout partners. It was something like 22 people in there. Pretty amazing that anyone found a place to smooch! ;)

Go with the flow. Don’t be stressed if you can’t stick to a laid out plan of bands you want to see – things are crazy but fun! Always budget more time than you think you’ll need to make it to shows, especially if you’re playing. Austin is HOT! Bring sunscreen and summer clothes. Talk to everyone and make friends. You’ll probably see them again next year!!!

I’m most excited to check out the Old Flame Records Showcase at Swan Dive on 3/17 to catch some pals from Cincinnati (Lung and Dawg Yawp). I also really want to catch Say Sue Me (from Korea) because we are touring with them next month!