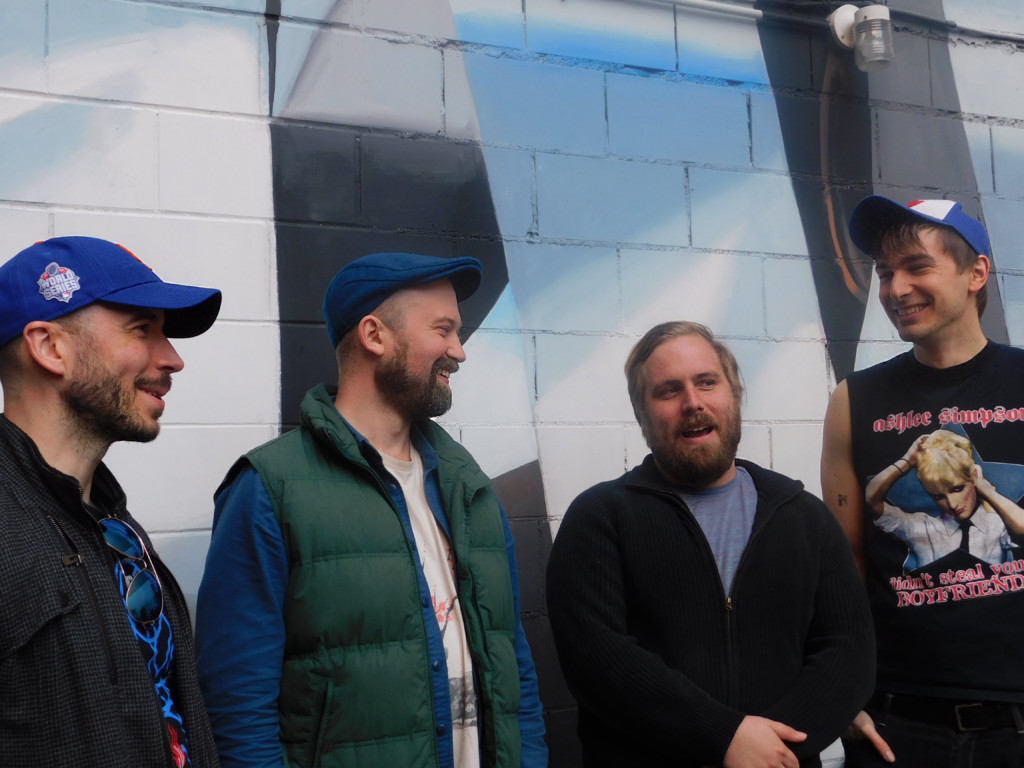 The family’s all capitalizing on Terry Edelman’s generosity, our breakfast tab running sky high. By “family” I mean half of Lost Kingdoms, John Barber and Dan Keller, scene queen Tarra Thiessen (my sun, my moon, my stars, our mutual friend, and AudioFemme’s Social Media Queen) and my broke-ass self. By “breakfast” I mean “bagels in the late afternoon.” We’re sheepishly grateful at the gesture, even though it’s standard Terry Edelman move—he’s perpetually warm, thoughtful, and strangely dad-like. Of all my subjects, I’ve been pretty well-acquainted with Terry, even before he starred in Sharkmuffin’s “Little Bird” video as Big Bird. Who else would fit the role? He’s both a comforting figurehead in this urban playground of ours, and approximately 8’2” (this might be fake news).

As a whole, I’m still getting to know Lost Kingdoms (which also includes Alex Major, en route with his girlfriend Gisela). So far, aside from being sidesplittingly funny, they put out searingly enjoyable and straightforward rock and roll that takes the occasional swerving detour. Terry uses his voice to solid effect, maintaining a strong yet high timber and then dipping back down into a range that’s surprisingly soulful. Simplified and summarized, my roommate heard me streaming Big Hits and thought it was a new Foo Fighters album.

But I think there’s more below the surface, so that’s why we’re having bagels and beer, on the generosity of one Terry Edelman.

The Scene: We’re taking up space at Bread Brothers Bagel Cafe after being evicted from Champ’s Diner. Though there’s a wide, thrilling variety of cream cheeses Terry and I stick with regular and veggie. Dan got chicken salad on an egg bagel, while John went really exotic: a pumpernickel everything with cranberry walnut chicken salad, lettuce, tomato, and onion. There’s even a pickle, the true marker of a fine dining establishment.

Tarra leaves to do her laundry, Alex and Gisela arrive, “Superstition” plays in the background, and we can launch into this conversation about…weirdly enough, music.

4:24 The brain is the only organ in the human body without pain receptors, according to Dan’s Snapple Real Fact. We’re actually having a hard time verifying this on Snapple’s website but we are learning that the two types of pain are “somatic” and “visceral.” “Emotional” isn’t mentioned, which means I’ve spent many nights weeping at Two Boots Williamsburg over aches that don’t exist.

It’s around here that John asks if I’m a comedian.

“Oh, no, I’m just socially awkward; this is how I survive,” I reply.

We tackle the usual Sunday afternoon subjects: autoerotic asphyxiation and Prospect Park’s Smorgasburg (Alex and Gisela were at the latter). Terry regales us with a tale of how he was scolded for stepping on someone’s shoe at Smorgasburg (“I was blocking her view of Ramen Burger”) and John remarks that Terry being tall did not help him. And then he asks me, “No seriously, are you a comedian? Because I heard you were a comedian.”

Terry quickly clarifies that he said I was funny; I clarify that I’m technically a journalist. “You’re a writer?” John confirms.

“Yeah, I’m writing…this column.” Just so it’s clear what my intentions are. 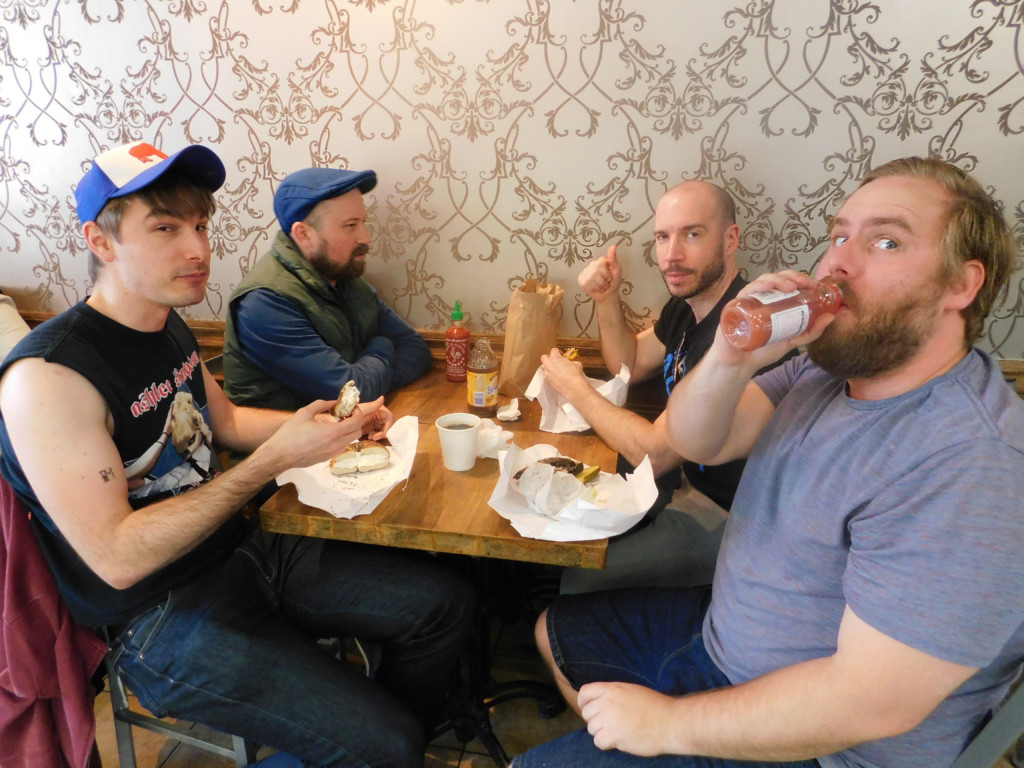 4:44 We’ve relocated to Tradesmen and are talking fashion. The boys are explaining how Dan has a shirt—an ironic shirt, if you will—from his Japanese friends that says, “I WANT BEER NOW.” But he doesn’t really want beer now. Or like, not with an all-caps intensity. It’s incidental that we’re currently drinking beer.

Briskness is overpowering the sunshine, so John’s wearing a borrowed sweater zipped up to the neck, looking like an author. Specifically the kind who lurks in Starbucks pretending to write the great American novel when really he’s just checking Facebook. Writers don’t really write anymore, anyway.

And I’m explaining how my show schedule gets busier when Summer Mary Grace emerges. That version of me is fully formed around June and blossoms when I begin wearing fishnets in April, without giving a shit that it’s 36 degrees out.

4:54 “Terry, I hear you’re in a band,” John says, deciding to subtly pepper our discussions with music talk. Usually these columns get conversed, not conducted; I talk about horror movies for two hours and then we go home. But sure, hold onto your goddamn hats, because we’re going to do something insane and have an interview. Our first official topic: the meaning behind “End Scene,” one of the newish songs the band has been playing live.

“It’s about mutually assured destruction,” Terry explains casually. It’s that core-of-the-Cold-War mentality, how countries have the power to bomb each other to oblivion and yet nobody does it for fear of the repercussions.

Somehow this briefly segues into chit-chat about owning a television before John asks, “Isn’t ‘Darwin’ about evolution?”

“It’s about the implication of agnosticism,” Terry clarifies.

“What’s the implication?” I ask, in my one exhausting stab of being a journalist.

Terry holds atheistic beliefs himself, but it’s certainly not a fun belief. “If there’s no spiritual realm beyond what we see, that’s kind of frightening,” he admits. 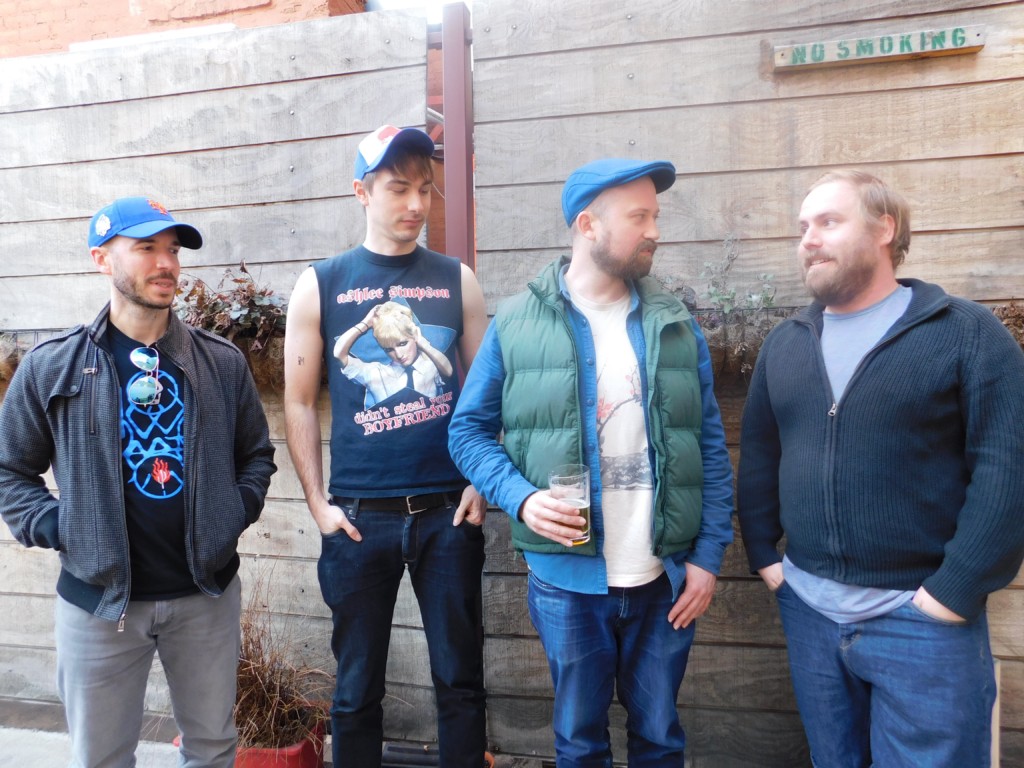 “I know what that’s about,” John says. “It’s about separating from your ex-girlfriend.”

There’s a pregnant pause, and then peals of laughter.

John’s insistent, believing it sounds very break-up-y with lines like “‘I got so much to say, when you’re 10 miles away'”

Except, “That is… not actually the lyric,” Terry says. More laughter.

But no, “Ten Miles” isn’t specifically about a break-up, it’s one of those songs that capture a feeling rather than an actual experience. “I’m very interested in sound, so when I write the melodies I just start sounding things out and then a few phrases emerge from that, and I build the concept around that,” Terry explains.

“What about “Breathe?” Alex asks.

5:10 “Breathe” is actually more about living in the Donald Trump administration and oh, what a terrible living nightmare that’s been (Dan: “He put us all in an awkward position.” John: “He reminds us that the country isn’t just New York and LA.”) Terry feels more compelled to tackle more socio-economic issues in his art, which is the noble belief held by most of our socially conscious friends. I start monologuing about how I’m insecure for not contributing to the political conversation, that my strength has always been to make people laugh and make them feel less alone when the world is falling apart (which it is, at rapid speed).

“And I feel selfish having this column and directing everyone’s energy somewhere else,” I conclude.

John earnestly believes the distraction is a helpful thing, but Terry knows where I’m coming from: “You do start to appraise everything you do as, ‘What does this actually contribute to society?'”

It’s here that our friend Lisa Mayer walks out to the terrace, to hang and to audit this article. “We’re in the middle of the a very professional interview,” I joke. “I’m not conducting it, but that’s what’s happening.”

“Hi band,” Lisa deadpans, because Lisa deadpans everything – Lisa laughs in deadpan. She asks who’s conducting it. There’s a lot of hemming and hawing at that one.

Terry’s response is the most accurate: “It’s conducting itself.”

“I feel like I’ve got two competing camps wanting me to either talk or not talk about music, and I don’t know what’s right,” he says.

“I don’t not want you to talk about music,” I say, in the middle of washing off Lisa’s lipstick. “You just talk about whatever feels right for you, that’s what this is about.”

“Yeah, what do you want to talk about, Terry?” John asks.

“Terry, can you write a song right now?” Alex asks.

But Gisela grounds us, asking, “What kind of emotion inspires your music?”

Terry ponders this. “Stress, desperation, impending doom, I don’t know.” He then goes on to explain that he digs sad music but can’t tolerate sad movies. “Depressing music to me is like, cathartic. You experience these thoughts, but then you feel better.” But an intense TV drama or a heavy-weighted movie will leave him devastated five hours later, and John relates to this: “Every time I think about [fusion_builder_container hundred_percent=”yes” overflow=”visible”][fusion_builder_row][fusion_builder_column type=”1_1″ background_position=”left top” background_color=”” border_size=”” border_color=”” border_style=”solid” spacing=”yes” background_image=”” background_repeat=”no-repeat” padding=”” margin_top=”0px” margin_bottom=”0px” class=”” id=”” animation_type=”” animation_speed=”0.3″ animation_direction=”left” hide_on_mobile=”no” center_content=”no” min_height=”none”][Room] I feel depressed, because – I don’t want to ruin it – but when she gets out – “

“So she gets out,” Lisa says. “You just ruined the entire movie for us.”

“That was actually the subtitle on the movie poster,” Terry offers. “Room: She Gets Out.”

The table provides a series of riffs before we stabilize and John can pinpoint why it bums him out: “She gets out and the trouble is not over. It’s more complicated and brutal.” And it’s a bizarre, serious moment, which passes mercifully quick. 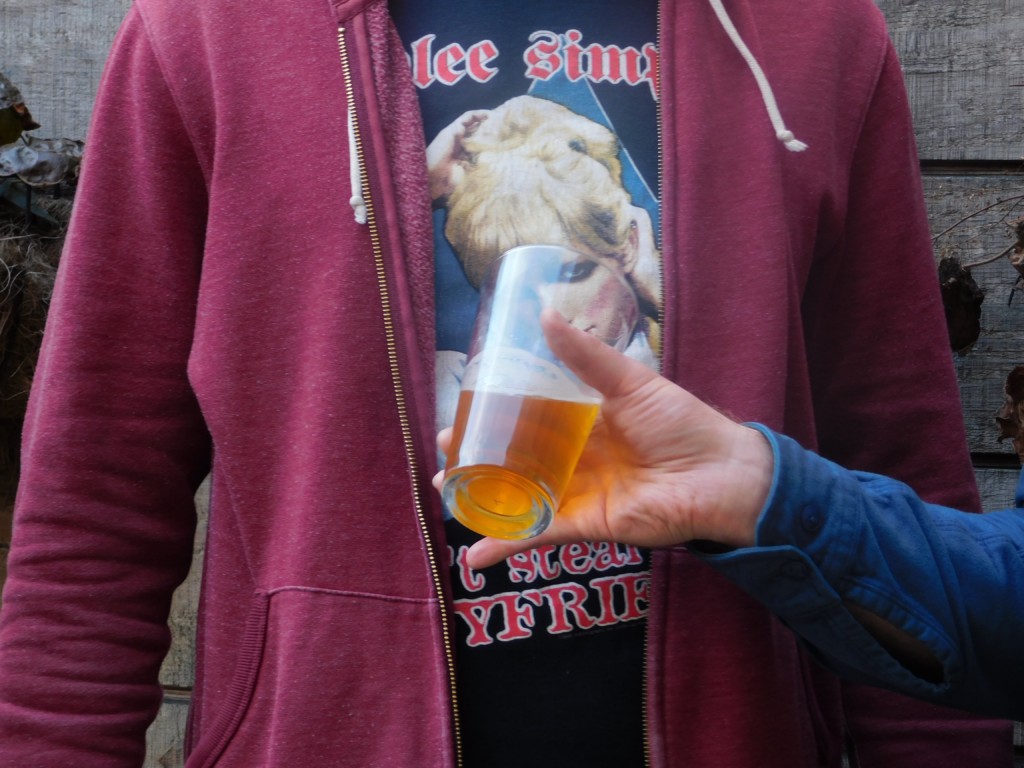 5:41 Here’s the deal with Terry’s Ashlee Simpson t-shirt. He and Dan used to have a band called Doctor Baby, a project in a Faith No More, Mr. Bungle vein, simultaneously hard and silly. They complimented that lack of seriousness by picking up teeny-bopper t-shirts at the thrift store. Dan had an American Idol shirt, while Terry gravitated toward Ashlee, and cut off the sleeves all on his own.

“The moment was right,” he says. “I was channeling Ashlee and she gave me the strength and precision I needed to execute it.” I’m moved.

“So what’s ‘Seeker’ about?” Alex asks. (Spoiler: it’s not about finding the perfect t-shirt)

“It’s about letting go of what you think you’re supposed to be in life,” Terry explains, and laughter spills all over the table again. “I’m glad you found that funny.”

6:00 “THE INTERVIEW IS OVER.” Lisa declares, to thunderous applause. It takes a while for all of us to formally disperse, but she ends up walking me halfway back home, amused by how this went down. She likes the way that, even with the show-friends we think we’re well-acquainted with, you don’t really know them unless you sit down with them. Again, it’s the point, the thesis, of this column.

Truth is, everyone has an immediate Brooklyn music scene family: a mother, a daughter, a sister, a husband, a creepy uncle, a stepdad, a mistress, and so on. Most faces, however, are regulated to third cousin status. You greet them in passing between sets, you one-arm-hug and make chit-chat, but you don’t know their secrets, you won’t be invited to their weddings. The shared bloodline is that we love listening to music, but we don’t always take the time to listen to each other.

I don’t know what art will be immortalized within our Brooklyn family, immediate and extended, but I’m grateful to Lost Kingdoms for daring to listen to me (and vice versa, I guess). No doubt they’ll be playing hard on our urban playground, and finding humor in the face of impending doom.[/fusion_builder_column][/fusion_builder_row][/fusion_builder_container]