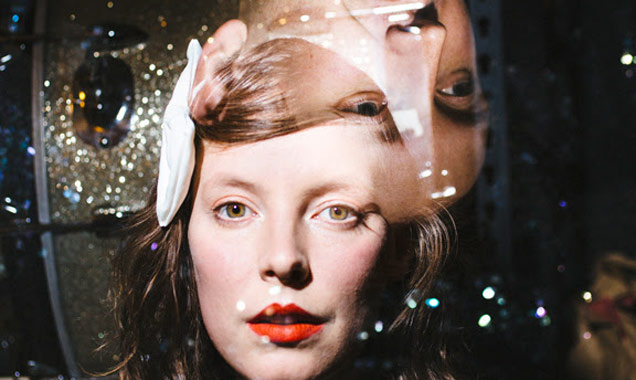 Sylvan Esso’s self-titled debut is a beautiful study in synergy. Combining the timeless, self-possessed sound of Amelia Meath’s velveteen vocals with cleverly nuanced, exultant electronic production from Nick Sanborn, the project has captivated an ever-growing fan base that includes the industry’s heaviest hitters (they’ve supported the likes of Justin Vernon and Merrill Garbus on national tours) all on the strength of just three Soundcloud offerings. The tracks on Sylvan Esso (streaming now on NPR) are as deceptively simple as those that precede its May 13th release on Partisan Records; all that’s at work here are Sanborn’s synths and beats and Meath’s melodic acrobatics, but the dynamics between these two elements elevate the abilities of the other at every turn.

If the formula seems done to death, it must be said that these two work so exquisitely together it feels entirely fresh. They both come from folksier backgrounds; Sanborn played with Megafaun while Meath was a founding member of Mountain Man. Much as she did during her time with that band, Meath elevates everyday experiences, thus revealing the poignance that can exist within the mundane. The narrative in “Uncatena,” for instance, centers on washing dishes and writing letters. Sanborn’s handling of Meath’s swooning, antiqued melodies comes off as preternatural; whether he lets them rest unadorned over subtle textures or manipulates her lines entirely to serve as a beat or movement in and of itself, it’s always expertly executed, respectful, and perfectly at home in its broader context.

Last January, we caught up with the pair as they kicked off a headlining tour at Baby’s All Right. Their easy give-and-take was apparent even in the way they riffed effortlessly on Star Trek, the inherent un-sexiness of playing baritone sax, or an upcoming tour stop in California in which each admitted they were looking forward to being served “overpriced juice” from a “surfer dude-babe” (Meath) or “vegan girl with an undercut” (Sanborn). “We can’t describe how grateful we feel to be headlining shows at all at this point. I mean we have like three songs on the internet. We’re just so grateful to people for being attentive,” gushes Sanborn.

There was plenty reason to take note of the band’s early online presence. “Hey Mami” introduced the group with a forward-thinking look at the realities of street harassment, though couched as it was in cheery playground handclaps it was just as easy to dance to as it was to provoke conversation about the dually damaging and uplifting nature of unwarranted comments from bystanders. “Cat-calling… happens, and it upsets me. You don’t know what to do,” Meath admits. “Sometimes, it happens and you’re like, ‘Fuck you, I feel really threatened and unsafe,’ and then someone will do it and you’re like, ‘Awww yeah! I’m gonna go home and think about you later.’ Or it’s an old guy who’s like ‘Bless you,’ and you’re like ‘YES!’”

The song was released on 12” as a means of placing the band’s music in a specific frame of reference from the get-go. Sanborn says, “We really wanted to contextualize it right away. We had this idea to do just an old school format – a 45RPM single with the full acapella instrumental. I’m a DJ, and all the old 12 inches I would buy [fusion_builder_container hundred_percent=”yes” overflow=”visible”][fusion_builder_row][fusion_builder_column type=”1_1″ background_position=”left top” background_color=”” border_size=”” border_color=”” border_style=”solid” spacing=”yes” background_image=”” background_repeat=”no-repeat” padding=”” margin_top=”0px” margin_bottom=”0px” class=”” id=”” animation_type=”” animation_speed=”0.3″ animation_direction=”left” hide_on_mobile=”no” center_content=”no” min_height=”none”][were like that]. It invites remixes, it puts it in a context that we always wanted it to be in since we started working together.” Though it appeared as a b-side to “Hey Mami,” “Play It Right” was actually their first collaboration. “I did a remix for a song she wrote for Mountain Man and that became ‘Play It Right’ and we just kept sending each other stuff that we thought the other one would be into,” Sanborn explains. Meath adds, “We both have very, very distinct sounds which are actually kind of disparate. People keep calling us fucking ‘electro-folk.’”

Call it whatever you want, but it works so well it’s hard to imagine either of them involved in projects more well-suited to their strengths (not to mention playing up each other’s). “Each of us tends to have instincts to do what we’re gonna do, which is why we have individual voices. But we try to serve the song first,” says Sanborn. His DJ intuition serves Sylvan Esso especially well on pumping club anthem “H.S.T.K.” Meath’s vocals are spry and jazzy at the song’s outset, bouncing over springy beats before growing sultry and daring on the line Don’t you wanna get some? Sanborn loops that line and builds the mood into a frenzy in which tiny, thoughtful flourishes pop like flashbulbs. Tracks like this are especially vibrant when performed live, perfectly suited for the sensual, hip-hop inspired gyrations Meath executes with a dancer’s grace.

Sylvan Esso have kept up a pace that could be hard for other bands to maintain. “It’s just two of us. It’s not like we have some machine that’s just gonna keep going for us,” Sanborn says. “We can predict what will be fun for us and what will be not fun for us. Already we’ve said no to things that we thought were a bad idea.” Meath cites the importance of naps, perspective and nutrition when it comes to stamina and maintaining a good attitude, stating, “The minute I start getting to be a Grumpus Maximus, [I know] something’s going on. What’s going on? Maybe you just need to eat a bagel.” “Could I Be,” a standout track on the LP, perfectly elucidates the exhilaration and exhaustion of that hustle. And it’s incredibly effective as a motivational tool; the chugging synths and persistent beats mirror the locomotion of the “train” that Meath refers to even as Sanborn distorts her voice into a mechanical whistle. Like “The Little Engine That Could” the moral of the story is that any goal is well within reach given solid hard work.

But it’s a respect for what the other brings to the table that makes this collaboration a resounding success. “We’re a partnership, just a man and a woman in a band on completely even footing, and that’s how we treat everything,” Sanborn says. “Really early on we established this relationship of being hyper honest when we didn’t like something. One of the best aspects of this band has been being able to argue pretty vehemently and not have emotions be involved.” Meath adds, “I’ll have this hook, I’ll sing it to him, and he’ll be like ‘Okay, cool. I have this beat.'” Then, Sanborn continues, “We just keep working on it til it’s something that we both like.”

It’s an exchange best illustrated by the metaphors within “Coffee,” a breakout track for the band that, at its most simple, is about dancing with a partner. Though it had been released only days prior, the audience at the Baby’s show knew every single word from opening lines True, it’s a dance, we know the moves / The bow, the dip, the woo, to the infectious Get up / Get down of the chorus, and Meath’s imploring Do you love me? sung so confidently you get the sense she knows the answer is always going to be ‘yes.’ She wrote a treatment for the joyous video that would accompany the track. “I sat down and studied music videos for like a week,” she says, detailing a syllabus that included TLC’s “No Scrubs,” Jon Hopkins’ “Open Eye Signal,” and Sean Paul’s “Get Busy.” It splices slow-mo scenes from various dance parties – subuirban gymnasium hoe-downs, 50’s sock-hops, jaded hipster house parties, and finally, a futuristic flash mob styled by Sylvan Esso’s friends at Dear Hearts, a boutique in their hometown of Durham, North Carolina. Sanborn says the video reflects “our whole aesthetic, referencing pop but pulling the things out of it that we love.”

Pop sensibility drives every track on the record. It comes from the rustic traditions that inform Meath’s style of singing as much as how her vocal gets filtered through Sanborn’s modern approach. “With electronic music you kind of have to reinvent the wheel a little bit,” he says. “Every facet of it: hardware, software… every part of musicianship and instrumentation is changing constantly. It’s really immediate and not entirely predictable. Electronic music is moving out of rigidity.” Whether highlighting the sinister courtship rituals of the modern male on “Wolf” or listless teenage shenanigans on “Dreamy Bruises,” Meath’s imaginative lyrics and their easygoing delivery haunt those purlieus with a finesse and elegance that magnifies the contributions of both performers. “It’s mostly just being really good partners in crime,” Meath says. They’re hardly committing felonies, though; as a record, Sylvan Esso feels more like a gift.