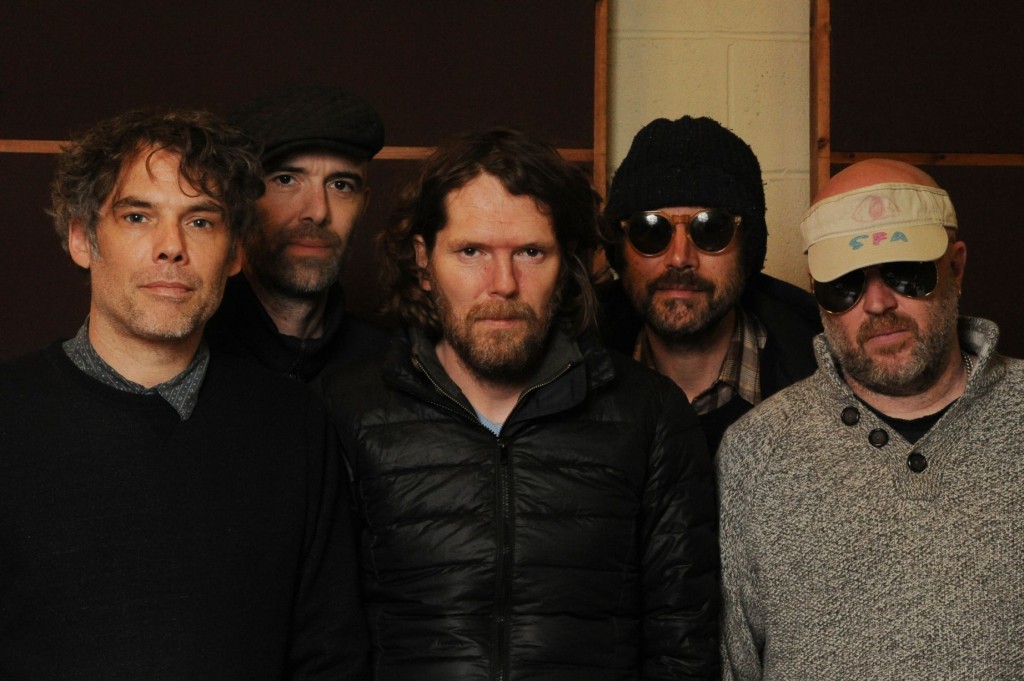 “I keep forgetting I’m on a boat!” Huw Bunford, lead guitarist of Wales’ Super Furry Animals, is sitting in a booth on the Hornblower Infinity, 4 Knots’s designated artists lounge for the one-day festival on Pier 84. “Sorry, I just saw the horizon go up and down (laughs).” It is mildly unsettling trying to hold composure for an interview while feeling the slightest swells rock us left and right. All around are musicians snacking on buffet cheeses and crackers, chatting and ordering drinks from the bar. In all honesty, I keep forgetting we’re on a boat too.

Bunford, or as he cordially introduces himself, “Bunf,” is soft spoken, gracious, and exceedingly kind. These are not three adjectives that leap to mind when one imagines a rock star who’s been in the biz twenty-odd years. There’s a lot more ease about him – a casual uncertainty regarding the future that typically marks bands in their first year. Perhaps it’s the well-rested temperament of a man whose band has just emerged from a six-year hiatus.

Super Furry Animals are not only touring again for the first time since 2009, they’re also riding high on the deluxe edition rerelease of their 2000 album Mwng (pronounced Mung as I learned the hard way). The record, sung entirely in Welsh, was anomalous not only to the band (all prior recordings were in English) but also to the U.K. music industry of the time, which was strongly steeped in Britpop.  But as opposed to the Beatle-ific, Kink-centric nods from contemporaries such as Oasis and Blur, Super Furry Animals took on everything from funk to psychedelic, to space rock. Their diverse sonic anatomy makes it difficult to solder them to any specific time period – which may be why a reissue and a resurrection is so appropriate.

Bunf was kind enough to take the time to answer a few pressing questions, and chat about iTunes, wltimate painting, and SFA’s biggest fan.

AudioFemme: Welcome back to New York!

AF: So you’re back from a hiatus, you just played Glastonbury, and you’ve reissued Mwng after 15 years; what’s it like touring together as a band now? Is there a different dynamic?

HB: No. It’s strange really, it’s just like none of us have been away. It’s a very bizarre feeling. Before we did Glastonbury we did a short tour just to publicize Mwng really-the reissue-and there were about eight dates around Britain, and that was the first time we’d played for six years and we rehearsed before it and Cian [fusion_builder_container hundred_percent=”yes” overflow=”visible”][fusion_builder_row][fusion_builder_column type=”1_1″ background_position=”left top” background_color=”” border_size=”” border_color=”” border_style=”solid” spacing=”yes” background_image=”” background_repeat=”no-repeat” padding=”” margin_top=”0px” margin_bottom=”0px” class=”” id=”” animation_type=”” animation_speed=”0.3″ animation_direction=”left” hide_on_mobile=”no” center_content=”no” min_height=”none”][Ciaran: keyboards, synths, etc] said when he walked in the first day, he looked in and our roadies had set up everything exactly as we’d remembered.

AF: It’s like when you talk to a friend you haven’t spoken to in a while and it’s as if no time has passed.

AF: What was it about Mwng in particular that you wanted to rerelease it instead of other records in your archive?

HB: Well, one thing about this is that there was no plan, it’s quite shambolic, a super loose idea where we had a few record companies like Sony and Domino who mentioned doing it years ago, and we sort of just never got our shit together and sorted it out. And then for some reason a year ago a guy from Domino bumped into Gruff [Rhys: lead vocals, guitar] and said “oh, we never did get that reissue….”

AF: I’ve read about it and I love that you all just say “oh we just forgot….”

HB: (laughs) Yeah, basically we were all just like (looks quizzical) “oh yeah….” But it just seemed right at the time. The idea of [reissuing] Mwng came out and Domino really jumped on it and was really amazing, and they made a really nice pressing. And Kliph Spurlock, who used to be the drummer for Flaming Lips is a massive fan-

AF: I would assume that the Flaming Lips may have been a fan of yours…

HB: Yeah, Kliph is, he’s a superfan. I first saw him in a gig in Lawrence, Kansas and I didn’t know who he was and he knew all the songs, all air drumming. So he then compiled a lot of outtakes and ATPs of Mwng so [the reissue] has about six sides. So that was worth pushing…worth doing something around it.

AF: I know one of the defining features of Mwng is that it’s sung entirely in Welsh. Looking back do you feel like that’s made a mark on contemporary Welsh music? Is it a thriving tradition or kind of an oddity?

HB: No, no, Wales has got a thriving musical scene, the Welsh language has its own radio station, and a lot of quite amazing bands really…a lot of young bands that really hold their own against anybody. And it’s healthy, you know, it’s not contrived I don’t think in any way, even though it’s a language that you might not associate with pop music, but it doesn’t matter really. In the end in a way, ironically, when we finally played America it was only when we came back and toured Mwng that’s when audiences in America thought ‘oh, these aren’t Britpop then’ because we’d been slightly lumped in by association.

AF: Which is so funny to me because I could not think of a further diversion from Britpop…

HB: It’s probably just because Creation [Records] and Oasis were out then and we came out then…I could see why people would sometimes think it…but not when they heard us (laughs). Once we started playing they were like “Oh, no, right.”

AF: What are you listening to now? Are there any new bands that you’re excited about or do you just go to the classics?

HB: Yeah, I like some new ones. Have you heard of Ultimate Painting?

HB: I’m kind of into Soundscapes as well, though they don’t really figure much in the Billboard 100, but yeah, it’s kind of weird…and documentaries as well…that’s what I listen to and watch really.

AF: This is actually paraphrasing something Gruff said from about 2009, but it was regarding the fact that you guys have always been a very album-centric band, and that was a time period when people really constructed albums from start to finish as a whole composition. And now we really are in this era of individual downloads. How do you feel as a band kind of in those two spaces? Do you feel like there’s even a chance for bands to have longevity anymore based on that?

HB: Well, no not really. I suppose to be cynical it’s a completely different business model now. Cuz in a way that’s how everything effects everything in the end, unfortunately. You know peoples’ habits change, technology has in a way pushed that into the way people have changed. There’s a small little niche for vinyl…it’ll never die out, because I think bands love to do albums in the end. If you’re a band you might not want to just stop at one song, even though the record company does…

AF: I know bands will continue to make albums, I just wonder if there are any bands that we listen to now that we’ll still be excited about in 15 years…that I question a lot. I hope, but I don’t know.

HB: Yeah, I know what you mean, because there might not be enough…

HB: Well, yeah, but when you think about it it’s inevitable. Pop will eat itself.

AF: Not to age you guys with this statement, but as a pre-internet band-

AF: I’m sure, I mean I would be if I had a band. Pre-internet. But, how do you feel about streaming services such as Spotify and Apple Music? It’s complicated…

HB: Well, yeah, it is. It’s a minefield really isn’t it? Some bands like U2 totally missed the point spectacularly and put out everything on iTunes and get a separate contracted deal with Ttunes for a zillion pounds but make it look like “hey, we’re giving it away!” and it’s a lot of massive bands that do that, so it must be quite difficult for bands who are starting out now if the precedent is: ‘give it away and something might happen’ it’s a very upside down business plan. You can embrace it as a way of getting something out there. When we were around starting, you’d have to have a press officer, you’d have to have an agency, all these kinds of things which were all parasitic of the record company, but they needed them to be there and the whole apparatus would work and you’d get onto morning shows and TV shows. But now that’s all out the window. I think that people were just too slow to realize it…if you stand still in this game you die.

AF: Yeah and once your standing you’re not even there for that long.

AF: I’ve read interviewers ask you guys about how having kids has affected your careers, but I’m curious to know how you guys have affected your kids with music. What kind of stuff are they listening to?

HB: Well now they’re just about getting to that age where they can really see what we did. Before they were a bit too young. They didn’t get it. So now they kind of, my kids are beginning to see that.

AF: Are they like ‘dad’s cool’ or are they kind of embarrassed?

HB: Yeaaaah, my kid’s eight-they’re all under 10 so still young, but you know, they don’t have any qualms saying ‘my dad’s a rock star’ to the milkman or something like that (laughs) that’s what they see, you know. But it’s funny you know, you try and downplay it but it’s sweet.

AF: I guess my last question would be, what’s next for you guys? A new album?

HB: Yeah, it’s just super loose. We don’t know. We’re taking it a week at a time. Well, not really, we’re doing almost like a festival tour up until the end of the season really. And then after that we’ll do something next year like the festivals and some of the things we didn’t get a chance to do, and that’s about as far as we’ve really stuck our necks out. But it’s good; it’s a nice feeling.

AF: But that’s nice, not being stressed out.

HB: Like I said, you know, people don’t really listen to albums anyway, so wha’ts the point of writing one? (Laughs)