New York City jewelry designer Laura Powers launched her fine jewelry line BRUCE earlier this year with its first collection, “Multitudes.” She is a self-taught jeweler and designer whose minimalist body of work mirrors the dynamic contradictions of nature.

I met Laura in the spring at my former local haunt, Roebling Tea Room (RIP). We were both regulars and the bartender had mentioned her impressive jewelry to me before. I was inspired by her work from the beginning. Powers creates smooth, sharp, soft, and strong 14k gold designs that capture the duality of life and embolden those who wear these pieces.

Audiofemme: When did you launch “Multitudes”?

AF: What is the significance of the name BRUCE?

LP: I had the HARDEST time naming my line and went through probably a dozen different names until one day BRUCE popped into my head.

There’s this movie called Dogtooth by Yorgos Lanthimos – it’s one of my all-time favorites. I won’t give away too much of the story but it’s about these three kids whose parents keep them on a compound and never let them out into the world. Their home is stunningly beautiful and comfortable but completely insular and everything about their lives is a little off. The parents are serious. The eldest daughter gets a peek into the real world through a series of events and starts to slowly assert her intellectual independence and explore her sexuality. At this point, she gives herself an alter ego and asks to be called Bruce.

The strict family aspect resonates because I was an early-identifiable atheist and my parents were strict Baptist Christians. More than that though, two years ago I left a long-term physically abusive relationship and learned first hand what it really feels like to pull myself out of a highly oppressive situation.

My jewelry line represents a lot for me – once I started to feel like a real, whole person, this line happened and I relate on many levels to the moment the eldest daughter came out from under her own sovereign oppression to become Bruce. It’s a namesake that represents unapologetic self-discovery and true singular power.

AF: How did you get your start creating jewelry and how has your style developed?

LP: Jewelry started as a distraction for me. I studied film production in college and was working for the History Channel editing World War II footage and was starting to feel very burnt out on it. I had a friend who made jewelry and it looked like fun so I just sort of picked up some pliers and started playing around. It turned out that I could sit at my little make-shift bench with my janky little tools for hours on end and not get tired of it. Once I realized that I was completely insatiable when it came to this work, I slowly shifted out of film and into jewelry over the course of the last four years. I’ve been working in fine jewelry full time for three years.

When I first started, my stuff was made of brass and raw minerals like citrine, amethyst, garnet, and pyrite. I was totally just learning as I went along and did a lot of trial and error. I used to buy crystals and drill holes in them in my bathroom. I occasionally used animal bone in some of the bigger, more dramatic pieces. My style has changed very dramatically. I moved from big, chunky crystal pieces with lots of parts to a more thoughtful, dialed-back, solid gold aesthetic.

I’ve been working as a jeweler at Catbird in Brooklyn for the last few years and recently moved into a design associate role there. Everything I’ve learned from them has helped me not only hone my skill set but also streamline my design. I think on top of being surrounded by the coolest fine jewelry and working with the seriously talented ladies of Catbird, I started allowing myself to really explore creatively as I’ve gotten older. It’s funny, as soon as I stopped thinking about how others would react to my work, my aesthetic solidified and my line totally took off. 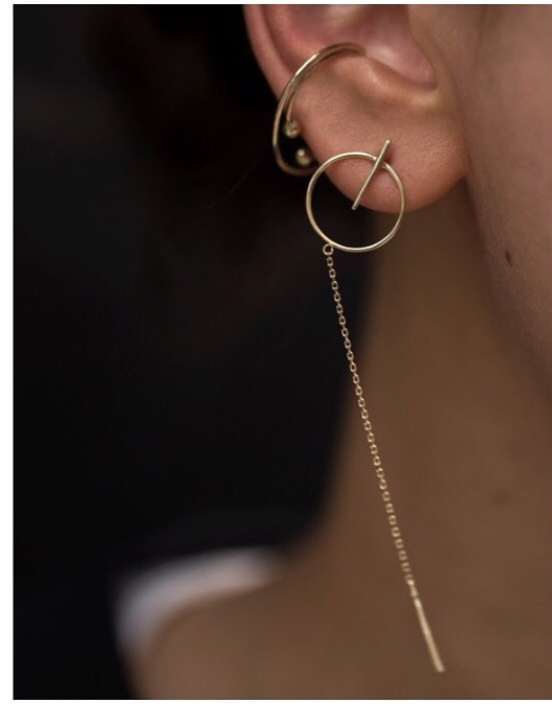 AF: What inspires your aesthetic?

LP: I’m inspired by a lot of intangibles. The biggest thing that moves me is the concept of dynamic contradiction – soft/strong, masculine/feminine, ordered/chaotic, loud/quiet all at the same time. I like to use smooth shapes and hard lines, unexpected solidity to feminine pieces, etc. I’m inspired by androgyny and uncertainty and exploration. Anything odd and overwhelming. I’m also endlessly inspired by the people who’ve come into my life and who’ve left it – by love, loss and grief, poetics.

I’m inspired by Neil Young and The Beatles and Joni Mitchell and Paul Simon and Karen Dalton because those sounds make me feel like a kid again. I cry every time I listen to Harvest Moon and crying does a lot for me creatively.

Iconic women inspire me – Björk, Winona Ryder, Kate Moss, Joan Didion, Cher, Sofia Coppola, Hedy Lamarr, Tavi Gevinson, Madonna, Jane Birkin, Lisa Bonet, Charlotte Gainsbourg and Lou Doillon… along with my brilliant close girlfriends who continuously inspire me through the work they do and the character they embody. I feel truly humbled by my luck in finding them.

AF: What materials do you like to work with?

LP: I work in fine jewelry so it’s all 14k above, yellow rose and white gold. For stones: diamonds, rubies, emeralds, sapphires, and opals. I’ve been playing around with mother of pearl and enamel for my upcoming collection and that’s been a really interesting new challenge.

AF: Do you create art in other mediums?

LP: I spend 99.9% of my time with gold and diamonds – running a company is more than a full-time job and I do that on top of my actual full-time job.

That said, I’ve recently started getting back to my storytelling roots, this time through writing instead of film. I’m working on a series of personal essays at the moment and working with the Gotham Writers Workshops on a memoir I hope to finish next year!

AF: Where do you like to get in the zone?

LP: When I’m in design mode I like to go to the Ace Hotel with my dog or disappear for several solo hours at one of my favorite dark bars in the city like Mr. Fongs, Clandestino, Rintintin, or Forgtmenot – I have a thing for habits and ritual. They help me settle.

AF: Where is your studio located?

LP: I do some work out of a couple different studios around the Williamsburg area and I also have an in-home studio in my apartment in Chelsea.

“Multitudes” can be found online and at Catbird located in Williamsburg. Follow Laura Powers on Instagram and look out for a new bold, beautiful BRUCE line to come April 2018!