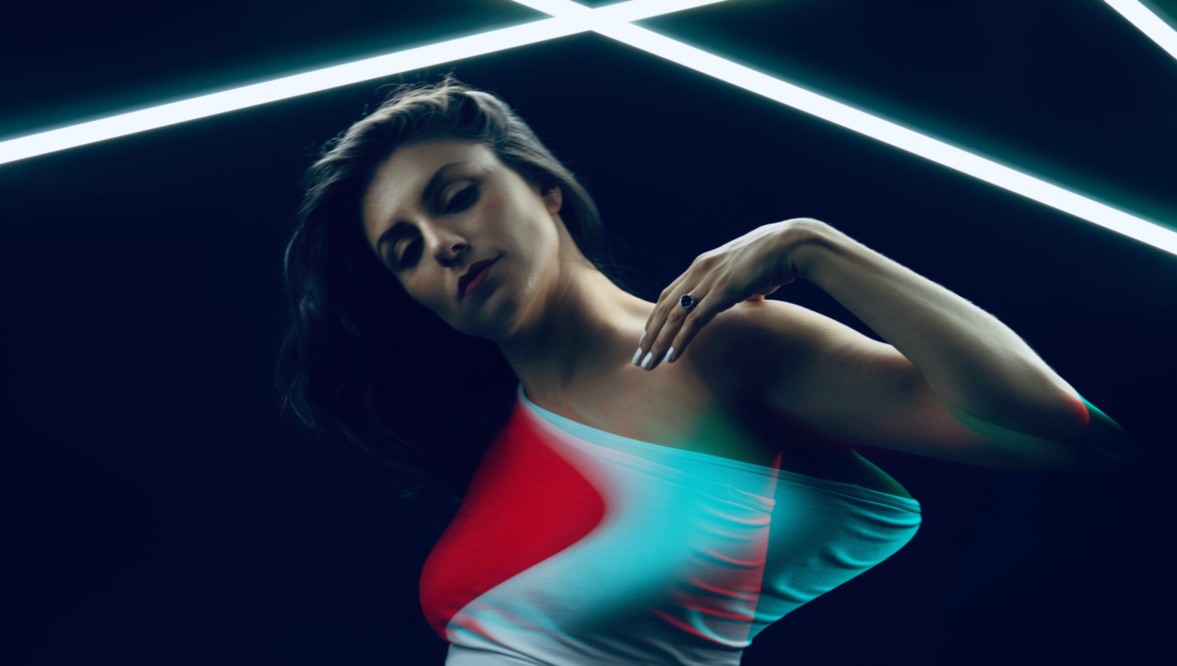 In Fritz Lang’s classic film Metropolis, the main character is jolted out of his privileged life and given a glimpse of the underbelly of the city, its workers struggling to survive while the bourgeois eat on plates of gold. New York-based experimental pop artist/female producer Dani DiCiaccio, aka KYOSi, takes the pleas of the proletariat and sets them against a steady dance beat: a modern protest in action that permeates her latest three-song EP, Negative Space. In the video for her single “Boo Radley,” KYOSi reimagines the mysterious Harper Lee character in To Kill A Mockingbird as a a modern day everyman, a mere “cog in the machine.”

“To me this is ALL about class and the juxtaposition of the haves and have-nots,” DiCiaccio said of the song. “I wrote the track after a long rehearsal in Soho, where I was two floors underground in a raw artist space. It’s one of the wildest and most hidden places I’d ever been in NYC, yet we were beneath a luxury building. As I walked around thinking about what it might be like to live there I got to thinking that the only reason those people want to be in a luxury building in that location is because artists and thinkers have done the hard work to make it desirable.”

The video utilizes archival footage from the industrial and worker’s revolution, its black and white moving pictures set within the faces of dancers Shareef Keyes and Frankie DiCiaccio. It’s a clear message that not much has changed since Harper Lee’s time, as the everyman continues to suffer under the boot of the 1%.

Watch Audiofemme’s exclusive premiere of “Boo Radley” and read our interview with KYOSi below.

AF: When did you first begin creating your own music?

DD: As a kid, really. I was a chorus and musical theater nerd in high school. And in my car I had a little book and a pen that never moved – the idea being that I would write everything I heard on the radio. Out of college I ran a non profit music studio in Ithaca and learned to use pro tools and logic there. I’d always been writing music but that’s when the creation process I use now started to codify.

AF: What artists were your early influences?

DD: Avishai Cohen, Björk, Boyz II Men, Samuel Barber, TV on the Radio. There are so many more but these are the ones that come to mind immediately.

AF: The video for “Boo Radley” feels very fresh. Can you tell us about the story boarding process, working with the dancers, etc?

DD: I put the idea into words and dug up some examples of things I like or wanted to emulate. Todd and I filmed Shareef and Frankie first and gave them complete control over the choreography. We asked them to try some things on the spot but for the most part they took the concept and ran with it. I’ve seen both of them dance so much and love the way they move – at most I’m “proficient” in dancing which is maybe why I appreciate it so much. So I had no doubt they would come up with something beautiful. Then we handed it off with the detailed brief to the motion designer, Jeff Watts. It took a lot of talking through it early on to poke holes in misunderstandings, getting the others’ ideas, all that.

AF: Why did you name the song after Boo Radley?

DD: I kept some qualities of the character, Boo Radley from To Kill a Mockingbird, like being misunderstood and brave, but then recontextualized him as a modern day Everyman; a cog in the machine that becomes almost sympathetic and protective to the machine itself.

AF: Your music layers in a lot of interesting soundscapes; “Negative Space,” in particular, had an interesting jazz vibe to it. Do you create sounds as you build the song in Ableton, or do you have a file earmarked “eclectic sounds”?

DD: Ha! Nah I don’t have a folder called that but good tip. I love jazz and I wrote this EP with Todd Brozman, who has roots in jazz. I think that’s one of the reasons we click.

AF: Civil action is a mainstay for your music. Do you normally begin writing with a subject in mind, or does the music inspire the subject matter?

DD: Neither, actually. Or at least I wouldn’t describe it that way. This is just what I’m thinking about, all the time lately. It usually starts with bass and drums, then I fill in the mid section with a pad or sample. Once the bones are there I put the track in my headphones and walk around NYC writing and see what happens.

AF: Who or what is currently inspiring you? Music, food, books?

Just got a subscription to New Yorker. I recently bought It Came From Something Awful by Dale Beran. I’m a big fan of Marc Maron’s podcast, WTF.

AF: You currently live in NYC. What are your favorite venues to perform in?

DD: I performed in the basement of Trans Pecos a couple years ago and it was dope. It got sweaty and packed and was just overall a great time. I’m dying to play National Sawdust – I hope to make that happen in 2020.

AF: What do you want someone to take away from a KYOSi show?

DD: I always want people to get the best sonic experience possible. I hope they walk away with a little melody in their head, or wanting to know more about the world I’ve created.