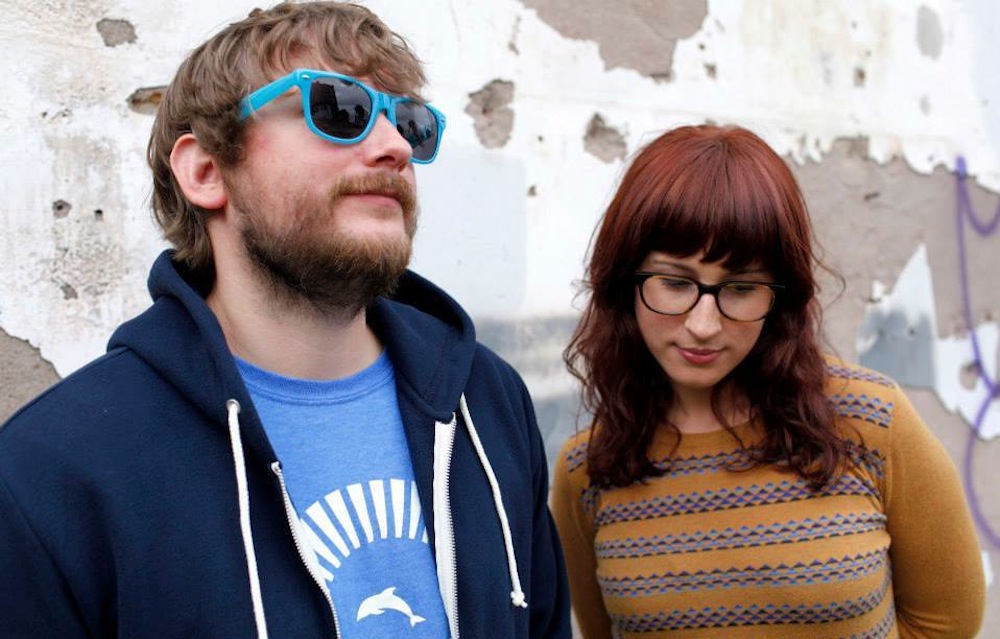 If you ask newlyweds Kim and Jarod Weldin what kind of music to expect from their duo Tape Waves, their response might be kind of vague. “Any adjective in front of pop,” Kim responded nonchalantly, when I asked, during our phone conversation last week, I asked her to describe the group’s sound. “Surf pop, dream pop,” Kim ticked off. “Surfy pop with some reverb vocals on top.”

The most important thing to know about the band–who are from Charleston, South Carolina– is that listening to them sounds like being at the beach. Their songs evoke the rhythms of gentle waves almost visually–and the over-saturated blue of the sky, and the glare of sunshine bouncing off the sand. Kim and Jarod love the ocean, and they have plenty of inspiration in their backyard. Kim’s a native South Carolinian who moved to Charleston for college, but Jarod grew up in profoundly un-balmy Syracuse, and left upstate New York to find someplace sunnier. But even more than a result of that scenery change, it’s clear, once you begin talking to Jarod and Kim, that their music’s relaxed dreaminess is a happy byproduct of their relationship with each other.

To put some whimsy in your next beach day, we’re bringing you a slice of real talk with Tape Waves. We’ve been excited to check out their brand new album Let You Go, out July 28th via Bleeding Gold Records, and especially the first track on that album: the mellow and luscious “Slow Days,” which we’re thrilled to premiere right here at AudioFemme! “Slow Days” kicks off with a weightless guitar line that, though far from flashy, sucks you in and slows you down until you’re running on Tape Waves time.  Read on to learn more about shyness, slow songs, and how the two members of this chilled-out Charleston outfit learned to wrangle their inner control freaks.

AudioFemme: What were your musical lives like before you met? How old were you when you started playing, and what were your first instruments?

KW: I played, like, basic punk rock with my sister. Some Sonic Youth-type stuff by myself.

AF: How did you meet? Did you start dating first, or playing music together first?

KW: We met at work. It was your typical awful call center. We found out that we had both played in bands before, growing up, and we started sharing recordings with each other that we’d done, and we went from there. We had mutual admiration. I think we started dating first. He very slowly brought me out of my shell. I was really shy and hadn’t done it for a long time. We went to shows a lot together, and we talked about music all the time, and we both loved music. I guess I thought that phase of my life was over. Jarod went and saw..Surfer Blood? Or, Built To Spill, I think it was–and he was really inspired to start writing music. He did some recordings, and I was really impressed with them, so I jokingly said “Let me be in your band!” And then I think I said, “Well, no seriously, go ahead and teach them to me.” We sat down, and he was going to teach them to me on the bass. Eventually, I started recording vocal ideas on top. It was very slow and casual. We would make up band names as a joke.

AF: When did you officially start calling yourselves a band?

KW: I think after our first recording.

JW: We’d finished the music and I just assumed that, if we were going to do anything with it, we’d need to go back and record some drum tracks, but Kim was just like, “Okay, wanna put ‘em online now?” I said, “Okay, I guess we just need a name then.”

KW: The first few songs were done, and I was eager to share them. We had to pull the trigger on a name.

JW: I was pretty persistent about that one. We had a bunch of ideas, but just about everything’s taken these days, so it took forever to find something we both liked. We came up with a few and I really liked Tape Waves a lot, and I wore her down on it.

KW: It’s grown on me. I like it now. I think it represents the way we sound.

AF: Are you inspired by living near the beach?

JW: Definitely. That’s why I started writing the songs that Kim was talking about earlier [after seeing the Built To Spill show], because I was inspired by living by the beach and I like a lot of the newer bands that popped up that were doing a similar sound. It’s definitely conscious, but I think at this point it’s just what comes out when both of us play. Originally, the beach was definitely an influence.

KW: Growing up down here [in South Carolina], beach music has a bad connotation because it’s the Shag area. [My inspiration] comes more from just living here, and from imagery of the beach, being on the coast and things that represent that sound.

AF: You guys just got married (congrats!). What kind of music did you have at your wedding? Did you perform?

KW: We didn’t. I kept joking that I was going to serenade him. It was super low-budget, on a friend’s yard on some property out on an island here. We just put our favorite songs on an iPod and ran it through a PA system outside. Then we made mix CDs for our guests.

JW: A lot of eighties hits.

KW: With some contemporary favorites like Beach House and Real Estate.

AF: What’s it been like for you to be married and also creative partners?

KW: Our songwriting process has gotten so easy now. At first, it was hard, uncomfortable, to work with someone who you just don’t know. I didn’t know what to expect. And Jarod wrote a lot of the music at first, so I felt like they were his songs, I guess, and I was just adding vocals on top of something that was already written. I think now that we’ve written so many songs together it feels easy.

AF: How was recording this album different than recording your first?

JW: Um, it was pretty similar. When we recorded the first EP, we were just recording it, and we didn’t have much of a purpose with it. We didn’t know that a ton of people would hear it. We didn’t know if anybody would hear it. But we kept a pretty similar process. It’s really kind of unbelievably simple, the way we record. We use one microphone and we do it all in our living room. So we still did that with this record, but we focused on the details more, like cleaning up little noises and trying to get better at guitar tones. Things like that.

AF: Why did you make the decision not to record it in a studio?

JW: We–with our life schedule, it kind of just works best to be like, okay, we feel like recording now so let’s record now. There’s a lot of freedom that helps the record in the long run. It’s a lot more work that way, but it also–we have a little bit more control. Kim definitely likes doing her vocals at home, instead of in front of somebody else.

KW: Right now I’m only comfortable with Jarod recording my vocals, because they take a lot of work. I sing whispery because we like the way it sounds, but I run out of breath a lot, and he’s really good at manipulating them to sound flawless and flowing. I’m really shy.

JW: She’s really hard on herself.

AF: What would you like to do most after this album drops?

JW: We’re doing a release show here that should be fun, with a friend of ours that’s an artist. I think we’re going to try to work on booking some short tours and writing some new songs.

KW: I’d love to make a video. That’s a goal that I have. It’s a matter of finding someone to work with, and a budget, and things like that.

AF: Would you direct it?

KW: I think so. We’re both control freaks.

AF: We’re so excited to premiere “Slow Days,” the opener to Let You Go. I just listened to it this afternoon and it’s amazing. Can you tell me how you wrote that song specifically?

JW: Yeah, that one was–we wrote it really late. Towards the end of writing the record, we still didn’t have a song that felt like the opener to the album. That one kind of–well, I started layering guitars on a loop pedal and came up with the main skeleton for the music. Kim heard it and said that it sounded like it should be the opener. We tried to do some chord changes and things, but we felt like we should just keep it all one flowing piece with some elements brought in and out through the song. Kind of similar to that New Order song we covered. How it’s just one main chord progression, with all these elements coming in and out.

KW: Also, we had been listening to the latest Yo La Tengo album Fade a lot. Every time we tried to change a chord, we just kept thinking, what would Yo La Tengo do? Let’s just let it build, the vocal layers and the guitar layers.

AF: Why did you want that sound for the opener, specifically?

JW: It’s interesting because it’s not a typical opener, it’s got a slower vibe. I like the way it ends, and the way the second song comes in. Its an interesting contrast.

KW: I think it’s a good introduction to us, because it’s subtle, but it reminds me of the water. It sounds like waves to me, the guitar part that Jarod did.
And there you have it, folks. Let You Go will be out on 7/28/14 via Bleeding Gold Records. You can preorder it here, and get a first listen to the luscious and mellow opening track “Slow Days” right here at AudioFemme! And always remember to ask yourself–what would Yo La Tengo do?