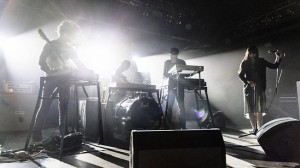 Longstanding The Mars Volta fans packed into Highline Ballroom this February 19th in anticipation of guitarist Omar Rodríguez-López‘s new music project.  The performance marked the band’s fifth show under the Bosnian Rainbows billing.  Rodríguez-López surprised fans throughout the night with his embrace of new ideas and fresh performance approach.  The night’s first twist was the presence of an opening band, which Rodríguez-López is usually known to forgo.

Opening band Marriages is most accurately described as mood-rock.  Singer Emma Ruth Rundle’s haunting, smoldering vocals are lulling yet carry weight. Her voice floats amidst power driven drum beats and an undertow of guitar slides, pitch bends, and rock guitar distortion.  The band is comprised of Greg Burns, Andrew Clinco, and Emma Ruth Rundle, who previously performed together in the post-rock collective Red Sparowes.  The group signed to Sargent House label in 2011 and released the album Kitsune in May 2012.

Marriages sound is uptempo yet darkly crafted and slightly unhinged.  The band is subdued in comparison to the following act, yet embodies similar emotional content.  The overall structure of the songs did not vary greatly, and I would have loved to hear the musicians step out into more experimental or unconventional instrumentation and delivery.  “Ten Tiny Fingers” was a stand out song in the set, with catchy guitar riffs and stark, punchy lyrics.  Other times the guitar effects create a wash of sound that carries over from song to song, and leaves less room for contrast.  At times the music delves into a sort of hypnotizing soundscape that results in some beautifully vulnerable moments.  Marriages has a strong sense of identity that will continue  to carry the music into deep, richly mood-driven territory.

Bosnian Rainbows is the new incarnation of Omar Rodríguez-López’s music project following the break up of his band The Mars Volta. The group consists of former TMV member Deantoni Parks on drums and keyboard, along with new members Nicci Kasper on keyboards and Teri Gender Bender on vocals.  Bosnian Rainbows holds on to Rodríguez-López’s past musical influences, but performs shorter, more stripped down songs with hooks and refrains geared more towards mainstream radio play.

Rodríguez-López considers Bosnian Rainbows to be a break away from the pattern in which he’s approached music over the last ten years.  In a 2012 interview with Australian Musician magazine, he states  “My first hurdle that I need to jump over is collaborating with my own band members, because for the last ten years it hasn’t been that way.”  Rodríguez-López goes on to say he’s held the reins as “dictator” of The Mars Volta, and he now seeks to harness the spirit of collaboration in his music writing process.  Bosnian Rainbows is the result of this new creative freedom. 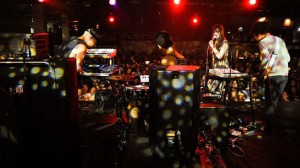 Hardcore TMV fans may be inclined to size Teri Gender Bender up before hearing and seeing her, and I admit I found it hard to imagine another lead singer taking the place of larger than life Cedric Bixler-Zavala.  Cedric’s distinct vocal contributions to The Mars Volta branded the music with raw emotional intensity, and a tortured, pressurized narrative.  Listeners can undeniably pick his voice out in mere seconds.  Yet when Teri Gender Bender took the stage at Highline Ballroom, I was won over by her wildly expressive voice and dangerous abandon, all within the course of the opening song.

Teri’s performance is exhilarating to watch as she becomes so absorbed in the music that at times she looks as though she’s forgotten the limitations of her own body.  She dances as though possessed by the music.  She throws herself out into the crowd without a moments notice. At one point she became so worked up that she punched herself in the throat while singing.  People in the crowd glanced at each other in shock and awe at witnessing such “rock n’ roll” conviction.  She’s a powerhouse.  Previously the lead singer in the punk rock duo Le Butcherettes, she is no stranger to the stage. Her vocals employ frankness and strength, and a beautiful depth of vulnerability, anger and theatricality.  She shines on songs “Torn Maps” and “Turtle Neck”, which give her more of a pop format to follow, and she is versatile enough to transition into effect heavy songs that wind on in Rodríguez-López’s expansive tradition.

The most thrilling aspect of Bosnian Rainbows’ performance is the excitement and passion these seasoned musicians imbue into their performance. The signature guitar stylings of Rodríguez-López were ever present, yet the songs had fresh influences contributed by Parks, Casper, and Teri.  Each band member has a dynamic personality that brings character to the performance, but audience members will find it hard to take their eyes off Teri Gender Bender.  She exudes endless energy throughout the  the show, and steals the spotlight with her intense conviction to the music.

This new project seems destined to make a mark in the commercial world, as well as among TMV’s mainstream-defying, dedicated fans.  It’s too early to tell if Bosnian Rainbows will be the first in a series of Rodríguez-López collaborations, or if the band will solidify and compete with TMV’s long track record.  Either way, Bosnian Rainbows embodies the rawness and excitement of an underground show, and the musicianship of seasoned performers.  The combination is a promise of many more surprises to come.