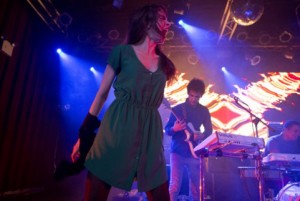 The Bowery Ballroom is a place I only remember through other people’s experiences. I’ve picked up at least two friends from the venue, each emerging from the darkness with tales of music, drink and being hit on by skinny hipsters. New York has an uncanny ability to recreate memories for you, and as I walked into the space I was immediately greeted by a few dejavu’s: the solemn look of the audience as they wait for the opener, the look of contempt from the people you share a couch with, and that beautiful look whiskey gives off…under any circumstance.

We sat in a back room with the light bulb twisted off (the overhead brights were too much to take) waiting for the opener; Rye Coalition had unexpectedly cancelled so it was up to Sacramento band Sister Crayon to bring the initial heat. Lead singer Terra Lopez’s voice cuts through ambient sounds to deliver clear, borderline operatic vocals; her dynamic with Dani Fernandez, who plays backing tracks, is arresting. Terra almost always sang in the direction of Dani, allowing the music to build seamlessly throughout the set. There isn’t a great deal of show in Sister Crayon, the feeling of watching the group ran parallel to the way they were lit: single colors, dark, unfocused; the perfect music for reflection.

The highlight of the set for me was Sister Crayon’s stellar performance of their single “Floating Heads”; the song has the right combination of the bands best traits: moody undertones, backed by the power of Lopez’s voice: “You can keep the past away. You can keep the past away. Mouthing mantras to make me calm, look at what I’ve done.” The band has gone through a lot of changes in the two years since their initial formation; Lopez and Fernandez performed as duo Silent and Clementine for the first year, before bringing in keys player Genarro Ulloa and drummer Nicholas Suhr. Lopez said of band’s name change: “I didn’t want to be shy anymore, and I wanted to have a name that was bolder, and a completely different alter ego”.

Bosnian Rainbows may relate to the feeling of changing alter egos. The band was created when ex-Mars Volta/At the Drive-In guitarist Omar Rodríguez-López invited Teri Gender Bender (Le Butcherettes), Deantoni Parks and Nicci Kasper (KUDU) to perform material off of Rodríguez-López’s Octopus Koolaid; it was during impromptu jam sessions that the group first saw the potential of starting a new band. Rodríguez-López said of the group “It’s completely different in that it’s completely collaborative. All four people are composing. We all have input on everything. A track can start from anything. It can go from a phrase that somebody likes lyrically to a track that the rest of us flesh out and flip around. The idea was to put together a group of four band leaders, four producers, four composers…Nobody has a reason to be here except wanting to serve the music”

The first time I saw Bosnian Rainbows live I watched Teri Gender Bender punch herself in the throat while singing. It is a moment that has come to epitomize the band for me: a group of artists who normally push back even in collaboration, finding a common ground to build upon. My own anticipation of their performance was apparent as I sucked down my whiskeys and talked excitedly beside dull-faced strangers.

In Gender Bender’s first moments on stage she stands like a rock; the music drifting around her body as she slowly bends, her voice expelling the words. The band works like a well-oiled machine: no lyric, no note out of place. The audience connects to the music through Gender Bender; it’s her hands they get to touch, her body that is flung out into the crowd, her bare feet moving lithely across the stage. “I use my body as an instrument”, she has said of her movements; indeed the way that she contorts her body throughout a performance has the power of speech. Just as she is the only band member who sings lead, she is also the only one who speaks between songs; her ‘thank yous’ are sweet and disarming, very different from her on stage persona.

The inclusive nature of the group is apparent within the scope of this debut album; it isn’t an album where one could pick out who wrote what. It has a great deal of range between singles, but the arc is decidedly spooky and popish. Bosnian Rainbow’s next project is a Spanish version of the same album. The group hopes that this will open up new doors in Latin Rock, as many concert venues in Latin America only allow acts that play in Spanish. Whether their next show is in Spanish or English, I know that I will be there.

The show was solid; entertaining; introspective and dangerous all at the same time. It’s music that forces your body to move, even though I doubt anyone would call it dance music. But I did dance. I danced to the beats of ‘Dig Right In Me’; I bounced to the hypnotic, sinister ‘I Cry For You’; I swayed to the lovelorn feel of ‘Turtleneck”.

Bosnian Rainbows doesn’t do encores. And as far as I can tell, there is no need for them to start. By the end of a Bosnian Rainbow show the audience is exhausted, drunk from the performance as well as the whiskey gingers.