Skip to content
There’s a certain art to being cool. It requires equal parts detachment, judgement, untouchability, andflippancy. Being cool might make you the envy of your less-than-coolcounterparts, but it’s ultimately an empty, lonely act. Because being vulnerable isn’t cool, being cool entailskeeping others at bay, elevating yourself to a level above theuncool, refusing to let anyone in, and never showing emotion orexcitement because it is somehow unbecoming. It’s a problem that isunique to my generation; though real “cool” barely exists anymoreexcept as a marketing concept many of us have been posturing eversince, fearful of ever revealing the uncool sides of ourselves,deprived of true connection in order to maintain the illusion ofcoolness, feeling pain only when the facade fails us. In the realworld, this looks like a dimly lit bar in which everyone nurses PBRfrom a can and no one talks to anyone. And in that bar, Frankie Rosefills the jukebox.

As a drummer for Vivian Girls, Dum DumGirls, and Crystal Stilts, Frankie Rose was at the forefront of theresurgence of a noise pop movement that took its cues from theintertwining jangle and grit of sixties garage rock and girl groups. In recording her first album as Frankie Rose and the Outs, she neverstrayed far from this sound. Her vocals had begun to take on adreamy sort of submerged quality with her first solo album, recorded under the moniker Frankie Rose and the Outs. But by and large the album, whileexpertly crafted, was nothing new. It was perfect in terms ofcontinuing the sound and vibe that made Frankie something of ahousehold name in indie rock circles. To some, the resume she’dbuilt was not only impressive but impenetrable, unapproachable. Butto be honest, it felt cold and rehearsed and well-worn to me, not arecord I could get behind on an emotional level. It wasn’t bad, butit it wasn’t life-altering and ultimately I lost interest. To jointhe Frankie cult I would have had to buy dark sunglasses and aleather jacket and thrown away all my clothing that wasn’t black, andI probably would have had to spit on anyone who talked about how intoAdele they were. But what I really wanted was license to feel andshare freely with my peers, not judge them or their tastes, not actlike mine are better than anyone else’s.

Here is what I like to imagine happenednext. Frankie was walking through the graffiti-scrawled streets ofWilliamsburg when a white light enveloped her and suddenly, the Earthwas no more than a blue speck far below. Her abductors, benevolentalien beings with glowing solar plexuses, took her on an epicinterplanetary voyage in which she witnessed incomprehensible formsof life and their bizarre customs, each of which held more meaningand beauty than her indie-rock royalty act. She was shown the errorof her ways and told to go forth to the earthly masses and write analbum with some heart, lest she be re-abducted and dissected. No longer obsessed with being cool and furthering her own reputationas purveyor of such, Frankie Rose came back to Brooklyn and wrote hergorgeous sophomore album, Interstellar.
While this may be a fanciful version of the truth, the end result is the same.  Interstellar, out now on Slumberland Records, gives having your head in the clouds a whole new meaning.  Frankie’s vocals sparkle and swirl like gauzy nebula gasses, the stuff of galaxies being born. The gritty guitars have been replacedby poppy riffs and spacious synths that reveal yearning and hope anda red-hot emotional core. Every second feels expansive, reminding usthat the big bang is still happening and that even as we rotate onthis rock we are hurtling through space. The lyrical content isn’tparticularly heavy and remainsrelatively carefree, but that’s not to say it suffers from any of that.  Rather, it feels much more relatable thananything she’s written to date. There areinstances (particularly “Know Me” “Daylight” and “NightSwim”) that recall the most impassioned moments of new wave, thoughthat heartfelt artfulness permeates each new song. Tracks like“Gospel/Grace” are still informed by the jangle pop of Frankie’sformer work but here she has made everything bigger, warmer, moreurgent and airy. Closing track “The Fall” is like listening to adream – the kind you go back to sleep for so you can keep dreamingit. Its hushed vocals unspool over a simplistic but indelible guitarline, diffused synths and a droning cello reminiscent of Arther Russell’s “This Is How We Walk On The Moon”. Listening toInterstellar basically made me reevaluate every snap judgement I’dever made about Frankie or her tunes. There’s a line in title trackand album opener that sums up the whole endeavor perfectly -“weightless, free from predictable ways”. Amen, sister, amen. 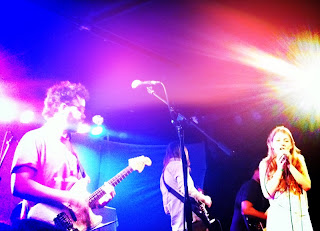 I got tickets to attend the releaseparty for Interstellar at Knitting Factory, expecting somegrand announcement, an ushering in to a new age of Frankie Rose. She’s one of the most influential musicians in the Brooklyn indiescene, so perhaps we’d all be given a crystal and told to let ourhearts breathe, to embrace each other and stop worrying about ourhaircuts. Night Manager opened with an enthusiastic batch of precocious noise pop anthems.  Somebands get on stage and act like it’s the most boring thing in theworld to be on stage, which is always annoying becauseeveryone at one point or another wants to be a rockstar. Night Manager can’t have had long to fantasize about such things –I’d say the average age of the five band members couldn’t have beenmuch over twenty – and that youthful exuberance was their strongestpoint. Their lead singer’s vibe was somewhere between Bethany Cosentino and Anne Margaret but I probably only make that connectionbecause I’ve been watching the third season of Mad Men while battlinga head cold.

I had high hopes for Dive, a(nother)Beach Fossils side project whose reverb-drenched singles are catchyand evocative of epiphanies had while staring at clouds. From thelooks of it, these guys really struggle to get dressed (evidenced by the rubber bands utilized to hold the guitarist’s pants in place) and speakingof haircuts – yikes. While their shoegazey tracks have a just-woke-up sort of haze, Dive’s performance was so boisterous it could have been a commercial for 5-hour energy shooters. The kineticset was incredibly fun to watch and included an unrecognizable take on a Nirvana song and a pornographic tee-shirt.  Dive’s debut EP is scheduledfor release next month on Captured Tracks, and seeing them play the material in such a spirited manner has me psyched for it.
Frankie Rose took the stage just after11PM with four band members, opening with the title track from the newrecord. The stage was bathed in starry projections, but there wereno house lights at all on Frankie or the majority of the band, whichreduced everyone but the drummer to indistinct silhouettes. Thatmight have been cool for a song or two, but they played the entireset that way, and it was slightly off-putting. Much like when youspend a hot day at the zoo and all the animals are sleeping insidefake caves, the lack of anything to rest eyes on was disappointingand disconnecting. Perhaps the lighting guy was in the bathroom,thinking he’d have plenty of time to light the stage once the bandreally got going. But he never had a chance – the show was overpractically before it began. The crowd, myself included, was justsettling in to Frankie’s performance, and then it abruptly endedafter they’d played for just under half an hour.

I’ve seen some short sets, but this oneleft me stunned in terms of its brevity. You’d think that with twoalbums of material she could have fleshed it out for another fifteenminutes, even with stage banter or something. I didn’t evenrecognize the new songs; I assumed she’d not played many of them butwas later informed she’d played seven of the ten new tracks fromInterstellar. The thing is, they were interpreted for the stage insuch a way that they might have belonged on older albums, in the workshe’d done with bands prior to striking out solo, in the detached,too-cool-for-school manner of everything that had come before. Therewas no trouble taken to document the evolution and preserve theopenness that makes Interstellar such a great album; instead Iwas reminded of all the reasons I’d felt put off by Frankie in thepast. She returned to the stage apologetically to play one moretrack (video of the encore is below) and finally asked for the house lights to beturned up a bit, though it was done begrudgingly by the house.
My overall impression was that Frankieis somehow afraid to bring her newfound sincerity into the spotlight bothliterally and figuratively. She was hiding the entire time –playing in the dark, rushing through the set as if nervous orembarrassed, and masking the intimate vibe of the new record behindthe practiced ways of her rock-n-roll persona. Perhaps this was aneffort to make the material more stage-ready but for me it had a numbing effect. I can only hope that in time she’ll figure out howto parlay the stirring ardency that makes Interstellar so salient, will becomecomfortable with letting any pretense fall away and be truly presentin the new material. I can imagine that day – Frankie stands onstage in a halo of white, assuredly plucking each note from herguitar strings, backed only by atmospheric keys and somber drums,letting Interstellar truly explode – vulnerable, earnest and farbeyond the trappings of coolness.