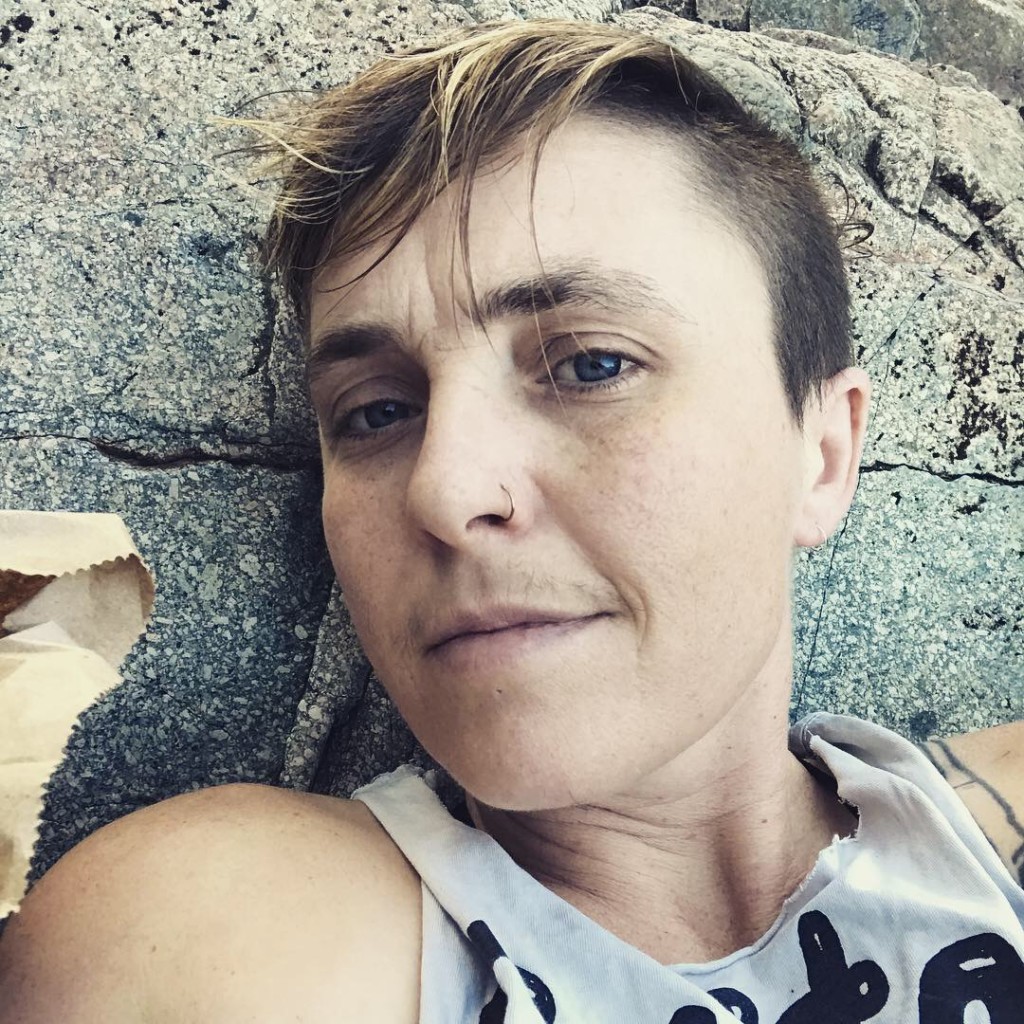 Kym Register’s voice is familiar, the kind of husky twang you traditionally hear on old country records. While the medium of folk music is timeworn, the stories Register spins have a modern slant, as they speak from the perspective of a genderqueer musician living in North Carolina.

“We gotta love that’s so hard to define / Still gotta work and we have to be kind / What is it worth if I’m always on your mind?” Register croons in “Stage Coach,” the second song off Loamlands new LP. Lez Dance is full of music that needs a few turns to truly make its way into your soul; the songs are sweet and complex, dripping with tender, forlorn love. “Maureen” is the kind of sleepy tune that sticks to your bones after a few listens, with haunting lyrics that paint pictures of romance under an Appalachian moon. It’s the raw need, the helpless surrender to passion, that make song after song stand out.

We spoke to Kym about their writing process and how they define their sound. Listen to Lez Dance and read our full interview below.

AF: You grew up listening to your parents’ records, Fleetwood Mac becoming a touchstone later on in your career. What caused you to reject that music initially and what led you back to it?

KR: I think rejection of authority and the need to find my own identity – basically preteen puberty – made me reject that kind of music in the first place. And to be clear – my parents listened to a lot of pop country and a little classic rock. Growing up in the south, classic rock was just the music that defined southern and elder, two concepts that as I grow older I start to embrace rather than reject. This isn’t to say that the rejection wasn’t important, but it feels natural to work through the stigma that I had surrounding country and classic rock and for this particular record, Lez Dance, gay culture. I suppose not everyone goes through as much anti identity as this. I don’t want to assume that it is normal for someone to constantly need to be individual or different. But that is a facet of counter culture or subculture and I’m very into the weirdness and wildness that comes from those movements.

AF: Music seems to be in your family line. You play your grandad’s electric guitar and even use his amp! Are there any lessons you’ve learned from your family in terms of writing and performing?

KR: I’ve moved on a bit from my grandad’s amp and guitar – but still have them and write with them! Music has always been in my family – but not as creators necessarily. My mom can’t carry a tune – but sings loudly anyway. I don’t remember a lot about my dad but I do remember that he loved old soul / beach music. I never knew most of my family well – and never saw my grandad perform except in his house with some smokey old men. So I think what I learned about performing I learned from my queer community, open mics, friends, parking decks, elders that took me on tour from a young age. I got to play the Fillmore in San Francisco at age 27 with The Mountain Goats because John [Darnielle] met my band at the time and just wanted to hang out, liked our energy. He’s not much older that I, but that kind of elder really showed me the ropes of booking and performing. All of the conversations I’ve had with “elder” performers albeit in age or experience like Mirah, Mal Blum, Sadie Dupuis, Kimya Dawson, Sharron Van Etten, Katty Otto, Amelia Meath – I mean so many female and queer folks that are open about their experience in this field – that’s who has taught me. I’m ever grateful and indebted to the kindness that these people, who I’ve made friends with and many who have been open on the fly during a tour or short hang, have shown me over the years!

AF: How do you go about writing a song? Do you start with lyrics or is the melody the jumping off point?

KR: I just hole up in the studio and start writing. First comes the tune – then comes whatever words are on my mind. Then I analyze – what am I thinking about? That’s generally the process. For some of the more historical / storyline songs I submerse myself in news and knowledge about a story that is captivating first, then just open the gates later. I’ll edit and make sure that I’m not slinging my privilege or skewed perspective all over the place (hopefully), but it’s really free form!

AF: Loamlands is described in many ways online: folk, country, rock, punk. How do you define the band’s sound?

KR: Just like that! Influenced by Bonnie Raitt / Stevie Nicks / Prince / Kim Deal (who I have tattooed on my body) and rounded out by friendships and queer community.

AF: Your music encompasses personal experiences, a genderqueer perspective, life in the South. It’s a punk soundtrack if there ever was one. Do you ever feel pressure to represent, to accurately encompass, to be a strong voice for these often marginalized groups?

KR: Thank you for asking! No! I don’t… I recognize the privilege in making music. I can only represent my experience and tell stories that I hear from others. I hope to be able to help create space for those that want / need to tell their own stories though. That’s what I think my whiteness and economic privilege can do. And to tell stories that speak to people both in an out of the south about queerness that either they can relate to or that can help them relate to others.

AF: What albums do you currently have spinning at home? Any new artists we should check out?

KR: So many!  LIZZO all the time. Your Heart Breaks and Nana Grizol and anything off of Cruisin Records. That new Daughter of Swords and Molle Sarle (Alex’s and then Molly’s new project from Mountain Man). Always Flock of Dimes (Jenn from Wye Oak) and old school Des Ark! Team Dresch is reuniting so a lot of that right now. So much! Courtney Barnett! Solar Halos who just released a new record!

AF: Where can folks see ya’ll live? And what could someone expect from a Loamlands show?

KR: Well, it’s stripped down through the fall to promote this new record. But it’s always an adventure. I’m very ADD and can tell a story or ten in one, depending. So there is definitely rambling and always something awkward – which I live for!

We have a smattering of full band and solo shows and are looking to hop on some tours this fall and record another record so – stay tuned!

Loamlands’ new LP Lez Dance will be out 6/7 on Cruisin Records.