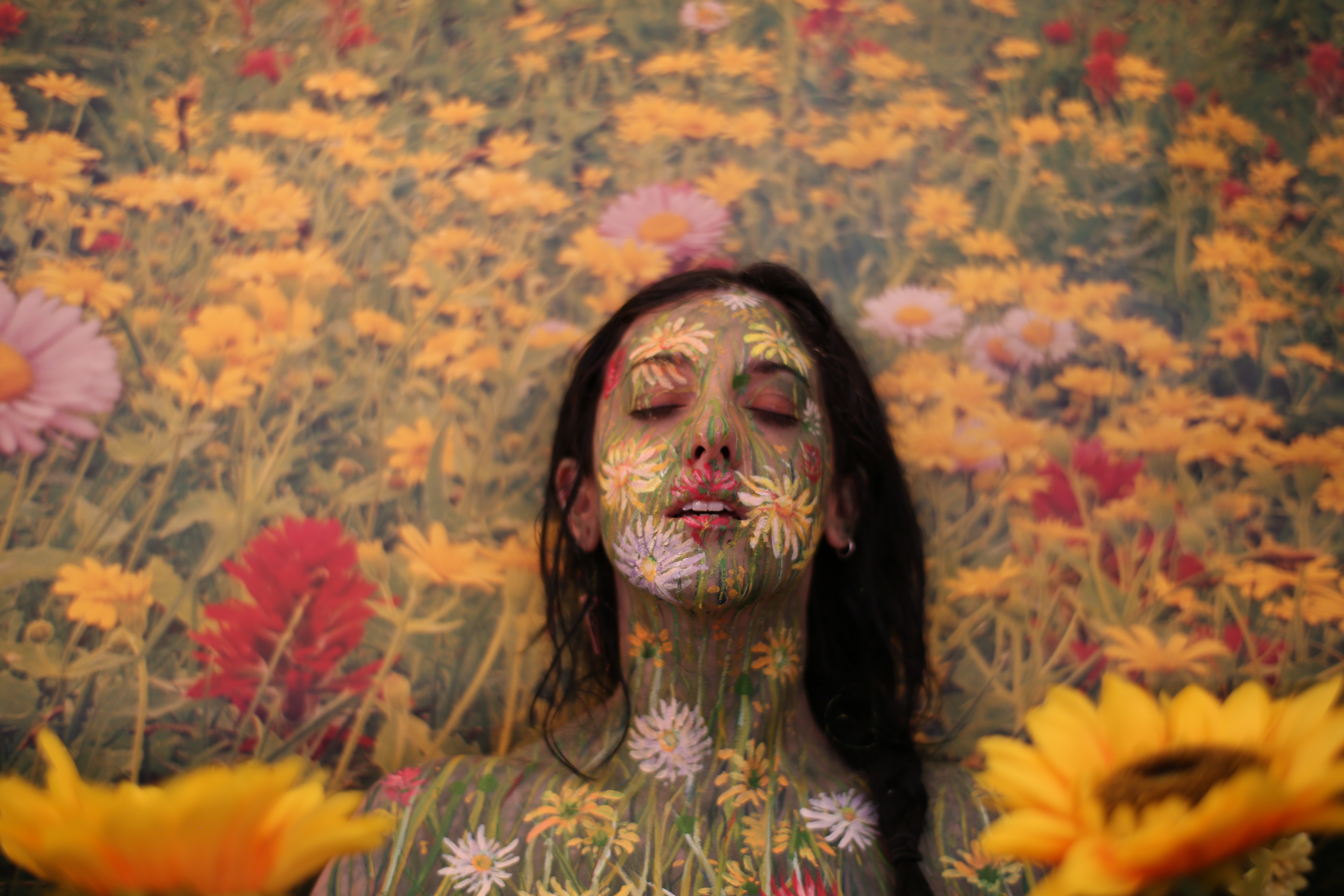 In her video for “The Pharmacy,” singer CrowJane appears as a demon with blank eyes and a mouth oozing black goo as she writhes in chains, her long, sharp fingernails nearly scratching herself as her shackled hands clench and release.

CrowJane (sometimes also credited as Heather Galipo) is best known for her work as guitarist for the goth-leaning, post-punk band Egrets on Ergot and vocalist for the noise rock outfit Prissy Whip. She’s also a makeup artist in the film industry, whose professional work includes special effects makeup. With her debut full-length, Mater Dolorosa, out on September 15, and its accompanying videos, CrowJane merges her aural and visual creative pursuits.

“I do this to so many people,” she says by phone from her home in Los Angeles. “It’s always good to get a taste of what it’s like to be in the makeup because then you remember, this kind of sucks. You can barely see. You can’t touch things. You have a bunch of black stuff in your mouth and it tastes gross.”

She worked with Paul Roessler, the musician and producer who has been active in the L.A. scene since the punk era, with credits that include The Screamers, Nina Hagen and 45 Grave.

The two first bonded when Roessler produced music for Egrets on Ergot. Galipo recalls Roessler bringing her into the studio and encouraging her to write songs. She had intended to stick with an acoustic guitar, but, as they worked, the music morphed into something experimental. They made percussion instruments and created tracks that would become rhythmic and atmospheric.

“It sort of started as a therapy session, to be honest,” says Galipo about the album. “It was a way to get through a battle with addiction and different hardships in my life having to do with abuse and the list could go on and on.”

Roessler became her “spiritual guide,” in addition to her producer, co-writer and friend, on what would be both a musical and personal journey (Galipo has now been sober for almost five years).

She had put those ten songs aside, though, while focusing on her other projects and they would stay on the back burner for several years. Then, when the COVID-19 pandemic hit in early 2020, she was left without work and had spare time on her hands. Galipo had considered releasing the album herself, but Roessler suggested that she try to work with a label. That led CrowJane to Kitten Robot, which is run by new wave singer Josie Cotton.

With the album release coming at a time when work is slim in the film world, CrowJane had friends join forces to (safely) make music videos.

The first of those clips, “Terminal Secrets,” was released in August and is an exercise in stop-motion animation, where CrowJane made masks of her own face. “I had never shot anything in stop-motion before and I really admire it,” she says. The clip was shot at 12 frames per second, as opposed to the usual 24 frames per second. “Even then, we would work for 10 hours or maybe a little less and then walk out of there with maybe 10 seconds of footage,” she says.

For a forthcoming video of her cover of James Brown’s song “Man’s World,” she used leftover prop hands to make a pet that looks like a hand in a snail shell. It’s her favorite piece that she’s made for the videos so far.

“Part of the reason that I got into makeup effects is because I was so in awe into what these people can create,” says Galipo. Having the opportunity to bring together her love of movie makeup and effects with her own music has been a special experience. “I get to exercise the muscles of all the things that I love to do creatively and it all comes together,” she says.

The timing of the album presented CrowJane with an opportunity to flex her visual art skills as part of the project in a way that might not have otherwise been possible. Also, the time that elapsed between recording the album and the release of it gave her a chance to reflect on the material. She says that the meaning of some of the lyrics have changed for her over the years.

“If I hear the words that I wrote, some of the things that I would write about my abusers, I realized that I was writing more about myself,” she says. “Now that I look back, it’s interesting to see how that progresses. I’m grateful for everything that I did. My life is in a much better place and I appreciate everything that art has given me.”