Ana Asnes Becker has been a staple in the Brooklyn music scene for quite some time now. Like many of our interviewees, Ana is quite Renaissance woman: beauty, brains, a big personality, and loads of talent. A few years ago, she left her job at The Wall Street Journal to pursue her music career full time. You have most likely heard Ana shredding up a storm with the vocals to match it on stage with garage stars Fruit & Flowers, or on their debut release Drug Tax. She has also whipped up some wicked guitar lines with post-punk heroes Big Bliss, dream poppers Holy Tunics, The Hum series, and in a few guest sets with Sharkmuffin. Ana is also an excellent illustrator and graphic designer. In the midst of all these projects, Ana picked up an additional role: adoring cat mom. And Ana just launched a new musical endeavor: CATTY.

AF: Please introduce us to your kitty!

AB: This is Bruce Squiggleman Kittowitz! He’s almost a year old, and super-affectionate. He’s a purr machine with a huge personality. He loves to snuggle, play fetch, steal human food, chase a laser, run the length of the apartment and back at full zoomy speed, and drink from the bathroom sink. Whenever Tim or I comes home he greets us at the door and meows at us until we give him hugs. He’s an excellent conversationalist. He sleeps next to my head every night. He’s Jewish, like his mom, and we’re looking forward to giving him a bar mitzvah when he turns 13 (which is around 2 in cat years).

AF: Did Bruce choose you or did you choose him? How did he come to be a part of your family?

AB: Tim [of Big Bliss] and I went to an adoption event in Union Square, flirting with the idea of adopting a cat. It was set up like a green market, except instead of fruit and vegetable stands there were rows and rows of stands from different pet adoption agencies, each with kittens and/or puppies. It was an unseasonably balmy day in September, and the animals were in cramped cages, in close quarters, in a very noisy, hot, and stressful place, getting poked and prodded. Most of the cats were VERY grumpy, understandably so. We walked around and held our hands out to kitties to sniff to try to make friends, but most of them just wanted to be left alone. When we came over to Bruce’s cage and I held out my hand, he sauntered right over and put his little paw in my palm. And then he did the same with Tim. We fell in love right away. He was the chillest little dude, totally unbothered, with such a sweet temperament. Also, Tim’s all-time favorite superhero is Batman, and Bruce, then named “Midnight,” had “I am the night, I am Batman” on the back of his name tag. We took it as a sign. (And then after some deliberation renamed him Bruce after Bruce Wayne.)

AF: Did you have pets growing up?

AB: I had a golden retriever named Jessie at my dad’s house, and a cat named Herman at my mom’s house. I miss them both. Jessie was the best. Excitable and kind of dumb and just a big ol’ fuzzy love bucket. Herman was my homeboy. He was declawed in the front (before we adopted him) and he still managed to be quite a formidable hunter.

AF: When did you start playing music and what was your inspiration to start?

AB: I got my first guitar for an early 14th birthday present from my dad. He was a guitarist – never did it professionally but he was an incredible player. I was a freshman in high school, and he had just been diagnosed with terminal cancer. I wanted to learn to play so that I’d have something to connect me to him after he died. It worked. I also wanted to impress a boy. That part didn’t work.

AF: What was your very first instrument?

AB: My first instrument, after recorder that is, was trombone. I got it for school band in 4th grade. Trombone was my first-pick instrument so I was super excited, but we quickly realized that my arms were too short to play it. So the school gave me a baritone… which is like a half-sized tuba. It was ridiculous. I swear they gave the smallest kid a huge instrument just for a laugh. I quit band as soon as I could.

AF: How did Fruit & Flowers come to be?

AB: Caroline and our original drummer Shaw came up with the name of the project and started jamming with the idea of starting a band. Caroline met our original rhythm guitarist Lyzi at a Sharkmuffin show and invited her to play. I was friends with Shaw, he’d seen my band City Mice so he knew I could play, and he invited me to come to a practice. The four of us got together as Fruit & Flowers and had to race to write and practice a set before our first show, which had already been booked, and was only a month away. After a few months Shaw went off to pursue career goals, and we were joined by the excellent Jose Berrio on drums. We’ve also recently added Claire Wardlaw on saxophone and synth. Fruit & Flowers owes so much to Sharkmuffin – you’ve helped us out so much along the way, and who knows what the band would’ve wound up like without you!

AF: I know Fruit & Flowers is a collaborative effort. Can you tell us about your writing process?

AB: Most of the time, songs start organically, from a riff or beat someone is playing in the practice space, and we build the songs from there. Lately I have also been bringing in some material that I’ve written on my own, and we’ve finished the songs up as a group.

AF: Can you tell us a little about your new project CATTY?

AB: Sure! It started by complete accident. Matt Sklar from Parrot Dream put together a band lottery on January 5th – an all-day endeavor wherein random bands were formed at noon by picking names out of a hat, and then everyone went off to write a couple of songs together, and then the bands regrouped to play a show that same night. I wound up in a group with Don Lavis, also from Parrot Dream, Manny Nomikos from Gracie Mansion, and Bryan Thornton from Holy Tunics. It was an EXTREMELY lucky match up. We enjoyed playing and writing together so much that we decided to keep it going!

AF: Is it safe to say you identify with cats as your spirit animal?

AB: Hmm, I think I’m personally more like a dog than like a cat, but I could be wrong about that. Maybe something like a coyote or fox (canine but with some cat-like qualities). Or a starling. Jose says llama, because I’ve recently become very attached to a stuffed animal llama that I made Tim buy me in Austin for $5. I named it Brimothy, Bruce + Timothy, because those are the boys I miss most.

AF: You are on the road with Fruit & Flowers right now. Any funny stories to share?

AB: We were just driving on the way from Austin to Santa Fe, and we saw a church van next to us. Caroline wondered aloud if maybe it was a band that had rented the church van, and we waved at them. Sure enough, a couple of minutes later, she got a phone call from her friend Sam: “Am I on acid, or are you driving next to a church van right now?” The van was not only holding a band, but a band of Caroline’s buds. That was pretty surreal. We haven’t been on tour long enough yet for the really ridiculous situations to start accumulating. Any day now!

AF: Any past tour escapades?

AF: Where can we catch you on the way back up from SXSW?

AB: Fruit & Flowers is heading to Treefort fest in Boise, Idaho, then doing a run down the west coast.

AF: If Bruce was a musician, what instrument would he play? 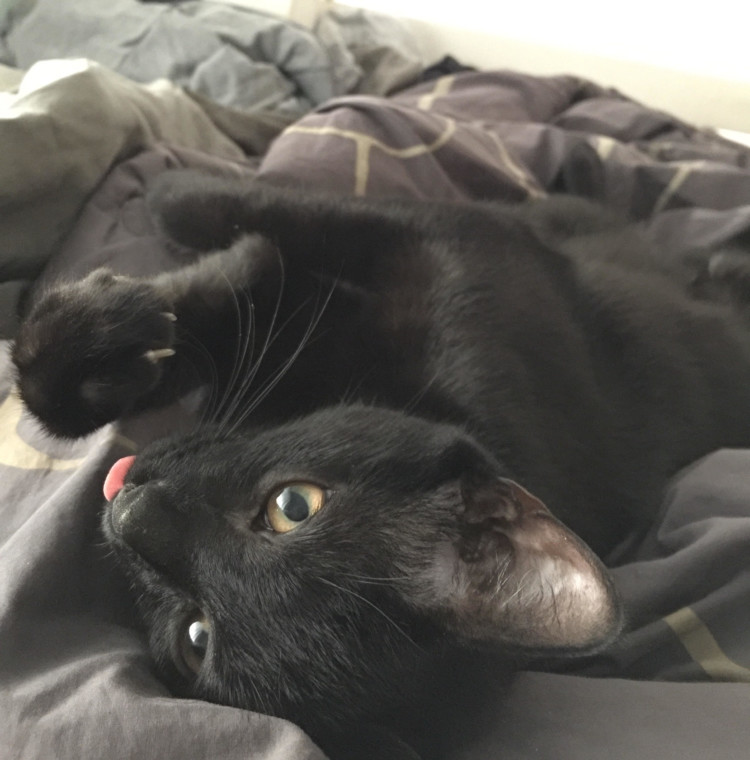 AF: What genre of music do you think Bruce would write? 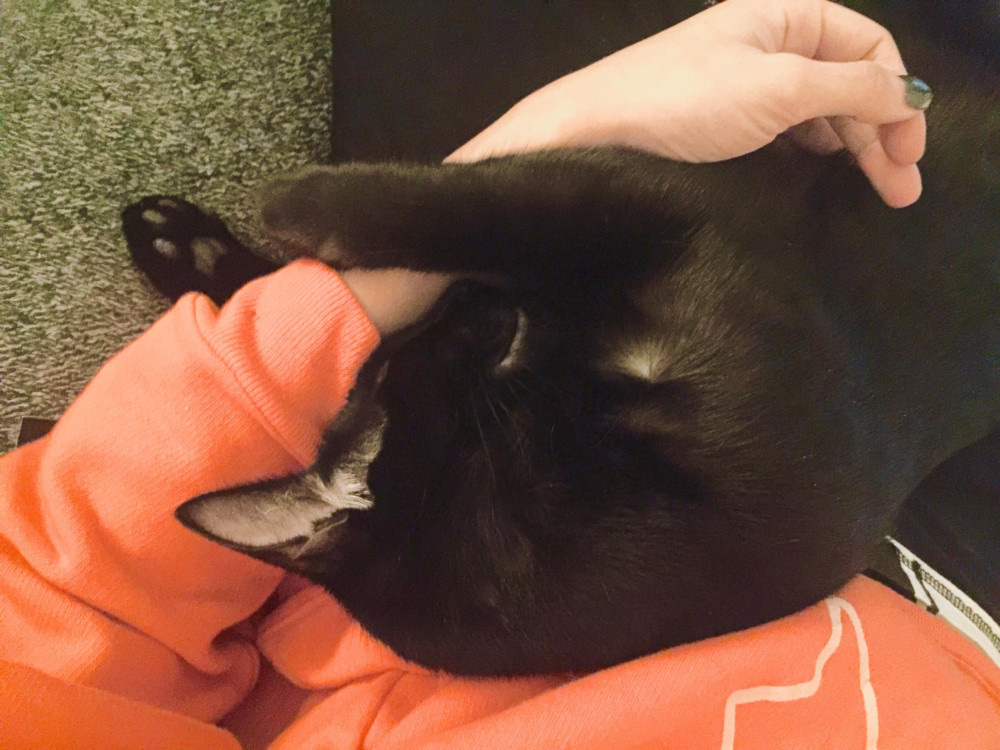 AF: What is your favorite song about (non-human) animals?

AB: “Blackbird,” by The Beatles. It’s usually my general favorite song, regardless of non-human associations.

AF: Have you ever written a song about (non-human) animals?

AB: I wrote a series of songs about Greco-Roman mythology, through the eyes of the women in the myths. Those involved a couple of odd transformations, monsters, and other non-human creatures. I think that’s about as close as I’ve gotten to writing a song about animals.

AF: What do you miss the most about Bruce when you are on tour?

AB: I miss his fuzzy fuzzy cuddly face and his little paws and his expressive meows and his fluffy belly and his sweet head nuzzles and scratchy kitty kisses and the way he hugs your hand if you pet him while he’s sleepy. When Tim or I are home he is like our shadow, always following us from room to room, next to us or under our feet. I miss that special Brucey brand of loving companionship. 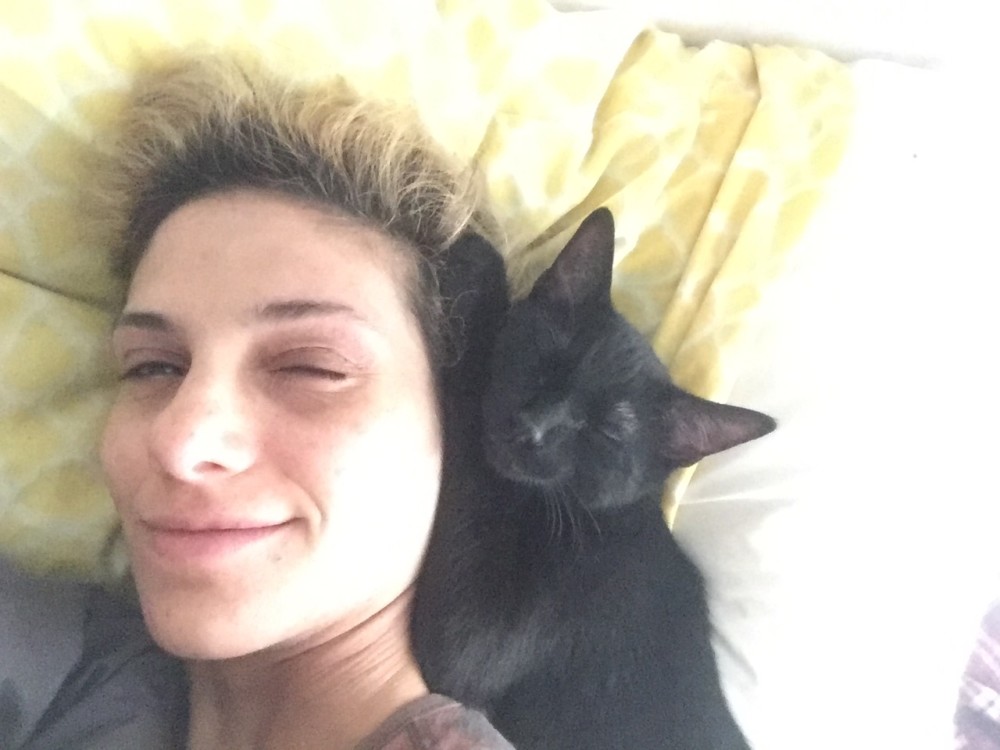 AF: Does he have any favorite foods?

AB: Bruce’s favorite food is whatever Tim or I happen to be eating at any given moment. 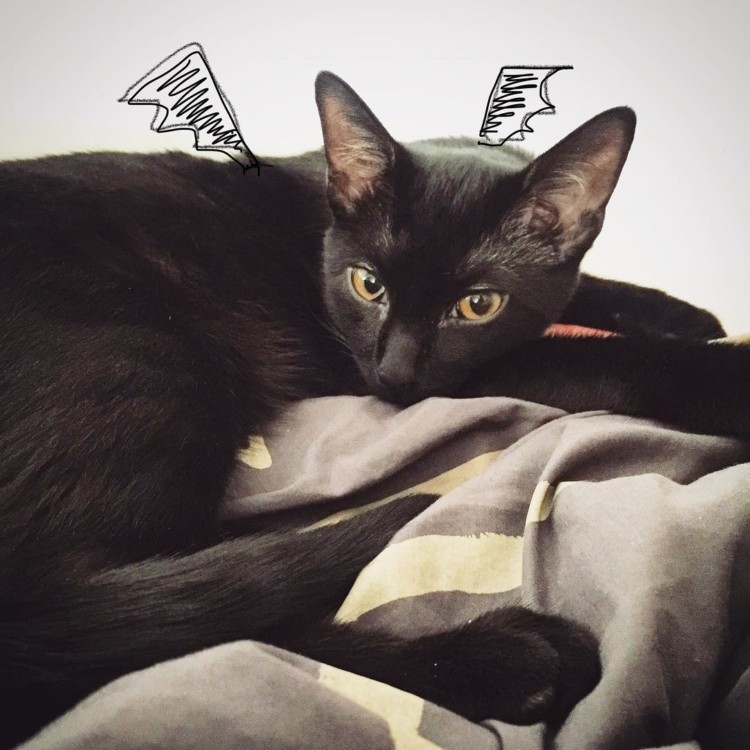 AF: What is on the horizon for CATTY and Fruit & Flowers when you return from tour?

AB: Fruit & Flowers’ homecoming show is on 4/10 at Our Wicked Lady, with Veronica Bianqui and Miranda & the Beat. Catty is playing Sharkmuffin’s EP release show on 4/5 at Alphaville, with Gustaf and Haybaby, and we can’t wait! 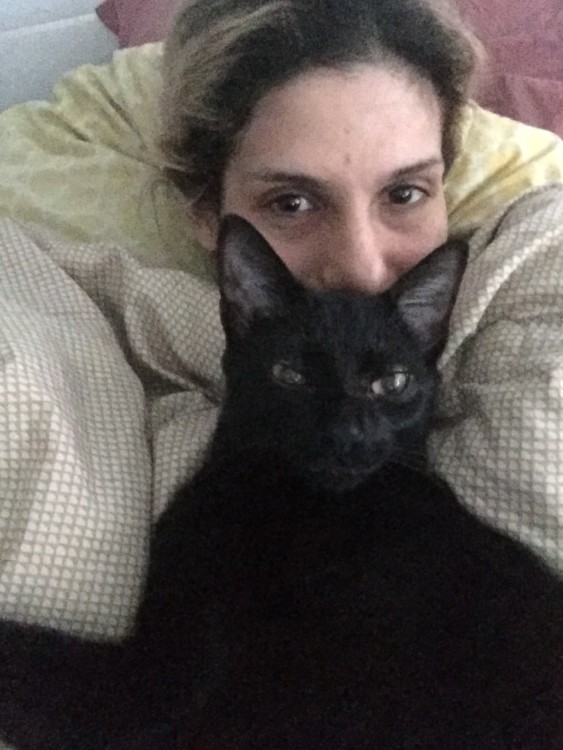