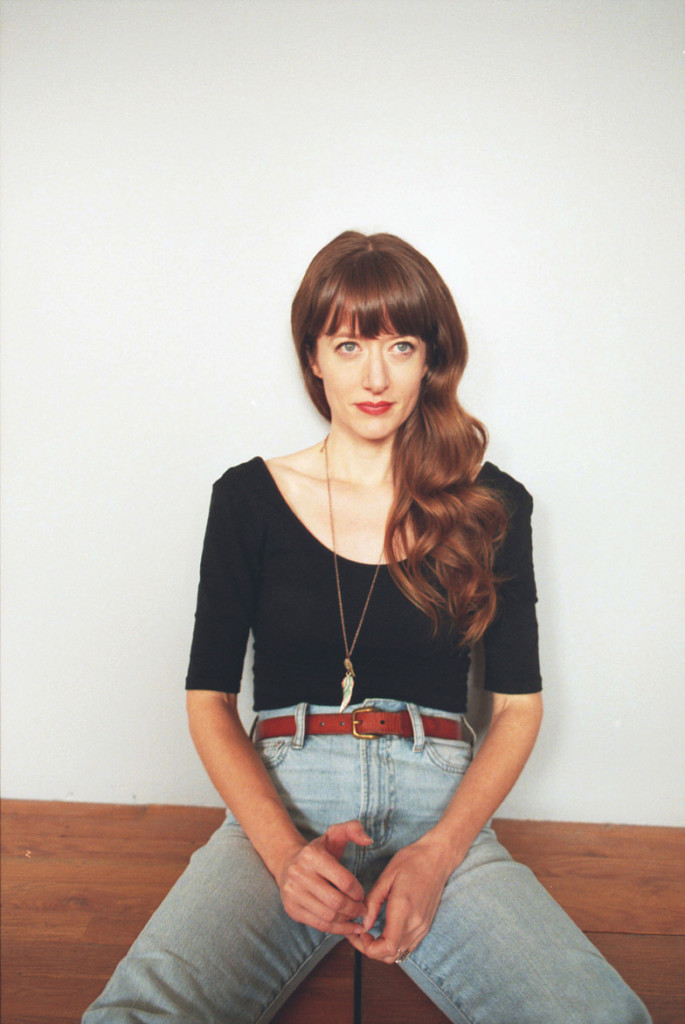 Atlanta-via-Brooklyn’s singer-songwriter Victoria Blade is one of my favorite discoveries of the year. Blending classically trained vocals with a carefree, indie-pop vibe, sweet melodies, and lyricism that makes her songs feel more like a journal entry than a track meant to be shared with the world, Blade has an effortless way of captivating her audience, whether on tape, on the stage, or on TV (or wherever you binge your favorite shows).

After covering her intimate debut LP, Lo-Fi Love Songs, I was thrilled to check back in with Victoria and share the story behind her newest music video, “Moving Song.”

AF: I’m so happy to have you back in the column, this time with the music video for “Moving Song.” The music video feels so much like a home video; what made you decide to take it in such an intimate, homey direction? Did you reference any old home videos before shooting? How did you film it?

VB: I wanted to capture the lo-fi, intimate vibe of the album, which was recorded straight to cassette tape and recorded in my apartment in Brooklyn and Atlanta. It felt like an old camcorder would be the perfect way to capture a soft, nostalgic look. My friends at Brand Red studios took the idea and ran with it. My director Ryan Simmons captured the perfect “Dad holding a camcorder” style with awkward zooms a plenty. We wanted to tell the story of me moving to Atlanta, exploring the beautiful city and making it home.

AF: You’ve been in Atlanta for a little over a year now; have you settled in and made yourself at home yet, or does it feel like another stop on the way to a brand new place?

VB: Atlanta is an unexpected gift. It does feel like home although I’m still not used to the heat! It is hard starting over. I honestly feel a little exhausted from the energy it takes. I love Atlanta and it feels like the perfect home right now. I’ve learned to stay really flexible when it comes to my expectations of life and the future. I didn’t know when I wrote “Moving Song” that it was going to become a bit of an anthem for my life, constantly exploring new places, people and skills. But right now I’m here and I’m all in.

AF: You and your husband have lived all over the US in just a few short years. Do you think the concept of “home” is more of a place at this point, or a feeling? What is “home” to you?

VB: Home to me is being with my husband and building our lives together. I think I’ve come to expect a lifestyle of adventure. I really crave being out of my comfort zone. When I start to get comfortable, I get a little bored. I love doing new things. Going to places I’ve never been and seeing the world from a different perspective makes me come alive.

AF: Can you talk a bit about what inspired “Moving Song”? The idea of picking up and moving your entire life is so overwhelming (at least it is to me!), but the song feels very laid-back and relaxed. Was that your overall feeling when you were moving (and writing the song), or was it something you could look back on and see how everything fell into place?

VB: I love that you picked up on that contrast. The song is so chill and moving is so NOT! I love “Moving Song” because it perfectly sums up my excitement and fatigue from this surprising, ever-changing journey I’ve been on for the last 10 years as a working actor and musician. But I wasn’t intentionally thinking of any of that while writing it; it just came out organically.

AF: Let’s talk a bit about the DIY nature of not only the music video but your record, and the record label you and your husband run, Already Dead Tapes. Everything you do feels so intimate, like it’s a tiny bit of you put on tape or film and shared with the world. Do you think your DIY mindset and the involvement it requires creates that intimacy? Do you ever wish you could take a step back from it?

VB: That’s a great question! Yes, the intimacy comes from the DIY nature of our label, Already Dead, and our lifestyle in general. I really do believe it’s usually best to figure out how to do things for your self. However, that effort and constant vulnerability can be exhausting. My goal would be to have an ever-expanding team of people to help with things like PR, booking, recording, producing etc. So the creative side can be where I spend most of my focus. I also just really need a vacation. Ha!

AF: Where do you look for inspiration when it comes to not only writing your music, but shooting music videos and running a company?

VB: I love that question. I find inspiration in collaborating with others. It’s really fun to organize with great creative people and make something out of nothing. When I have a clear vision for a project, that inspires to me to see it realized. I also have started setting goals and deadlines for creative projects and that inspires me to keep them! I really admire people who just do the hard work of getting their ideas out and sharing their creative vision with the world consistently. That takes so much intentional work and focus but the process can be so rewarding. I think I come alive when I’m really focused on a big project that requires a lot of problem solving.

AF: Last one! What’s coming next? You’ve got a beautiful record and a sweetly nostalgic music video; will there be any tour dates?

VB:I’m playing Monday Sept 2nd at Mother Bar in ATL! I would love to plan a Southeast tour for later this year. I have been busy shooting on different TV shows as an actor and I’m constantly auditioning, so that has been my focus for the last few months, but I plan to get some more show dates in the books soon! I also have a bunch of songs ready for a second album I will record next year!