I’m surprised when Jordyn Blakely greets me on Manhattan Ave, all seaweed hair, smudgy make-up, black faux-fur coat and a cheerful open-faced expression that should counteract her hipness. Barely an hour ago I watched her get shampooed in Stove’s “Blank” video with a stoic gaze and a steady, melancholy intonation. Before that I Spotified (that’s a word, right?) Jackal Onasis’ 2016 LP Big Deal Party, with her apathetic clear-as-a-bell vocals underlaying the foreboding guitars on the title track. I feel unworthy around the drummer behind the beats of these bands— and the most recent iteration of Kino Kimino—yet I felt instantaneously at ease with that face.

Make no mistake, Jordyn Blakely is so cool (as I say about 500 times), but such an affable quality should be mutually exclusive with coolness. Historically coolness within the scene is best matched up with aloofness, and friendliness—at least in the most cynical lens—frequently feels like a half-hearted method to get someone to attend your gig at Sunnyvale next Thursday.

I’m eager to figure out how she manages to be both these things, and doubly eager to grab bagels at Frankel’s with her.

The Scene: Jordyn’s only stipulation with breakfast was that she needed a Starbucks coffee beforehand, unable to function before being properly caffeinated. Otherwise she was open to meet me anywhere off the Nassau G, because she is v v chill.

I am v v not chill. Flashback to me dragging our mutual friend down the street the night before, asking frantically, “WHICH PLACE SEEMS THE MOST JORDYN?”

Luckily she thinks Frankel’s is cute, but like anyone who’s tiptoed into Greenpoint, has a special fondness of Peter Pan’s Donuts. I promise we’ll swing by after our pumpernickel (her) and everything (me) bagels and cream cheese. 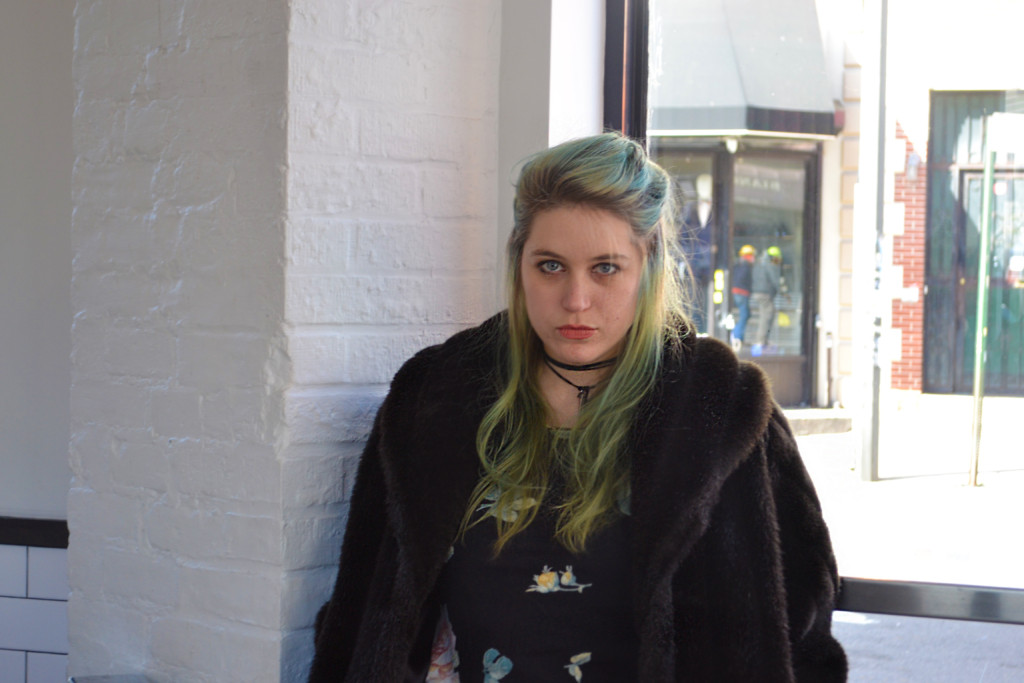 11:13 A.M. As she artistically tears apart her breakfast, Jordyn talks about how she’s doing more writing recently.  “I don’t think [fusion_builder_container hundred_percent=”yes” overflow=”visible”][fusion_builder_row][fusion_builder_column type=”1_1″ background_position=”left top” background_color=”” border_size=”” border_color=”” border_style=”solid” spacing=”yes” background_image=”” background_repeat=”no-repeat” padding=”” margin_top=”0px” margin_bottom=”0px” class=”” id=”” animation_type=”” animation_speed=”0.3″ animation_direction=”left” hide_on_mobile=”no” center_content=”no” min_height=”none”][Stove frontman Steve Hartlett] wants it to be just a solo thing, I think he wants it to be collaborative.” She’s been musician-ing for a decade, but the singing, the contributing, it’s fairly new and so refreshing to be more than a drummer.

Mouth full of bagel (so sexy), I stammer, “You wanna be…it’s almost…you’re behind the kit but want to be in front of it,” before realizing that’s logistically impossible and rephrasing. “You want to have your voice heard.”

She does, and her Stove and Jackal Onasis band mates have been nothing but supportive of this, something so important for bandmates, and especially male bandmates. But they’ve never made her feel like she’s “the girl in the band,” she says. They’re an inclusive bunch, and she’s excited for this sort of Broken Social Scene chapter of her life.

11:23 Jordyn’s trying to explain the new changes in the band beer-drinking/song-writing sessions, and as a professional music journalist I’m really interested in what kind of beer. “Usually whatever we can get, we usually drink a lot of Labatt Blue,” she explains, although she’ll also do Coors Light, Brooklyn Lager if we’re getting fancy.  I figure we should take some pictures, and she starts fidgeting her hair, even though she looks like The Little Grunge Mermaid.

“Have you ever heard of Sea Punk?” She says, then explain it’s sort of a nostalgia thing. “About the days of sea-faring…?” I interrupt. No, no no, more of a Vaporwave-y nostalgia thing using electronic beats and aquatic iconography, Windows 95 meets Sea World. “Amazing,” I think, trying to untangle her hair with my hand so it falls properly. 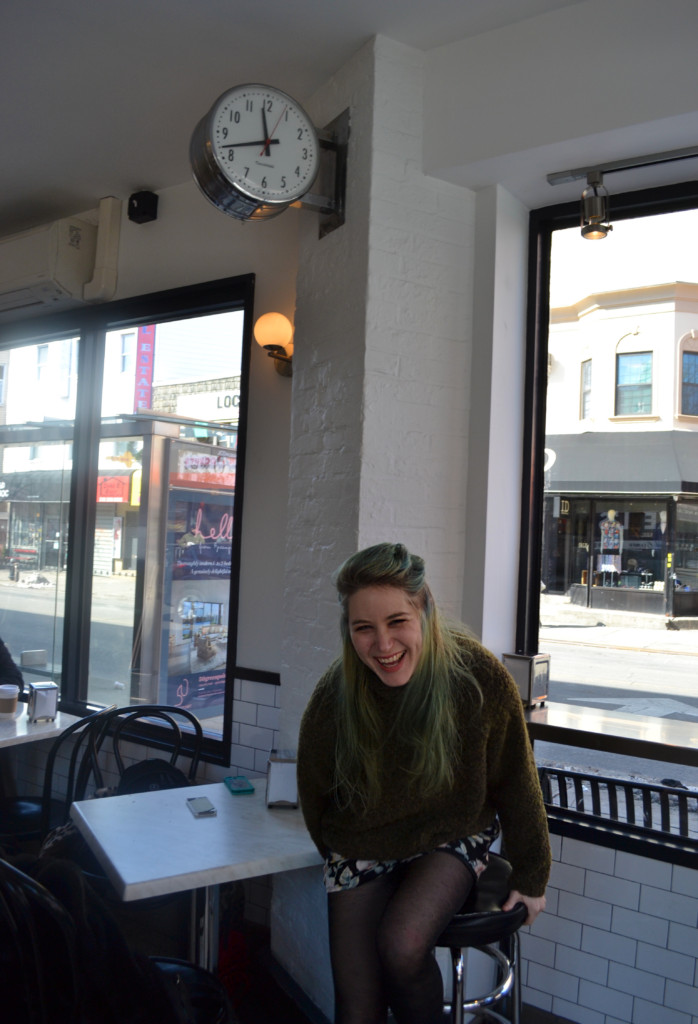 After our mini-photoshoot, we get back to. “It’s weird because I feel like any artistic thing you pursue is selfish,” She says. “Like you have to think about yourself and what you’re feeling and what you want and figure out a way to present that in a way that’s like, satisfying to you emotionally but also sounds good to someone else.”

That and the whole being-able-to-make-money thing, but it’s a far lesser concern than creating meaningful work.

11:34 Out of nowhere Jordyn asks who my favorite journalists are, and I’m stunned that anyone would care, but okay, I’ll bite. I divulge my fascination with Cat Marnell and mention my career trajectory is essentially inspired by Pamela Des Barres’ I’m With The Band, has she ever read it?

She wants to, and I say I’d lend her my copy but last time it became a Whole Thing. Then I instantly change my mind and say she can borrow it if she doesn’t break-up with me later. She promises she won’t, which is sweet.

11:53 As I’m crumpling my bagel wrapper, our discussion turns back to songwriting, specifically the in musicians-on-musicians vein. “I’ll just tell you the secret,” Jordyn starts, and I am all ears because I love secrets.

This raises my eyebrows and I’m quick to supply that a lot of writers do the opposite, that they try to construct a Swiftian diatribe about being a victim and scorn those who ripped out their heart (see: my entire career). Instead, she’s using empathy to tackle songwriting from a more objective perspective, which makes her a fairer musician, probably better journalist than me, and at the very least, not a dick.

…it’s approximately here when I decide we need donuts immediately, because things are getting real heavy before noon. 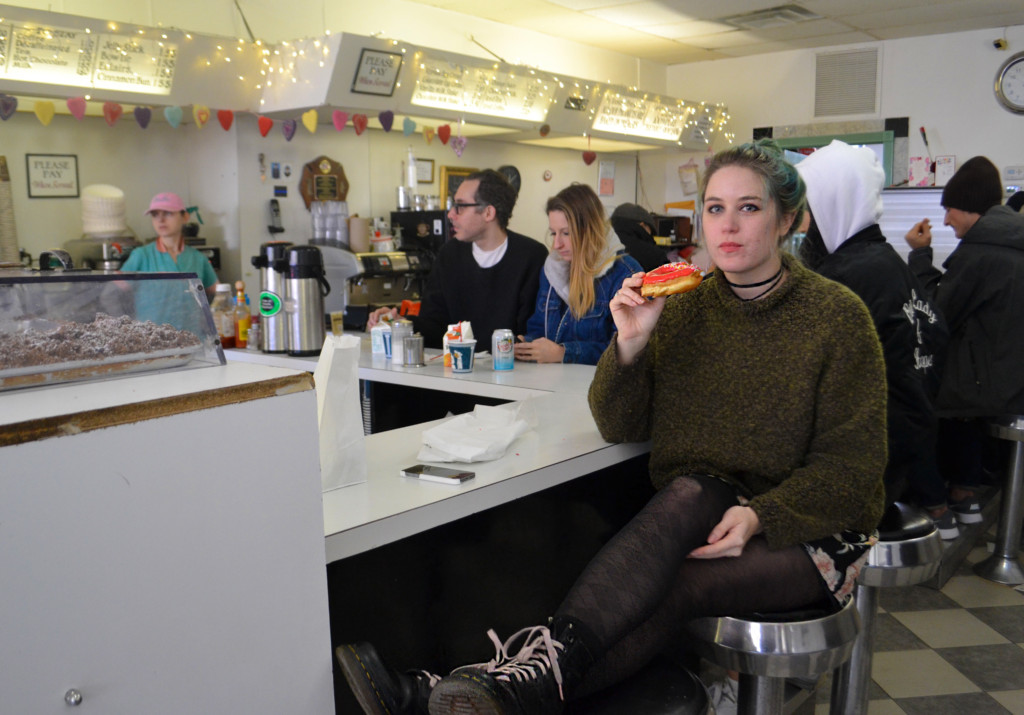 12:10 I finally found someone else who was ruined in a permanent in-your-mid-20s-cannot-sleep-without-a-light-on way by The Ring. “I was sleeping in my mom’s bed for a week, and she was like, ‘You need to stop, you’re 13, go away,'” Jordyn says, a classic Homer Simpson donut in her hand. Our conversation has segwayed from our obsessions with heart-shaped glasses, to the plot of Lolita, to things that horrify. The Ring is up there for us both. followed hard by The Grudge, and though she very rarely gets scared, she has a shortlist.

On it: creepy sounds, anything moving slowly, deformed faces, and Jaws which she only watched recently (“it is so good, so effectively scary.”) And then there are things realer than Japanese ghosts and animatronic sharks, like night terrors, car accidents, and being mugged. She was roughed up by a mugging during her Berklee days, an eye-opening experience that confirmed she wasn’t in the safe haven of the suburbs.

“And that was the first time I realized ‘oh, other people will hurt you.'”

12:39  Jordyn’s heading to Alex’s place for their next songwriting session, and in a perfect New York twist he lives right on my street. So she knows about 4 am McGolrick Park confrontations and that one Polish bakery that’s really, really mean. Before we actually cross said bakery she notices a whole cigarette in the street, and there’s a very real moment where we debate saving it before I deduce it’s probably fine if we’re “one less cigarette closer to death.”

We stop at my my apartment and after I give her the grand tour I hand over I’m With The Band, reiterating that it should give her a window on what it’s like for non-musicians in the scene. She’s excited because she’s always wondered about that, whether we get sick of hanging out with musicians.

I never get sick of it, although after she leaves, I still feel perplexed; from best friends to bedfellows, nobody in the scene has ever bothered to ask me who my favorite journalists are before today.

It’s then that I think I’ve figured out Jordyn, and what will undoubtedly make her a good songwriter. Her musicianship and aesthetics (again, v mermaid grunge) are a killer mix for a drummer babe, there’s no question. But once she gets up from the drum kit there is no bullshit rock star pretense, just absolute candidness peppered the occasional adorable observation (i.e. “Not to be a dick, but Wayne’s World 2 is not that cool,” which had me dying).

She instantly embraces you, connects with you, tries to understand you and include you. She’ll tell you her fears, admit to her self-consciousness, and share secrets with you as effortlessly as sharing a beer, a bagel, a cigarette.