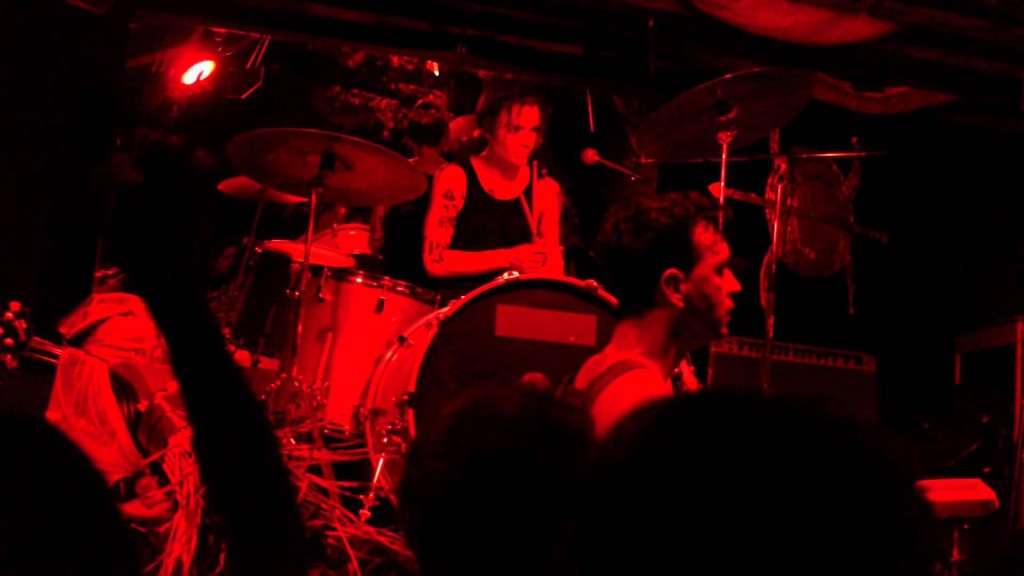 A friend of mine has been nagging me to see Not Blood Paint almost every week for the past two months.  She lured me in with stories of their famously dramatic shows and musical dexterity.  Apparently its members have a background in theater and performance, which was nothing less than obvious the night of their show at Shea Stadium last week.  The foursome mounted the stage in greenish-gold face paint, leggings, and spray-painted tunics. Their look fell somewhere between Spinal Tap and cheap costumes for people dressing as “Satan Worshippers.”  I was skeptical of this display immediately.

Oh, here we go, some theater kids.  Just like the ones in high school who greeted every morning with a star jump and vocal exercises.  Great…  I watched with a raised eyebrow for the first few songs, confused about my feelings over what was transpiring on stage, and then I realized something: they’re fucking incredible musicians.

Truly, every single one of them is a master of their instrument.  I would be fawning over the guitar licks until I noticed the precision of the drum parts, and eventually I’d stumble all over the bass riffs.  On top of that, they can do perfect barbershop quartet style harmonies, and stretch their vocal range to that of Steve Perry.

I had heard a handful of their tracks prior but could never pinpoint their style.  Every song I listened to sounded different from the last, yet all sounded familiar at the same time.  I say this because Not Blood Paint is not a genre-defining band.  Their musical roots clearly lie in early metal, glam rock, prog rock and jazz.  Yet what they lack in innovation they make up for in pure craft, passion, and sense of humor.  Some of their live performance stunts can get a little gimmicky, but they’re the kind of guys who just like having fun and don’t give a shit what pesky writers like me say, so more power to ‘em.  They certainly know what they’re doing and I’d love to see them again.

The headlining band, Bad Credit No Credit fell under a similar category as Not Blood Paint. While the music itself was different from their predecessors’–they played their own brand of ‘90s revival ska, punk, and jazz–their set was no less theatrical, and gimmicky.  And again, despite the Christmas costumes and backup dancers, Bad Credit No Credit are a pack of damn fine musicians.  I could listen to the horn section alone and be happy.  Throw in Carrie-Ann Murphy’s Sax ‘blowin and phenomenal vocals (she must be operatically trained) and you have a pretty impressive bunch.

It was a fun show regardless of any nitpicking I’ve committed.  The crowd was dancing hard, and everyone was happy.

Just as a last nod to the overwhelming talent of Not Blood Paint, here’s a round of applause for their diversity as musicians.  Check out the difference between this:

Pretty damn impressive if you ask me.