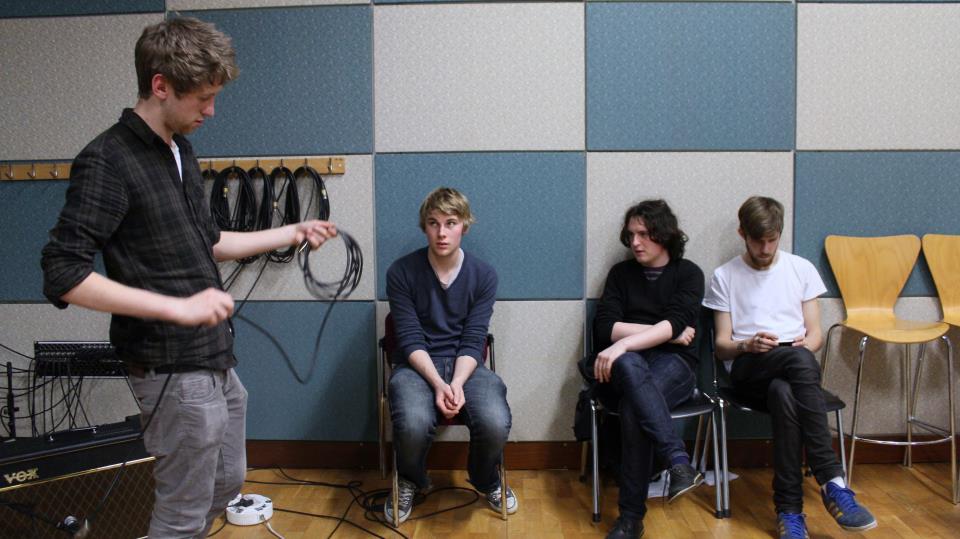 It’s been a year since I last saw Girl Band, and I’m a bit more prepared this time around.

Purse-less. That’s the big one. After getting caught in a swirl of flailing bodies at their last New York gig, I’ve consolidated my belongings into a jacket instead.

Advil. An appetizer amount of rage – just enough for dancing.

It’s not a daily anger I’m bringing to Saint Vitus, but a squirrel’s store of frustration easily disposed of after one of Girl Band’s sets. But that catharsis is contingent on one thing: will there be jumping? As the Irish four-piece crash into their first song, I am not so sure. The sold-out crowd is motionless, justifying the worst of New York audience clichés. Even Girl Band seemed on the “mellow” side, whatever that means for an a-melodic noise group. Had I prepared too much? Was I holding an umbrella on a dry day? I felt a bit stupid, sweating in a heavy, overfilled jacket while other women wore lightweight shirts and clutched purses, visibly more comfortable than I.

One, three, five songs passed. Lead singer Dara Kiley guzzled water as the representative Irish audience members heckled lovingly, shouting highly original material such as “IRELAND!” and “Come on IRELAND!” I was beginning to worry I’d suited up for nothing, and that my little supply of ferocity would dissolve into its truer state: hangriness.

What I’d forgotten about is Girl Band’s ability to leverage potential energy throughout their sets. Despite their untethered sound, Girl Band are not chaotic. They approach their performances with surgical precision, exuding more focus than blind fury. Like EDM mega DJs, they conduct the pulse of the room with each song – knowing exactly when to break it down, stretch a measure, and drop the beat like an anvil from 12 stories up. I suddenly remember this as the band break into a patch of new songs, which are structured far more like deep jungle techno cuts than noise punk thrashers. One is purely instrumental; with a driving drum rhythm that demands movement. Bassist Daniel Fox and guitarist Alan Duggan practice maximum restraint as they advance and recede in volume – something that whips us into a bit of a state. We are dancing. It is not enough, but it is all part of the plan.

Anticipation. Swans have volume; The Flaming Lips have props; Girl Band has anticipation. Feeding off the frenzy of a crowd primed for a unanimous tantrum, they know precisely when to strike with the big guns. So when they burst into “Pears For Lunch” off of 2015’s Holding Hands With Jamie, the vibrating build-up of tension bursts into kinetic energy. The jumping and shoving ensues.

If Girl Band were once taken to task for not actually being girls, then their use of the word “band” might also be questionable. If a band plays songs on instruments, what does Girl Band play? Are their records made of songs? Or riots? Are they playing their instruments? Or assaulting them? Arguably only drummer Adam Faulkner is approaching his instrument in a “traditional” way, while Duggan and Fox manipulate theirs; Fox making a slide guitar of his bass with a beer bottle, and Duggan beating his guitar like a drum. Even Kiley would be ill-described as a “singer,” as he often utilizes his serrated scream rhythmically. I can’t help but notice this calculated nature of theirs on stage; it has become all the more apparent now that the crowd has burst into unruly motion.

The last three songs are blood-boilers; we are fiendishly pleased when Faulkner strikes the opening beat to “Lawman.” By now I am steeped in sweat, attempting to regulate my breath between verses like a swimmer I saw on TV one time. I’m probably doing it wrong. After a stabbing six minutes of “Lawman,” Girl Band launch into “Paul,” and my suspicion that they were saving the most incendiary tracks for last is confirmed.

Perhaps Girl Band have mastered a kind of regimented wrath; micro-dosing with madness. Their work is an example of what anger can achieve when it is sharpened to a fine, sparkling point. Freud called it sublimation, but for Girl Band it is merely the creative process. As they arrive at their final song, Kiley thanks the crowd. The quartet rip into “The Cha Cha Cha” – a 29-second, distorted shout storm. A bite-sized bit of rage.