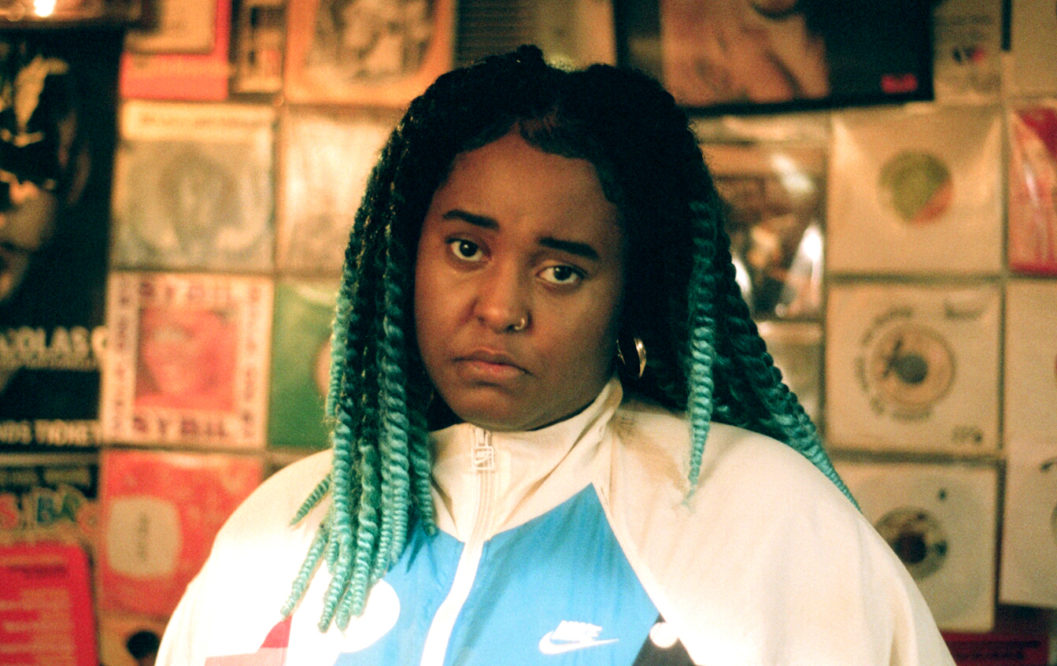 Listening to MEDIUMN, the debut EP by UK trio GRAMN., it’s hard to imagine a time when 27 year-old vocalist Evan Williams, who goes by Aux, didn’t think of herself as a singer. After auditioning for the British Academy of New Music on a whim, she began working with soul duo Equals as an “honorary member” – but that, too, proved serendipitous, as Equals producer James Low tapped her to provide vocals for the grimy, heavy beats he’d been making on the side. He also brought multi-instrumentalist Johnny Tomlinson into the project, and the trio began creating an experimental, electro-infused alternative R&B tracks, quickly realising that the music was simply too good to leave in the studio. Dubbing their project GRAMN (pronounced like “damn”), they released their first singles, “Write it Down” and “Freak Out,” in 2019.

While the foot-tapping “Write it Down” was a fitting introduction to showcase Aux’s vocal range, the running thread in “Freak Out” is a funk-inspired guitar riff that ties the whole track together as more elements weave in and out of the chords. But the release of “Mini Milk” in July, at a time when the world was seeing protests against police brutality and conversations around white fragility had been renewed, proved to be the band’s biggest statement to date. Named for the mini milk ice cream lolly, a popular summer treat in the UK, the song takes to task so-called white allies whose performative wokeness felt tiring to Aux – through the vector of an alt-R&B bop.

“A mini milk is someone who is frozen by guilt,” Aux explains. “My issue is with the dismissiveness of it all – when people say ‘Well you know, I didn’t shoot you’ or ‘It wasn’t me.’ ‘Mini Milk’ is basically like ‘stop chatting shit’ unless you want to have an educated and intelligent conversation about how we’re going to solve this problem. Stop being guilty… no one is accusing you of anything… if you feel that way then that’s a you problem.” Noting the scenario of people posting a black square on Instagram for #BlackOutTuesday being an example of limited, meaningless “support,” Aux uses “Mini Milk” to highlight similar contradictions she’s seen within the Black Lives Matter movement, repeating the phrase “ain’t enough” throughout the track. “It’s crazy that we have to split hairs between non-racist and anti-racist at this point because otherwise people just don’t get it,” she says.

Like Reni Eddo-Lodge’s landmark text Why I’m No Longer Talking to White People About Race, “Mini Milk” captures a particular frustration that exists on top of more overt forms of racism that still persist in the UK, like other nations with colonial roots. There’s a growing perception that the racism in the British Isles is to a lesser degree than what people see in the United States; other than being false, this creates a dangerous precedent in which those in power allow systematic racism to fester rather than working to eradicate it. “We’re 4% of the population but we still have the highest incarceration rate. Black women are five times more likely to die during childbirth. You are 40 times more likely to be stopped by the police as a black man,” Aux points out. She urges would-be allies to educate themselves on the real issues before making empty gestures; a song like “Mini Milk” is a perfect catalyst to snap people out of complacency.

Though “Mini Milk” feels especially relevant in this moment, all of the songs on MEDIUMN accomplish this to some degree, bursting with infectious production that makes heavier subject matter more palatable. The EP compiles the group’s previous singles alongside relaxed and atmospheric album opener “Howl,” the dreamlike “Coaster Boy,” and EP closer “Better Places,” a dark, soulful track that communicates the pain of domestic violence against the backdrop of an ethereal soundscape. The collection of work serves as confirmation of the trio’s undeniable talent, one that will only continue to evolve. It’s also a sonic exploration of Aux’s quarter-life experience; the EP’s namesake describes the balancing act she’s had to do as a biracial woman with a history of trauma. “I’ve had a strange existence; some of it’s been great and some of it has not. I think the only way I function is either really really happy or really really sad, so I have to find this semi-apathetic medium,” she explains. “I think maybe it started as a survival instinct – I just became medium.”

Though it began as Low’s side project, GRAMN. is now entirely collaborative – and they have more music on the way later this year. “Sometimes things happen so organically and a song forms like a baby. But then sometimes you’re mining for the rarest stone!” Aux says of the trio’s songwriting process. “It’s like Jenga trying to pull songs out of your brain – sometimes you can just find it and sometimes you cannot, and sometimes you pull them out and you’re like, ‘Just go back in there!’” But with a critical eye and clever wordplay, Aux reveals just how much she cares about the message she and GRAMN. bring to their audience.