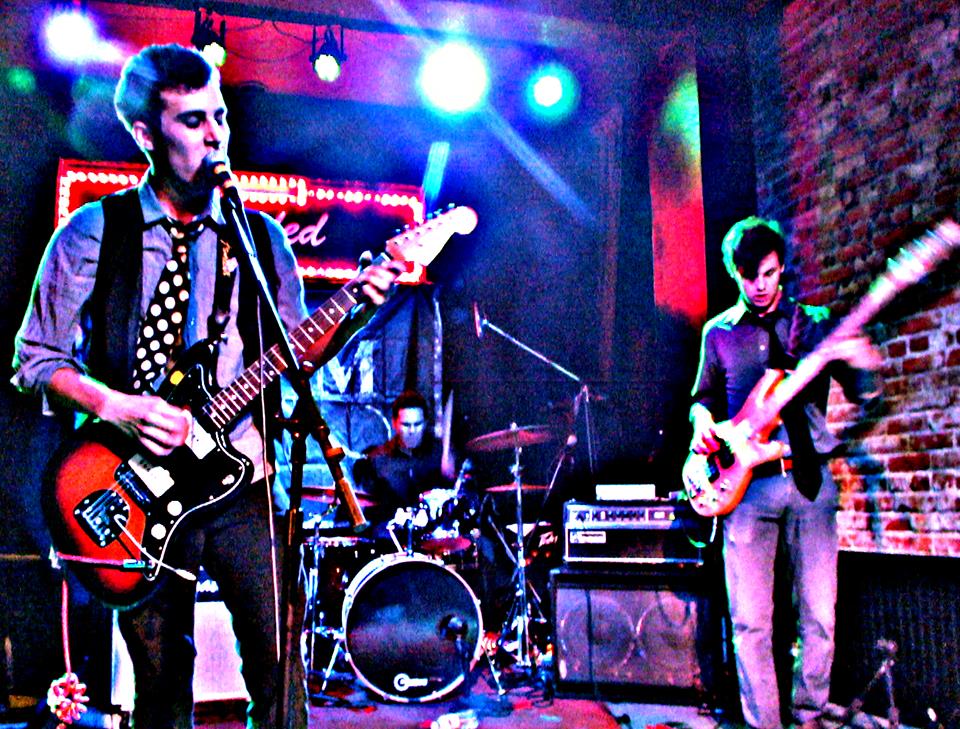 I wasn’t sure what to expect as I drove to a random address in North Hollywood two weeks ago. I had been invited to witness the birth of a band, but I didn’t know the genre or the members. I wandered to the back of a lockout that was stacked to the ceiling with amps, instruments and boxes packed with who knows what. Ethan Goodman, Schuyler Neilson and German Perez were rehearsing for their first show together, ever. Ethan’s irreverent lyrics and languid guitar strokes, Schuyler’s varied bass strumming and German’s crazy drum beats form the basis for Cheer Up Club, and though they have been playing together for less than three months, they jam like a seasoned band. After Ethan flipped his Beatles shirt inside out (the rehearsal was being filmed) they started to play; I was hooked.

Schuyler (pronounced Sky-ler, he’s Dutch) and Ethan met when they were touring in Europe with other bands. Schuyler was on tour with Poeina Suddarth and Ethan was playing solo as support. It was December 2013 and throughout the tour Ethan slowly pulled Schuyler in, making his solo act a duo after a large bottle of Jameson and a long morning of recovery. Ethan assisted in Schuyler moving down to Los Angeles from Portland by finding him a place to live and a job. After he settled in they started their search for the perfect drummer to round out the trio. Though they nearly lost hope after a succession of bad auditions, German appeared. He was a self-taught percussionist that knew exactly what to play, when to play it and had his own flair to boot.

They were all raised surrounded by music. Ethan had so many great records played for him as a child that he was surprised when he discovered terrible music existed. He used to listen to Led Zeppelin, the Beatles, David Bowie and classical tunes to pick out the different instruments and note how they were used in the songs. German was raised around his father’s musician friends, and taught himself the drums with help from of a friend and daily practice. Some of the earliest music he remembers hearing includes Prince and The Revolution and Madonna. Schuyler was five years old when he plunked out a Blondie song on the piano from memory that, according to him, just happened to be in the right key. Schuyler jammed to Outkast, Weezer and Zappa in his youth.

After eating some delicious pizza and watching Cheer Up Club jam for a few hours I was ready and anxious for their show last Wednesday. The day finally arrived and the audience was full of fellow musicians, family, friends and curious bar-goers. As they walked on stage they did not telegraph nervousness, just pure excitement.

Ethan introduced the band casually, his snarkiness much more dialed down than in rehearsal. The boys wore ties, loosened gradually throughout the show as audience members started to dance. They all have wonderful stage energy and, even though I could only see German by looking at the mirror on the wall, they were all deeply engaged in the tunes. Once comfortable on stage, Ethan’s sass fully came out. “You guys got feet? How long ago did they get cut off?” he teased the audience, though the music itself was certainly enough to make people get up and move.

Ethan’s cheeky attitude, Schuyler’s versatility and German’s exuberance blend to create an entertaining, smart show with a punk edge. Ethan’s lyrics touch on topics ranging from motorcycle crashes to fad obsession to aliens in museums. The brilliance in Cheer Up Club is in their uniqueness. All three members are great people and the stage energy reflects it. But the real joy of the show comes from that wry intelligent stage presence backed by pounding drums and very clever bass playing. Their next show is at The Good Hurt in Venice on July 31. Watch for them, hear them, see them.