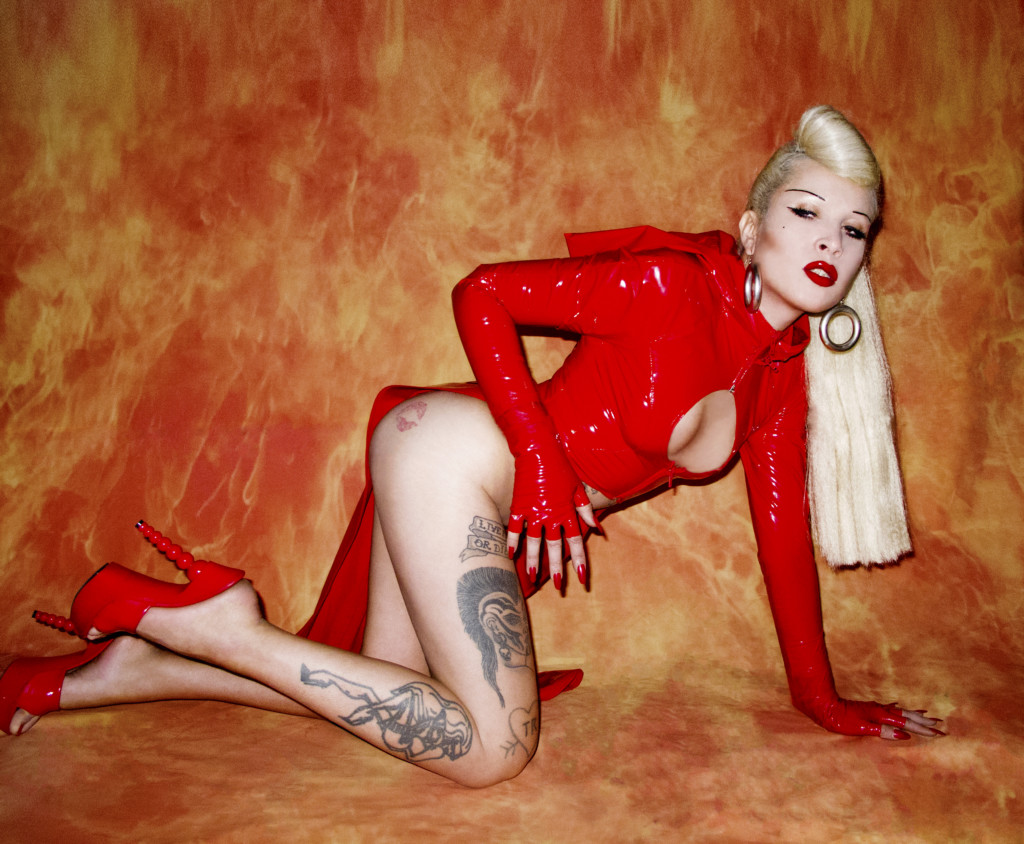 Sporting an ecstatic mane of blond curls and heart-shaped sunglasses, it’s easy to mistake Neon Music for a living Barbie Doll and not the trans Lil’ Kim. She’s five-foot-four-inches of teased-out Hollywood glamour that stares down the blond bombshell archetype, then dropkicks it. But rhymes come just as effortlessly as fierce-femme style to this up-and-coming artist.

Neon’s vicious-glam stage presence has made her a staple of the underground disco scene, but she’s always loved pushing the boundaries of genre as much as gender. Her experiments began as a middle-schooler in Boston, when she would make what she called “one-twink recordings” in her bedroom with a microphone, guitar, and beat machine. In high school, she was in a band that toured with acts such as the Mighty Mighty Bosstones and H20. For two decades, she’s borrowed from influences as diverse as ’70s punk, ’80s industrial, and ’90s rap.

Now the East Coast native is making beats in LA. In her latest project, she steps out as Mz. Neon, a nimble-tongued rapper who’s grabbing the mic to confront ideas about her body, her sexuality, and her experiences as a trans woman. On Friday, March 1, she dropped her first rap track, “Pussy Stick,” a catchy celebration of being a self-described “chick with a dick.”

Audiofemme sat down with Neon to discuss her transition into rap and why she considers Mz. Neon her most honest project to-date.

AF: Your song “Pussy Stick” is very tongue-in-cheek while confronting a lot of taboos about trans women. Can you explain what a “pussy stick” is?

Neon: Maybe people want language that, like, feminizes a penis. I still say “dick” a lot, but a woman’s dick is her own thing. Having a dick does not make you a man. “Pussy stick” was something I heard on this really great show on YouTube called T-Time with the Gurlz. It was like a DIY version of The View with trans women from New York talking about trans issues really unfiltered. They would use that word a lot, and it just stuck with me.

AF: What does it mean to introduce this vernacular to a mainstream audience?

Neon: We keep reinventing trans language. When I moved to New York and was finding my trans community, people still used the word “tranny” like it was no thing. Then time went by, and the word “tranny” became unacceptable. People within the the trans community were divided about it. Like the N-word to Black culture — if that word applies to you, you can use it, but if it doesn’t, you can’t. So “tranny” went in that direction where certain trans women, mostly of a certain age, kept that word going as a thing that you could talk about among yourselves, but it wasn’t okay for people outside your community to use it. That goes into things like “chicks with dicks” or “she-male.” Personally, I always really loved the word “she-male” because it seems exotic. And the word “she-nis” — I think it’s cute. But it’s something I can say and my community can say. If a guy says it to me, then it’s a different thing.

AF: Your song “Pussy Stick” is irreverent and fun, but it also feels like it has an urgency. What made you think now is the time for this track?

Every trans woman identifies in a different way. Trans women are entitled to do whatever makes them most comfortable in their bodies. But when it comes to a chick with a dick, it’s still seen as a fetish-type thing or something that’s supposed to go unspoken. I want to speak to girls that specifically may not know how to feel comfortable with having a dick or feel like having a dick is submitting to some guy’s fantasy. It’s sexy on your terms, not his.

I have no hangups about [my penis]. I really celebrate that about myself. I don’t want to pretend like that’s not a part of me — that’s a very big part of me – no pun intended! I want to get it out there and make it a non-issue. You can be a woman and have a dick.

AF: Rap music is a traditionally Black music form. Many white performers have been called out for using their racial privilege to advance in a genre by and for Black people. Being white, did you have any hesitations about rapping?

Neon: Well, it’s a misconception that I’m white. I’m half Dominican and half French Canadian. But to me, music is music. Rap began as a voice for a marginalized community. Rap, like punk, is very lyrical and very DIY. I listened to a lot of rap music growing up. I know I’m coming into it as an outsider, but I’ve come into a lot of music and a lot of spaces as an outsider.

AF: Does rapping help you express things you haven’t been able to in past projects? In what ways?

Neon: This project is very lyrically different from past projects. Before, lyrics were always the last part, and it would take me a long time to write them because they were so contingent on fitting into a certain melody or something. The themes were more broad and generic. Rapping makes me focus on the written aspects. Now I’m writing lyrics first, and then making a beat around them — or people are sending me beats. The lyrics’ content is a lot more specific. I’m really saying something, not just singing along, and I’m feeling a wide spectrum of emotions while I work. I’m cracking myself up. I’m getting myself horny. I’m making myself terrified. I’m really writing content that’s shocking to me, which makes it exciting because it’s really real.

AF: You’ve mentioned having more songs on the way, though you’re unsure if you’ll release a mixtape or a full-length. What can listeners look forward to when those tracks drop?

Neon: I’m definitely expanding on the themes that I talk about in the opening track. I explore themes of female domination, misogyny, dealing with tranny chasers, being fetishized. I go more hardcore, but I also get more esoteric and spiritual. Where did we come from? Where does gender begin and end? And I give men a taste of their own medicine.