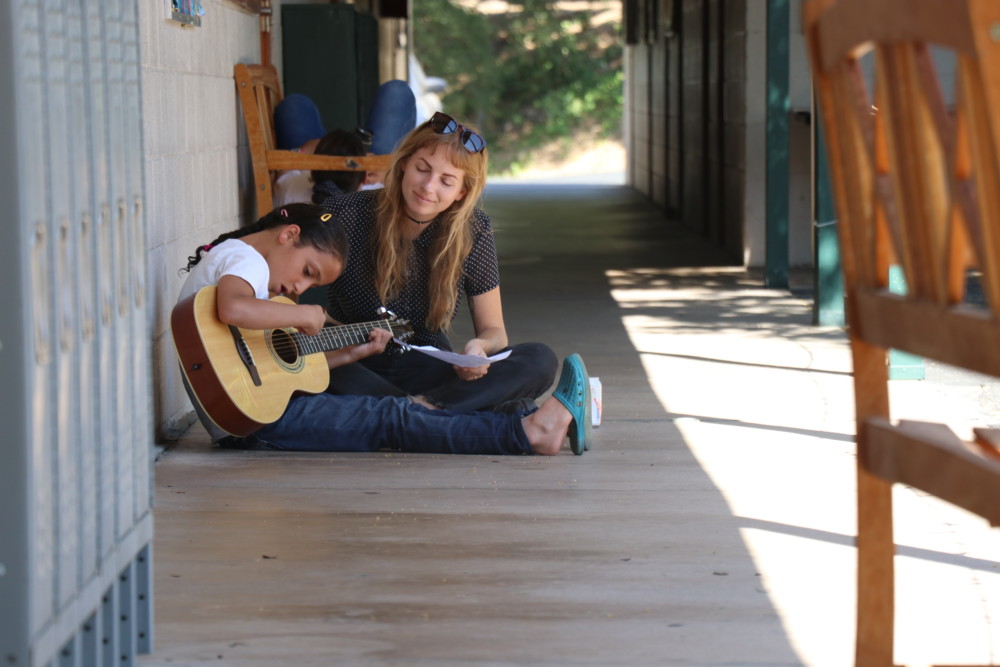 It’s hard for a guy to interrupt you if you’ve got your amp turned up to 11. Many women know the feeling of being mansplained to or interrupted mid-thought with the words “just to piggyback on that.” Girls Rock Santa Barbara is all about getting girls in charge and on stage.

We sat down with Executive Director Jen Baron to talk about how she went from being an environmental science major to heading up an organization that has served over 4,000 girls aged 6–17 in the Santa Barbara area.

AF: Tell us about Girls Rock Santa Barbara. How did you first get involved?

JEN BARON: In 2011, I was finishing up my BA at Antioch University, single parenting and as a final project for one of my classes we had an assignment to create a blueprint of a dream job. When I presented this idea to my class, everyone was so excited and was like, “You have to totally do that!” I was an environmental science major, but had played music since I was four. It’s funny sometimes the things that you’re meant to do have been right in front of you the whole time. So I had this idea, but knew nothing about running a non-profit. I googled “rock camp for girls” and ended up finding Rock ‘n’ Roll Camp For Girls in PDX; I immediately contacted them to find out more information. They introduced me to the entire Girls Rock broader community. Seven years later, we’re the largest Girls Rock program in the world.

JB: Because…. equity, right? It’s so important for girls to have positive role models who show them that they are powerful. Statistics tell us that 70% of 10 year old girls don’t feel like they are good enough. This program exists to help change that statistic . Women have been conditioned throughout history to not take up space in the world, to be silenced, to feel like there is a competition between each other even.

We’re teaching them music and the creative arts, but really music is just the vehicle for building their confidence, showing them their power, acknowledging their most authentic self, teaching them to empower each other and support each other, and giving them the space to be loud and be heard and be seen.

AF: Do you feel like the learning atmosphere is more supportive when women are collaborating with one another?

JB: Not always. I think women (especially young women) are taught that there is a competition of who’s the best and that leads to these feelings of scarcity. So initially I think learning with all women can feel stressful and there’s loads of feelings, there’s a lot of working through these conditioned responses and helping shift the girls’ mindsets to one where we are being true supports to each other. When that shift happens and they see how powerful women are when they are working together, there is just nothing in the world like that, not only for our girls but also our staff.

AF: The school has five different “tracks” – Rockband, Film & Photography, Journalism & Creative Writing, Music Production & Engineering, DJ. How did the creative team at Girls Rock narrow it down to those subjects?

JB: We started with Rockband, which is the bread and butter program of all the Girls Rock programs world wide. Then a few years ago we added Photography and Filmmaking. This summer we added Journalism, DJ, and Music Production and Engineering to our sleep away camp with our teens. I only see us adding more creative tracks as time goes on. Next year I already want to add Live Sound Engineering and Slam Poetry.

AF: So exciting! I love how many technical aspects of music you’re tackling. Any synthesizer building? My husband’s been into them the last year or so.

JB: That’s so awesome! One day! Though we do partner with an amazing non-profit called Techne. The first year they came they taught the girls how to build contact microphones, another year they had them building hydrophones (so mics that can be submerged in water). It was pretty awesome – you’d have the submersible mic running though a guitar amp and the girls would put pop rocks in the water and make all these cool sound beds during their performance. This year Techne did a flashlight orchestra with the girls. They made oscillators that were triggered by different color light. At the end of the week we hid all the instruments they had made and gave the kids flashlights to go find and play each others’ instruments, like  a super rad rock camp scavenger hunt.

It was even more amazing because the very first time Techne was here, I was having dinner with [Techne founders] Suzanne and Bonnie and Suzanne was telling me her ultimate dream was to build this flashlight orchestra with the kids and I was like “Yes! I’m so in, when can we make that happen?” Then this year was the year. It’s so cool to see all those things pan out. Music Production was another thing that I wanted to be a part of our program from the beginning.

AF: This year, Girls Rock Santa Barbara also partnered with the largest Syrian Refugee non-profit in the US, Syrian Community Network. 15 Syrian Refugee girls were able to come to camp. What was that experience like?

JB: It’s hard to describe what an impactful week it was. The stories of hardship that these girls have faced and are still facing is heart wrenching, but their resiliency and kindness and bravery – fuck! I’ve never been so moved in my life. What a gift they all are. Last week we had so many kids from all over the world: Denmark, Brazil, Japan, Russia, China, Mexico, Syria. The girls were all so supportive of each other and so many friendships were made. There were so many brave kids and risks taken and the creativity that came from these girls feeling safe and loved and free to create without boundaries… it was mind blowing what they created. We just had this microcosm of how I wish the world truly was.

AF: How wonderful for all these girls to meet each other! I didn’t realize the program was so international – or was this a special event?

JB: Our sleep away kids come from all over the world (and our staff too); we are bringing 65 women from nine different countries to teach this summer. It’s so awesome! We’re always looking for rad female identified teachers every summer and workshop leaders and bands!

AF: You’re a songwriter yourself, with pieces like “Vespertine” and “Gypsy Heart” even making it into a Sharon Stone film! How did you go from being an eight year old writing songs in her bedroom to a writer / producer working with artists in a professional setting?

JB: Music has always been my whole heart. I think growing up I mostly thought that being a musician (for a living) was almost like saying unicorns exist. I was really scared for a very long time to share my music. I would just create and create and the songs would come and go over the years. When I was recording my first record, Beautiful Mistake, which is the one those two songs are on, my engineer helped build my confidence so much as an artist. He taught me my way around the studio and engineering and my brain started to expand. One day I just walked into the studio and was like, “I think I want to write a bunch of pop songs!” I’d never written pop before and once I started, I’ve been super hooked ever since. This is the first pop song I wrote and produced:

I’ve got a new song coming out this year called “Glass Heart” that I recorded at 137 Productions. I’m really proud of it!

AF: It’s great that the girls get to work with so many talented women in the industry!

JB: Our teachers are so so creative! They are the coolest. Every summer I end up falling in love with all these new bands.

AF: Who are a few of the bands you’ve become a fan of through the camp?

JB: So I am a super diehard fan of Ramonda Hammer and Spare Parts For Broken Hearts. Lauren Kop’s project Mini Bear is just insane. Blush is probably one of my favorites right now and for sure and Marley Ferguson’s project Fade will blow your mind.

AF: In January, Neil Portnow, the president of the Recording Academy, received a great deal of backlash when he said that women in the music industry need to “step up.” It led to the hashtag #GrammysSoMale and may have convinced Portnow to step down. What do you think actually needs to happen within the industry for women to be seen and heard more clearly?

JB: So, it’s really hard for young girls to dream up what they can’t see. So number one, dismantle the boys club. Hire women. Everyone hire women. Hire so many women that men start complaining that women are getting all the jobs. Then young girls will see what’s possible for them and the cycle will shift. A movement creates visibility which is always great, but actions have to follow. Women are so smart and powerful and talented. The future is female!

AF: What words of advice do you have for the next generation of female musicians who are currently dreaming, writing, and noodling in their bedrooms?

JB: Let people see you when you’re ready. Support your friends in their dreams. Don’t gossip about other women (even if you think they deserve it) – be a part of the solution. Be as honest as you can be with your music, and when you think you’re being as vulnerable as you can, try to push yourself even further. Focus on being brave and not perfect. See the world and get to know all kinds of people from all walks of life; our differences are beautiful and what connects us as woman is so powerful. Women together are unstoppable. Rock On!

Are you interested in joining the team at Girls Rock Santa Barbara? Check out the volunteer & teaching opportunities on www.girlsrocksb.org! If you know someone who’d like to attend camp, Girls Rock is already taking registrations for next year and for their after-school program.