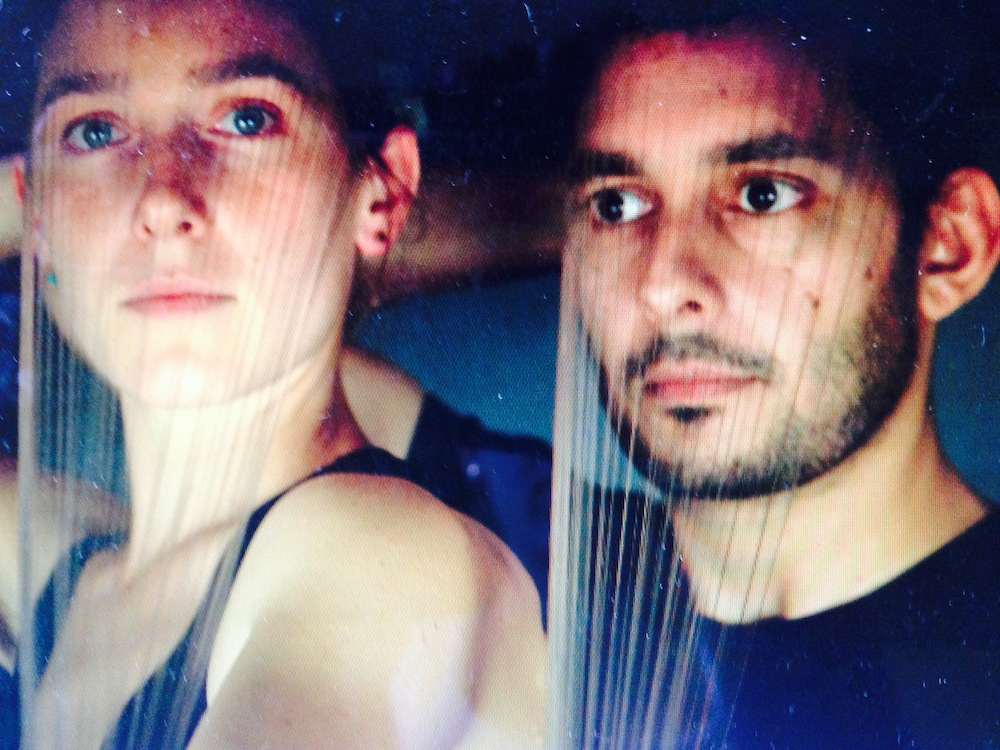 When Arone Dyer and Aron Sanchez met in 2000, Sanchez had already been building instruments for years. For him, constructing the instrument came part and parcel with creating sound. When he speaks about creating his gase–a guitar-bass hybrid, and the namesake of one-half the duo Buke and Gase–there’s no sense of novelty to his tone; he makes instruments to suit the sound he wants. Arone Dyer, perhaps even more straightforwardly, made her first baritone ukelele (the buke) as a way around her carpel tunnel syndrome. Their philosophy is no-nonsense, the resulting sound otherworldly. The Brooklyn-born two-piece, more recently of Hudson, NY, uses every limb at its disposal: Dyer and Sanchez dreamt up their own breed of kick drums and something called a toebourine to accompany their primary instruments, in the name of making a heavy, cataclysmic sound filled with contradictions of darkness and delicacy, percussive rhythm and cacophony.

When I called Buke and Gase last week, they were on the road, in the latter leg of a short tour. Dyer answered the phone, her voice pleasant and frank, breaking periodically into little bursts of laughter. In Buke and Gase’s swampier songs, this voice works like a foil to the distorted instrumental lines. It rises above the chaos, clear and soaring, a homegrown instrument in itself.

AudioFemme: So, you guys are on tour. Where are you right now? How’s it been so far?

Arone Dyer: We’re on our way to Chicago from Detroit. It’s been great! We started in Boston and went to Montreal and Toronto and Detroit last night. It was a pretty short tour.

AD: Um, no? Yes? There’s a lot less anonymity in Hudson. You move into town and you meet everyone. It’s a very small town. Everybody knows what we do, and we know what everybody does. In Brooklyn, you tend to like, have your scene, which is the group of people you spend the most of your time with. That kind of limits your friendship base to the size of a small town. Which is pretty much what we’ve got in Hudson. In Brooklyn, or New York, or any larger city, there’s also the influx of other people who are curious or who you wouldn’t otherwise see on a regular basis.

AF: I actually used to live in that area. I know that Kris Perry (a local artist who builds sculptures that operate as musical instruments) lives around there, too. Have you ever played with him? Do you think there are some elements in his work that resemble what you do?

AD: Oh yeah, totally [fusion_builder_container hundred_percent=”yes” overflow=”visible”][fusion_builder_row][fusion_builder_column type=”1_1″ background_position=”left top” background_color=”” border_size=”” border_color=”” border_style=”solid” spacing=”yes” background_image=”” background_repeat=”no-repeat” padding=”” margin_top=”0px” margin_bottom=”0px” class=”” id=”” animation_type=”” animation_speed=”0.3″ animation_direction=”left” hide_on_mobile=”no” center_content=”no” min_height=”none”][we’ve interacted.] His musical instruments are mainly sculpture that makes sound. That’s what’s really interesting about his work. Our work is not necessarily sculptural, it’s more that we make the instruments to perform the sound that we specifically want to get. Form follows function with us, whereas for him it’s the form that comes first, I think. Although he integrates it, too.

AF: Can you tell me a little bit about your songwriting process?

AD: Sure. Basically, all of our songwriting comes out of the two of us in a room together. We don’t bring anything to the table necessarily from our own personal stash, our own ideas. It’s very rare that that happens. Usually Aron and I get into a room and we sit and improvise for hours on end. We record it all and then we go back through and listen to it, just kind of sift through the whole improv, and pick out stuff that catches our ear, or that we hear some kind of potential in, and we work with that. We’ve tried taking parts and contriving them into full songs, or taking several parts from different improvisations and putting them together, or just taking an entire improv as it is and learning that. So there’s lots of different ways and it all comes out pretty organically and differently each time.

AF: And it’s a totally collaborative process at this point?

AF: How did the two of you meet? Were you involved with other projects at the time?

AD: A long time ago, in 2000. I was roommates with one of his friends. We were both musicians, but I don’t know if we were doing anything specifically at that time. We started playing music together pretty much right away.

AF: Aron, you were already building instruments at that time, right? What got you started making your own instruments?

Aaron Sanchez: When I was really, really young, it was part of the process of me learning to be a musician. I just got really into taking things apart and putting them back together. It was just natural for me to get into it like that.

AF: Did anyone teach you how to build instruments? Did you take formal music training?

AS: No, I was self-taught. It was mostly like, “Oh, I want this instrument–I’ll make it!” That kind of attitude. I studied classical piano for about nine years, and I taught myself guitar, and maybe some drums. I started playing bass. I became more of a bass player for a long time. I took some lessons here and there, but primarily I’m self-taught.

AF: Who writes your lyrics?

Arone Dyer: I do. Or it’s mostly me, probably about 90%. But we talk about them.

AF: Do they usually come after you’ve written the music?

AD: It totally depends. It’s different every time. Sometimes it’s straight from improvisation, where I’m mumbling or saying something weird and I’ll try to phonetically translate that and it becomes the base of whatever story it is. Sometimes lyrics come from a dream diary. I keep track of my dreams.

AF: That totally makes sense. Your lyrics always seem to me to be kind of surreal and dark. Do you prefer to write lyrics that don’t have an immediate, explicit meaning?

AD: (laughs) I mean, I’m human. I like to have things make sense. I look for patterns, that’s what humans do. So generally that’s what I go towards, but there are many times when it just doesn’t happen.

AD: Dark, no, it’s not always intentional. Sometimes it is. Sometimes it’s born out of the feeling of the music, too, because our music kind of heavy. Or sometimes it’s not–the contradiction of having lyrics that are dark and a sound that’s very light, I think both of us find that contradiction really interesting. So lots of times the [music and lyrics] end up being contradictory or…dissonant. Or maybe I’m just a dark person. I can’t tell.

AF: On your albums–for example, on General Dome–do you have a vision for the songs before you begin to write or record them?

AD: No. Not at all. We never have a plan. Like I said–we get into a room and we improvise. What comes out of that is where we are.

AD: No. I mean, Aron tends to make a new instrument every three months or so. Or twice a year? Well, he’s made something like thirteen different gases, and sometimes they have the same neck but a different body, or a different neck but the same body, of they’re entirely new. He’s constantly developing a sound.

AF: Do you come across people who want to play a buke or a gase? Do they ask you for lessons?

AF: Do you make instruments to sell, or would you consider doing so in the future?

AD: No, we don’t sell instruments. [As for the future,] it depends. I think Aron would say the same thing.

AF: Has there ever been an instrument that ended up making a sound completely different than the sound you had thought it would make?

AD: No, I mean, we’re not just building blindly. The instruments I’ve built, or created, were for a specific thing. In the past I’ve built an instrument that I wasn’t sure how it would sound, but I basically made a tenor bass. I’ve been thinking lately about doing something different for my instrument, though. I’m kind of ready to move on to something else. Maybe in the future, I’ll come out with something where I won’t know how it’s going to end up.

Buke and Gase will keep their live act on the road in the coming months, and are slotted to appear in Ireland in December! Check out the elaborate and fragmented video for “General Dome,” off the  2013 album of the same name, below: