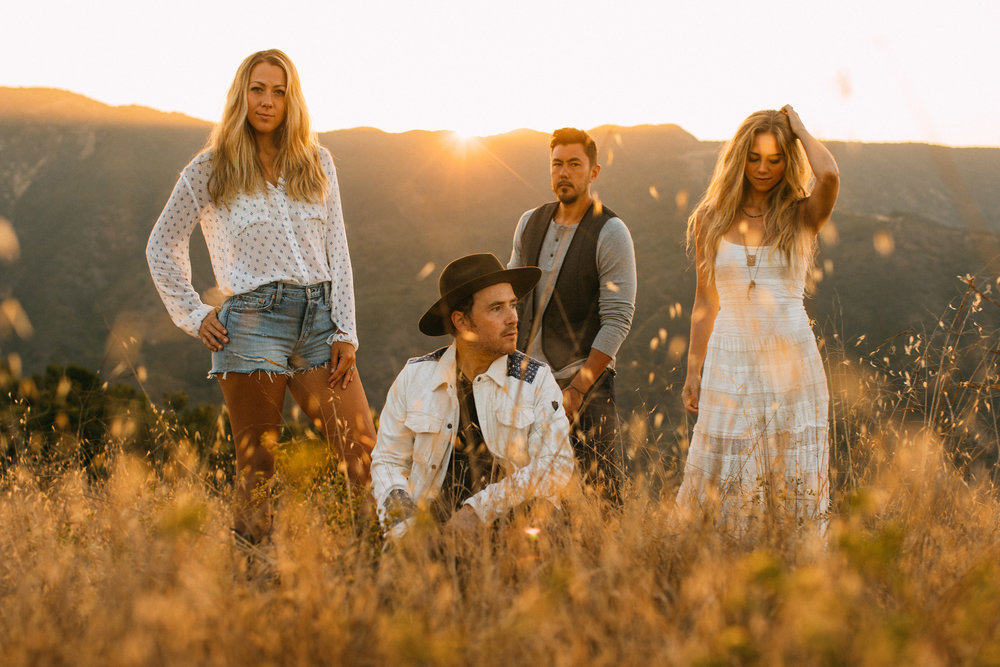 Country’s musical threads have long been tattered, torn, and intertwined. The vastness of the genre ─ from bluesy front porch pickin’ to the pristine pop-country of Patsy Cline and Eddy Arnold to today’s hip-hop filtered stride ─ relies heavily on its music-makers and a willingness to remember the past but push the needle forward. It can often seem as if mainstream radio has largely ignored its own roots, but there remains great traditional commitment on, and off, the airwaves.

Rising four-piece Gone West ─ an effort forged by Grammy winner Colbie Caillat, Justin Young, Jason Reeves, and Nelly Joy ─ call upon an array of styles, approaches, and aesthetics for their debut album. Canyons operates as a canopy of the format’s expansive countryside, switching among dusty C&W, glistening pop-framed sweeteners, and electrifying rock-fueled anthems. They never seem to lose their way, simply darting from one song to another, adding on thick harmony work you’d find on any Carter Family or Little Big Town record.

Their eponymous song cracks open the record, spinning out with dream-seeking ambitions, as they learn to let the past go and carve their own path. “I’ve gone west, rollin’ down the highway like a tumbleweed,” the lyrics keep time with the rhythmic pulse coursing in their veins. “I’ve gone west, where the canyons fall into the deep blue sea.”

Immediately, there is an invigoration and life-confirming thrill motoring throughout the entire 13-track release. Their first Top 30 radio hit, “What Could’ve Been,” is sorrow-baked, a gripping tune in which they reminisce about a former lover whose memory falls through their hands like water. “I haven’t stopped thinking about you / Has it really been this long?,” ponders Caillat, her silky voice draping over the melody. Only scorched earth remains between the two lovers, and drenched in unbridled passion, even now, the imagery they paint bubbles up in vivid, sharp colors with the chorus: “We left blood on the tracks / Sweat on the saddle / Fire in the hills / A bullet in the barrel,” the four croon together. “Words never said in a story that didn’t end / Looks like you’re on the mend and I’m on the bottle.”

It’s quintessential pop-country, dancing between sunny rays of throwback style and contemporary flair, and the quartet ride that musical saddle start to finish. “When to Say Goodbye” slides into a similar emotional side-pocket, shades of melancholy casting a heartfelt shadow, and it is their vocal framework that is most striking. “I don’t wanna leave / I don’t wanna stay / I don’t wanna keep saying the things we don’t wanna say… truth or lie,” their ache is irresistible.

“I’m Never Getting Over You” skips across a piano base, allowing Caillat’s lead vocal to break your heart again and again and again. Reeves takes the reigns in select moments, Joy and Young heaving with some absolutely stunning harmonies that’ll leave you breathless. “I can’t stop you from leaving / And you can’t stop me from loving you” is the kind of admission you don’t want to hear, but it’ll eventually be for the better. Crashing and burning is never easy in the moment, but time, and the slow climb out, leads to transformation.

An airy, acoustic arrangement, “This Time” is perhaps the crown jewel, a performance both exquisite and draining. “Oh I’m gonna stop right now and call my momma this time / Gonna take a sick day when I’m feeling great,” they sing, their words a reminder that time is a relentless force in our lives, but in relinquishing some control, we can learn to cherish the small moments before it’s too late and it all becomes nothing more regret. “I’ll keep my coffee black and sip my whiskey honest / Hold on to hope, and let go of the hate,” they continue. They unravel their heartstrings with clarity, the frays part of the journey, and its reminder to love and live life could not have had better timing. “Life and love don’t age like fine wine / There’s no time to wait to taste the sweetest vine.”

Gone West’s Canyons zip-lines over other emotional focal points (“Gamblin’ Town,” “Home is Where the Heartbreak Is”) and radio-charged ear-candy (“Slow Down,” “Confetti,” “R&R”). With a collection of producers, including Jamie Kennedy, Jimmy Robbins, Eric Arjes, Nathan Chapman, and Alysa Vanderheym, as well as themselves, the band plant their flag firmly in the modern conversation. Their foundation is so clearly nurtured that when they do veer into fluffy, feel good territory, they’ve more than earned that right. They are here to stay.