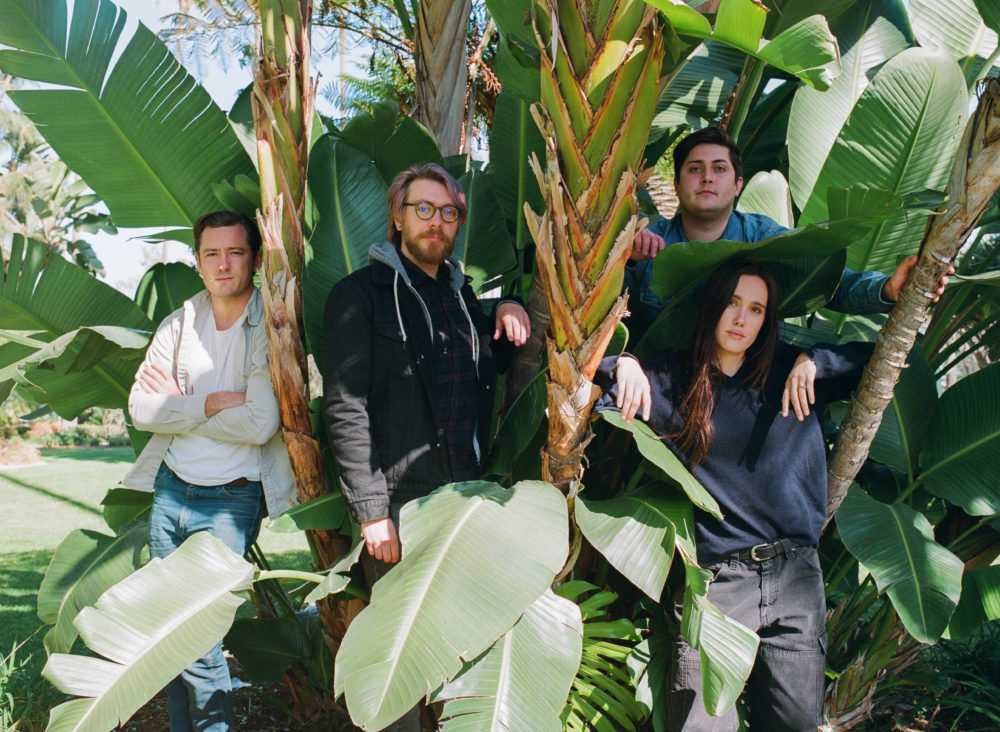 When the members of LA-based indie rock band Atta Boy are together, it’s easy to tell they’re childhood friends. The group was first formed when lead singer Eden Brolin, guitarist Freddy Reish, keyboardist Dashel Thompson, and drummer Lewis Pullman were in high school, and their first album Out of Sorts was recorded soon after graduating college. After an eight-year hiatus, they’ve just reunited to release their sophomore album, Big Heart Manners.

“[For our first album] we weren’t very emotionally mature,” points out Brolin, citing the growing up the band did in the interim as a major creative driver of the album. “There was something about that flip-flop and taking risks in either direction and seeing the growth in something even though you put it down for a while.”

“We were curious to get back together and see what our sound was because it had been eight years since we were in the same room together,” Pullman adds. “My personal goal was to refine what our sound was and reintegrate and just kind of challenge ourselves to push each other into new realms.”

In contrast to the more upbeat, poppy vibe of Out of Sorts, folk and country influences are audible in the new music, which is more reminiscent of bands like Band of Horses or Edward Sharpe and the Magnetic Zeros. The new album also incorporated some new instrumentals, including acoustic guitar and woodwinds.

In the first single off the album, “Devoted,” Brolin’s smooth, mellow voice reflects on a troubled friendship. The second, “Shade,” was co-written by Brolin and her partner Cameron Crosby and is based on a macabre dream she had about twins living in the same big house yet separated in different rooms, who ultimately took their own lives together. “What I take most and enjoy most from my dreams are just images that give you a different sense of what your own reality is,” she says.

Whether pulled from a dream or from those encountered in real life, Big Heart Manners is populated with a wide range of characters, their stories rendered in potent lyrical imagery. “Every time I hear lyrics that I’m amazed by, the first thing  I want to do is look up the analysis. It’s nice to hear an explanation to some degree, but it’s also awesome to leave that up to the listener to have their own relationship to the words,” Brolin says. “I want people to have their own experience with it.”

The album’s title comes from lyrics from the song “Lucky,” which the band members all wrote together. Like “Shade,” it centers on a rather pitiable fictional character. “Your boss at work tells you that you’re dumber than dirt / but you got them real big heart manners,” Brolin sings against simple, subdued keyboard chords.

“It’s about somebody that just sort of persists through the shittiest shit and just mean fucking people all day that just don’t give them the benefit of the doubt, and still, through that, being able to lend yourself to trying to be the best possible person that you can be,” says Brolin, who is also known for her acting work on shows like Beyond and Yellowstone. “And that’s what I think big heart manners are.”

“The best way to beat hate is to beat it with love, that’s what ‘Lucky’ does,” Reish agrees.

The band is currently collaborating with animator Deepti Menon on a video for “Lucky,” as well as an additional EP. In the meantime, they’re serving as ambassadors for the organization for Headcount, which helps people register to vote, and will be posting information on how to vote on their Instagram and even their previously inactive Twitter. “That’s gonna be our first tweet and could very possible be our last tweet,” Reish jokes. “A lot of people feel powerless when it comes to their vote or even if they should vote, but Headcount has tons of valuable information that can help you find and support candidates who actually fight for change, not just preach it.”