It’s July, a month in which listing the best albums of the year so far has become nearly as ubiquitous in the blogosphere as making a list of the best albums of the year in December. Here at Audiofemme, we aren’t so much into ranking the releases of the last six months as we are simply highlighting the music that’s made us super excited to be doing what we’re doing. The following list is by no means comprehensive – we really need some more time with the new Spiritualized record to wrap our brains around it. We can barely keep up with the bi-monthly output of, say, Ty Segall or Family Perfume. We’re saving ourselves on that Sigur Ros album til we see them live in Prospect Park at the end of this month. Dirty Projectors’ Swing Lo Magellan deserves a whole essay rather than a brief blurb. And you’re probably already tired of hearing about how great Grimes is, so we took a mini-break from extolling her virtues.  We have a feeling we’ll still be raving over the following selections in six months, so you’ve got plenty of time to run down to the record store and buy us some vinyl before the holidays hit.

Death Grips – The Money Store: Zach Hill’s newest side project melts faces in a way that last year’s Exmilitary only hinted was possible. Its innovative melding of experimental hip-hop rhythms and aggressive lyrical flow, paired with rapid-fire samples and grinding electronics manages to harness an intense energy while avoiding the pitfalls of akin genres which can be grating, uncreative, and way overhyped (coughcoughdubstepcough). It’s hard to get over an opening scorcher like “Get Got” (especially when producer Andy Morin turns up the echo on Stefan Burnett’s staccato “stopstopstopstopstopstopstop”) but the album is full of dark gems and deep jams. Fuzzy gongs resonate through “Double Helix”, detached blurbs of sampled pop keys bubble out over “Hustle Bones”, “Fuck That’s” bouncy bongos back Burnett’s riotous yells, gloried synth hooks adorn “Bitch Please”. The group will release a companion album, No Love, in the fall of this year, so it will be interesting to see how the two albums play off one another. Not to mention we’ve got our fingers crossed for an insane tour. 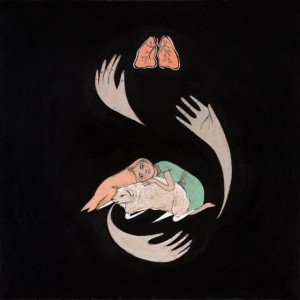 Purity Ring – Shrines: What began as a mysterious and infectious single from a band with the same name as a nearly forgotten emo-punk outfit has transcended its steady trickle of carefully guarded tracks into an auspicious debut that crackles and explodes. The band’s innovative live show is just one angle from which they’ve perfected their aesthetic, and every moment on Shrines feels like magic. Megan James and Corin Roddick deftly transform what are essentially pop songs into something closer to fairy tales, helped by James’ abstract poetics and Roddick’s well-timed production. Album standout “Fineshrines” is a perfect example of the way the two work together, and it still breaks my brain after about a thousand listens, somehow capturing exactly what I always want to feel in song form. 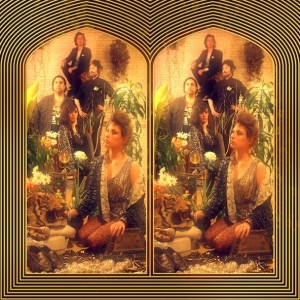 Friends – Manifest!: Anticipation for the debut from Brooklyn-based band Friends began building last year with the release of their single “I’m His Girl”, quite possibly the best argument for open relationships to garner any sort of popularity since TLC’s “Creep”. With that kind of momentum, there’s always a danger that a band might not live up to the hype. But Friends have offered a collection of songs that are not only ultra-catchy and party-ready but also delve into complex topics like female relationships and self-respect with surprising intelligence. Initial fears that lead singer Samantha Urbani’s vocals might at times become grating or that her hip-hop influenced style might lead to some embarrassing moments á la Blondie’s “Rapture” are quickly put to ease – the girl not only has style for miles but a strong set of pipes as well. 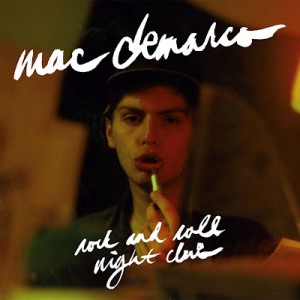 Mac DeMarco – Rock and Roll Night Club: In March Captured Tracks released Canadian creepster Mac DeMarco’s seedy, darkly-tinged debut in which he “recorded a whole bunch of songs on a 4-track, slowed them down, sang like Elvis, and slowed that down a little bit too”. The result is presented as an artifact from another universe where radio a.) still exists b.) dials from grimy “96.7 The Pipe” to groovy “106.2 The Breeze” and c.) plays nothing but blocks of Mac DeMarco tracks. The result makes me wish DeMarco would stalk me. I’d pretend I didn’t like it, but I’d start spending more time in dark alleys hoping I’d catch him in the act.  Though DeMarco’s approach is sometimes comical and his live presence purposely pushes the awkward, the languid guitar riffs do feel like something of a lost transmission from an alternate reality where pop music has been distorted for the better.  If Rock and Roll Night Club were a physical location, I’d invoke 30 Rock’s Liz Lemon by repeatedly saying “I want to go to there” until I was transported.  Fortunately, the album does aurally what science has yet to accomplish. 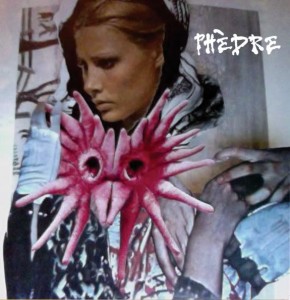 Phédre – Phédre: For a band that pretty much came out of nowhere (actually, it was Toronto), Phédre has managed to blow us away. Their self-titled debut is loaded with infectious production but sealed with the gritty kiss of DIY ethos. The trio (formed by Airick Woodhead, April Aliermo, and Daniel Lee) has created a perfect balance of hyperactive hooks and slowed-down sludge, while distorted, bleary male and female vocals act as oozing cherry on the melted sundae of it all. There’s rapping, there’s punk rock, and there’s lots of sexual innuendos and nods to mythology. Listening to this record feels like taking part in an orgy without the messy and awkward reality of one. What should be a hot mess is actually mesmerizing, an effect enhanced by the feeling that the band never takes themselves too seriously due to a preference for nonsense and debauchery. 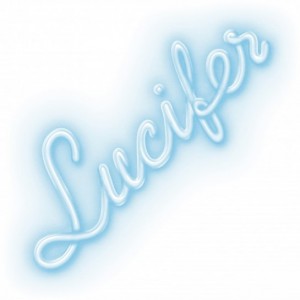 Peaking Lights – Lucifer: Having a five-month old son hasn’t slowed Aaron Coyes and Indra Dunis down one bit. They’re still touring and have just released a new album that sees them further exploring the experimental electronic routes they’ve breached since forming their band. Lucifer is loop-laden, playful, and showcases Peaking Lights’ trademark fuzzy disco dub on most backing tracks, but there’s more sensitive material here as well. The couple’s tribute to their son, Miko, appears early in the album as a pretty little piano ditty. After dabbling in these lovely, lazy beginnings, the back half of the record lands the listener squarely in Peaking Lights’ wheelhouse, with Coyes’ oscillating samples and eclectic, watery beats pinning down Dunis’ smoky, echoic vocals. It’s the perfect follow-up to last year’s breakout 936 and an automatically wistful portrait of the band at this moment in their careers and personal lives. 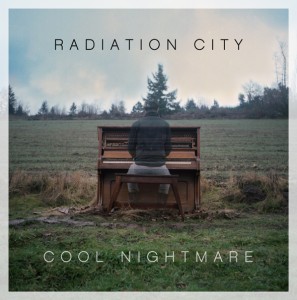 Radiation City – Cool Nightmare: This little noise-pop gem was initially circulated via bandcamp by the Portland based quintet. It’s the follow-up to a critically acclaimed debut, and the band’s pride in the new work shows – they released gorgeous physical copies on their own label (Apes Tapes), with laser-cut sleeve sheathed milk-white vinyl and a gold cassette tape being among the purchasing options. But it’s the music therein that’s truly mesmerizing. Though guitarist Cameron Spies’ vocals make laconic appearances from time to time, it is the haunting, distant coos by Lizzy Ellison that stick indelibly in one’s grey matter; standout track “Eye of Yours” blends these two elements to perfection upon a palette of ominous piano plunking that blossoms into sunny trumpets and twangy guitar. That piano, by the way, was a decrepit artifact from drummer Randy Bemrose’s basement and became the inspiration for the whole album.  Every sound it makes as at deteriorates is part of the auditory landscape on Cool Nightmare, the cover of which it graces. The band laid the ancient instrument to rest in the video for lead-off single “Find It Of Use”. 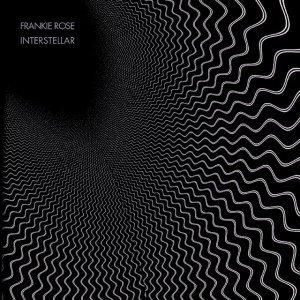 Frankie Rose – Interstellar: As a former member of several prolific noise pop acts (Vivian Girls, Dum Dum Girls, and Crystal Stilts) one might expect Frankie Rose’s second solo album to be very much in that same sort of vein – jangly guitars, vocal bravado, and pounding drums. But Interstellar sees Rose scale these elements back just enough to set the work totally apart. Her energetic nods to new wave, the vaguely cosmic theme, and cohesive production are perfect foils for the strength of  Rose’s songwriting, notable in that it showcases the first moments in which she’s allowed herself to explore a more vulnerable musical persona.  But the songs here are anything but wallflower’s anthems; she challenges listeners in lead-off track “Know Me” to drop the pigeonholing game for a moment and examine the depth in what she’s presented.  And really, there’s so many hazy, wonderful layers in these tracks that it would be a disservice to oneself not to obey her. 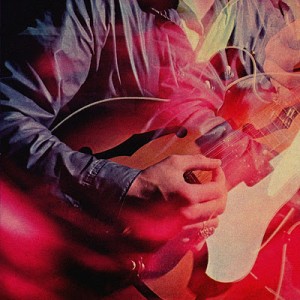 Chromatics – Kill For Love: Johnny Jewel and friends are back after a five-year hiatus during which director Nicolas Winding Refn showed the world their merits by featuring Jewel’s work in his critically acclaimed movie Drive. The band has eschewed the gloss of their 2007 dark disco classic Night Drive for material that is still tightly constructed and very assured but isn’t afraid of its imperfections. It begins with a cover of Neil Young’s “Into the Black” which sets the tone for some incredibly macabre moments made all the more heavy by Ruth Radelet’s haunting vocals. At an hour and a half (scaled down from an alleged thirty-six tracks that the band composed) Kill For Love is almost epic for an electronic album, and weaves a peculiar and solemn beauty through its seventeen tracks. Within this moody context, slightly more hopeful offerings like the title track or “At The Door” glisten and radiate. The record as a whole makes the more lazily produced bedroom pop of the moment seem like the equivalent of a blank stare. 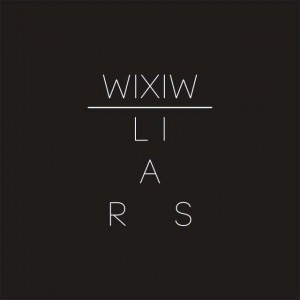 Liars – WIXIW: Liars are well known for exploring spaces and ideas which other bands fear to broach, and in the past that experimentation has manifested itself in layers of thunderous drums, menacing riffs, and hair-raising incantations or equally chilling falsetto. Their sixth studio release, WIXIW (pronounced “Wish You”) is more measured and reserved. The layers are there but they’re more delicate and subtle, taking time to unfurl and mature. Pegged pretty accurately as the band’s foray into electronic music, WIXIW still concerns itself with motifs the band has explored for ten years now, but approaches them from a completely different angle. It’s refreshing not just within Liars’ oeuvre, but against most any album with similar sonic aim. WIXIW proves that electronic production shouldn’t be written off by fans of more traditional music making; in hands so well versed in heavier-hitting rock, the outcome transcends mere curiosity and becomes something astonishing unto itself.