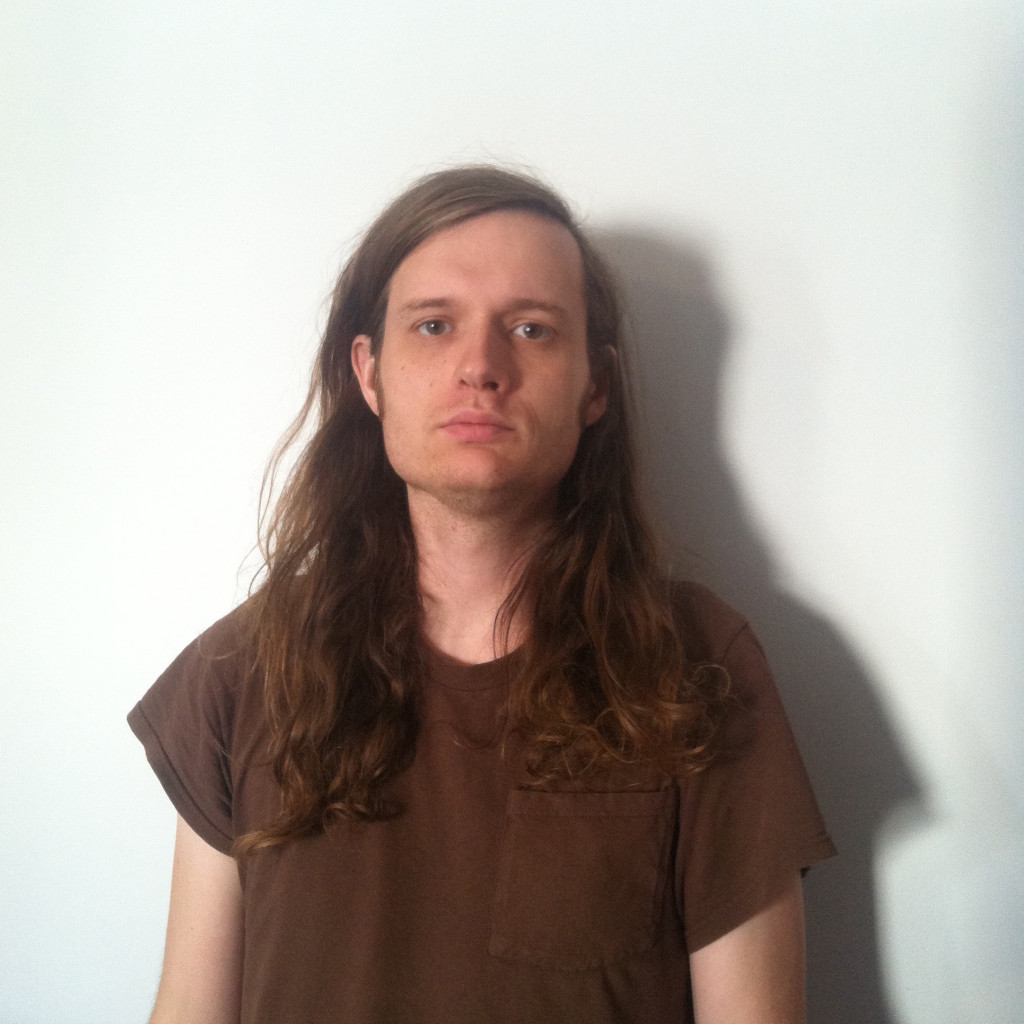 “I like the idea of Rootsy music with heavy handed/slightly inappropriate production.”

If ever you want to forget about a breakup, making an album about one may not be the way to succeed.  Fans will surely read into lyrics and song titles, and journalists will bring it up in interviews and critiques (no exceptions here).  Though I suspect for Doug Tuttle, formerly of New Hampshire’s MMOSS, recording a solo record was not only a form of catharsis, but impossible to avoid.

In the past year Tuttle has relocated to Somerville, Massachusetts and written over 30 new tracks.  He plucked out the finest 11 and dropped his self-titled solo debut on Monday via Trouble In Mind.  The result of his ardent focus on songwriting is glaringly apparent on this record.  The album is a close relative of his former work with MMOSS, lingering within the neo-psych-rock-shoegaze revival, though there is a sense of solitude throughout the record far more so than his prior work.  This is in part because the songs would suit a lone listener equipped with headphones more so than a dinner party.

It is not an uplifting record by any means.  The emotional high points could be described as content at best, blissfully miserable at worst.  But more often than anything, the songs render a sweet, dreamy numbness; as if floating through a universe of fuzzed out colors and kaleidoscopic particles and thinking: “well, that’s just fine.”

The record’s first track, “With Us Soon” opens with a mildly bright surge of choral harmonies similar to those of Colin Blunstone and The Zombies.  This is one of the most audibly optimistic gems of the album and it is difficult to not mention its proximity to the sitar-licked songs of The Beatles’ later work.  Though this cheerfulness is short-lived, as the following “Forget the Days” catapults us into longing with a clash of crying effects pedals and drone vocals.

Tuttle’s voice is consistently sweet yet mournful throughout. His breathy pleas never overpower the rich soundscape he’s crafted.  Though this soundscape is difficult to pick apart instrumentation-wise, because the separate elements congeal so seamlessly. Yet the album is not all low-fi-psych-wave void of instrumental prowess.  On “Turn This Love” Tuttle exhibits his high aptitude for lead guitar solos, which are impressive but never overwrought.

“Leave Your Body” is another high point on the album for me.  The opening croon of what sounds like a B-3 Organ (but I imagine is a tape effect or digital embellishment) sets a melancholic gospel mood that melts into the softer side of My Bloody Valentine.  The song drops into minor chords that become pretty and painful all at once. “I Will Leave” is perhaps the most straightforward pop song on the record.  With its tinges of early Simon and Garfunkel, it recounts the inevitable demise of certain relationships, a dilemma we are all too familiar with.

One of the nicest things about this album is its accessibility.  While Psychedelic music can be convoluted, esoteric and alienating, Tuttle’s songs manage to omit strangeness as well as a pop sensibility that most could enjoy.  I’ve heard no official news, but I suspect that with the kind of habit Tuttle has for constant songwriting, a new album is already being fleshed out.  I personally can’t wait.

Check out Doug Tuttle’s “I Will Leave” below:

Audiofemme recently had the pleasure of chatting with the totally lovely Doug Tuttle, regarding his music and the myriad ways in which it influences his life. Here’s are his words of wisdom:

AF: Do you see this record as an extension of what MMOSS would have grown into had you stayed together, or do you consider it something your own?  Perhaps an exploration of sounds you were unable to seek within the group?
Doug Tuttle: I think it’s quite a bit different then where MMOSS was headed actually, in the last days of MMOSS things were getting more and more jammy, and sounding a lot more like the Grateful Dead.
AF: What are the biggest differences from this record and the ones you released with MMOSS?
DT: The big thing is MMOSS records were generally half improvised JAM type songs, my record is half improvised POP songs haha.
AF: I read in your interview with IMPOSE magazine that you plucked the songs for this album from a platter of 30 you’d recorded.  How do you crank out so much in such a short amount of time?  Are you the restless, fiendish type who just writes and records holed up in an attic for weeks at a time?
DT: I’m self employed and had just moved to the Boston area, I was insanely bummed out, and happened to me having a really slow work season, so I recorded from the time I woke up, to the time I went to bed a lot of days.
Just killing time really, but also, recording is pretty much my favorite thing to do.
AF: It’s interesting to me that Psychedelic Rock’s first incarnation embraced both traditional instruments (Sitar, hand drums, classical guitar, etc) as well as new effects and technology in the Western music industry.  Now in its latest resurrection we are at the pinnacle of digital instrumentation and recording capability.  How has the recent technology within music affected your perception of/involvement with Psychedelic music?
DT: Not too much, I recorded the record on tape, mainly because that’s all I know how to do, I actually had my friend Ben Greenspan give me Protools lessons so I had a way to get the songs into the digital world/sequence them. All the gear I have is either old or home made, for the most part I’m not too impressed by newer stuff, I would really like one of the new digital Mellotrons though.
AF: What is the size of your ideal audience?  Are you a fan of playing live, or do you prefer an intimate group at a party, or even to be heard through a pair of headphones alone?
DT: I like playing to anyone that will listen, more the merrier!
AF: Do you see yourself releasing any future albums (or even a version of this one) on vinyl?
DT: This one is available on vinyl and CD.
AF: I read that you recently relocated from New Hampshire to Massachusetts.  Any particular reason you chose Massachusetts?
DT: I grew up in NH and moved to the Boston area when I was 18 (1999/2000) as it was the closest “big city”.
I moved back to NH shortly after MMOSS started. After the break up of MMOSS I needed to get away and this seamed like a good choice….and the Bee Gees wrote a song about it, so there’s that.
AF: Do you feel there is a nurturing music scene regarding your sound in your new location?
DT: Yeah, the Boston music scene is VERY supportive regardless of what kinda stuff you’re playing, it’s rare to go out here and see two bands that sound anything alike on the same bill.
AF: Are you already writing for your next release, or are you taking a break?
DT: I’ve been working on a lot of solo guitar music lately, not sure it will see the light of day though.
AF: What do you feel is the most contemporary aspect of your music?  How do you differentiate your work from the period sound of your influences?
DT: Hard to say, I’m not really trying to make 60’s music or anything, I just listen to a lot of it.
I think it’s a lot easier for me to avoid the cheesy aspects of “psychedelic rock” or whatever you want to call it….not that I do….but I could.
AF: As a newly solo artist, do you find that you miss collaborative decision-making?  Or are you stoked to be making the calls?
DT: I like recording by myself more I think, at least if it’s something I wrote, I love playing on other peoples stuff though.
AF: You have some interesting sampling going on at the beginning and end of “With Us Soon.”  They’re a bit animalistic and operatic.  Where are these from?
DT: I recorded the record on used tape, that’s whatever was on there when I bought it, I think it’s someone singing opera, it’s playing at double speed so it’s hard to tell.
AF: Of your influences, which ones do you feel came through the most on this record?
DT: Hard to say, I was listening to The Byrds a lot…Shadrack Chameleon, David Hemmings, Pisces, Whistler, Chaucer, Detroit, and Greenhill , The Bachs, The Folklords. Lot’s of slightly twisted Folk Rock stuff, I like the idea of Rootsy music with heavy handed/slightly inappropriate production. I remember Matt form Herbcraft talking about this while I was recording them, telling me to treat every effect like a new toy, and be as heavy handed as possible…I like this ideal.
AF: What new bands have you been listening to lately?  Or are you steeping in the old-but-good for the moment?
DT: I really like that La Luz record, the new Kevin Morby thing is great, Herbcraft…Morgan Delt.
AF: What knowledge have you gained from a songwriting and recording point of view as a one-man-band?
DT: Be excellent to one another.