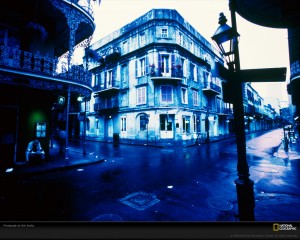 It’s said that New Orleans’ seasons aren’t like any place else’s; instead of the usual spring, summer, fall, and winter, we get Carnival, Festival, Hurricane, and Football. This year, the majority of my live music experiences – in this town that is chock full of them – centered around the bookends to the Festival season, namely, the JazzFest and the Voodoo Music Experience, aka, the Voodoo Fest. Bringing up the rear of my short list of the best live is something we call lagniappe: a little something extra.

I didn’t expect Feist to be as much of a powerhouse performer at the JazzFest as she was – she was on one of the major stages of the festival at the same time as Tom Petty and the Heartbreakers were on a different stage, and the style of her singles and her more recent albums The Reminder and Metals seemed more intimate, countering the spaciousness built for bombast of the Gentilly Stage. Leslie Feist’s stage show was more than up for the challenge – she conquered the large crowd (large despite Petty’s presence across the JazzFest grounds) with her guitar work, the backing of some great musicians, her inclusive stage manner, and with some strong renditions of songs like “Undiscovered First” and “I Feel It All.”

In October, Neil Young and Crazy Horse mounted the even larger Le Ritual Stage at Voodoo Fest, and though they mostly physically confined themselves to a setup consisting of a Persian rug and some of the amps and instruments close-in around it, the sound they made was huge, heavy, and joyous. Occasional past gems like “Cinnamon Girl” and “Needle and the Damage Done” were interspersed with longer, old-is-new-again work from Psychedelic Pill. The shredding and stomping in “Walk Like A Giant” was worth seeing all by itself, but Young and the Horse kept that energy and fire alive all through the performance.

Shamarr Allen and the Underdawgs are thus far underwhelming on their studio albums but incredible live, and JazzFest was no exception. Only Allen can whip out songs that decry the sad state of affairs of his best girl not having sex with him and tout himself as being an atypical rock star (in a song entitled “Typical Rock Star”) with a burning intensity that this time had him destroying a trombone a la Pete Townshend. The next moment, however, had him performing first with his young son and then with a troupe of young players he and the Underdawgs have been teaching music to on a weekly basis through the Silence Is Violence program in New Orleans – and everybody brought a spark of that same intensity to the stage. Allen is a hardworking mass of talent who remains open and free with his time and teachings, and it’s beautiful to see all of that live.

Even in New Orleans’ biggest festivals, a nod must be given to the local hip-hop phenomenon that is Bounce, and Katey Red’s Bounce Azztravaganza at Voodoo Fest was a convergence of far more than Triggerman beats and twerking – it was a chance for Cheeky Blakk to strut and call to a huge audience that seemed to appear out of nowhere once the show started. Blakk has a tough personality of her own that is one thing to hear on a recording but is absolutely stunning to observe in the flesh. Though Katey Red had scheduled other bounce greats to go on after Blakk, she set a bar for the rest that was tough to beat.

Lagniappe: The One That Got Away

A month before The Flaming Lips’ 24-Hour Tour was to come to town, I got some tickets for the final concert of the eight they were intent on doing – only to have to give them up due to a scheduling conflict. Still and all, I kept tabs of the Lips’ travels down through Mississippi and Louisiana via Twitter postings (not tough to do with the #OMA hashtag), got wind that they were coming to Baton Rouge’s Varsity around the same time I would be in town, and I lingered outside in the heat to see what I could see. Sadly, it consisted of a long line of mostly college-age kids waiting to get in – then the doors opened and those with the coveted armbands made it past the air-conditioned lobby entrance into the club itself. Ticket scalpers for the tour? There was no such thing in Baton Rouge, as this was a Class-A event that would likely never come to the area again. Besides, the bus was running a little behind schedule, a consequence of the Lips and their opening acts actually giving their all on the few songs they were performing at each venue on the tour. It was time for me to go.

The people who got my tickets for the New Orleans finale said it was a great show. One of them thought the balloons, confetti, and streamers Wayne Coyne fired off from the stage constituted the biggest mess the House of Blues had ever experienced in its history. I sit here in happiness for them, tinged with some jealousy – one of these days, I will see this band live.