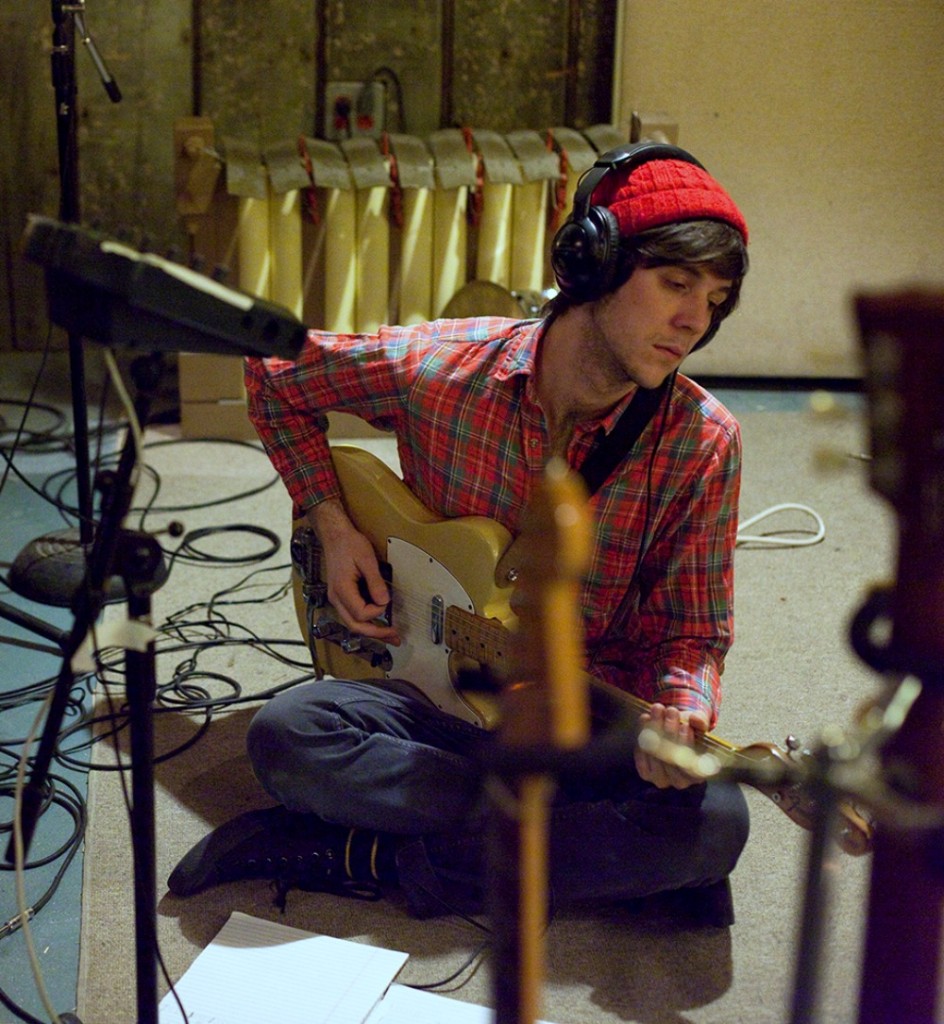 Celestial Shore is a Brooklyn trio that cites bands like the Zombies and the Pixies as influences, but whose sound has never been anything but their own- spacey, floaty, always-shifting rock. When we talked to the band’s guitarist/vocalist, Sam Owens, they were preparing to book it to Austin for SXSW. We chatted about the early and last days of Glasslands, the drawbacks of email, and the time Deerhoof insisted on opening for Celestial Shore in a Syracuse basement.

AF: I really liked Enter Ghost as an album name. What inspired that?

SO: It happened one night when I was in Brooklyn, and I was driving in a cab through all these parts of town, going back to my apartment in Ridgewood. I was thinking about how all the corners I was passing- I was with my girlfriend, Cassandra, and it was very late one night- and we were thinking about how we were driving through all these areas that we had inhabited, or had moments in, and how they were kinda like ghosts. And also, it’s from when Hamlet’s father, when he enters- he’s dead- anytime he enters the stage, it says “Enter Ghost.” He always like, proclaims this evil, revenge plot that Hamlet gets obsessed with, so I kinda thought that was interesting too.

SO: Definitely. We’re going to SXSW in March, and then immediately after that I think we’ll record a third album. We’ve been writing and getting songs together, and we’ll test them out on our tour, then just hopefully jump right into the studio in April or May.

AF: Who are you touring with?

SO: For the first four shows we’re playing with Rubblebucket. They’re funny, and I’ve known them for a  long time. It’s a new crowd for us, so that’ll be fun.

AF: You played one of Glasslands’s final shows. How do you think the closing of that venue, and others like Death By Audio and Goodbye Blue Monday, have affected our local music scene?

SO: Oh man, that’s a big question. I had a “so be it” attitude about Vice buying up that corner, and Glasslands going away, and 285 Kent going away, and everything going away. I was driving down Kent avenue two weeks ago and basically, every area of this place, in NYC, in Brooklyn, is going to be void of any young, spirited, artistic culture. Forever. Which is terrible. Despite its irregularity, Glasslands- and Death By Audio- all these places were huge for so many people. I slept in a couch in the back of Glasslands the first couple of weeks I moved to New York, and my band had a practice space there, and [fusion_builder_container hundred_percent=”yes” overflow=”visible”][fusion_builder_row][fusion_builder_column type=”1_1″ background_position=”left top” background_color=”” border_size=”” border_color=”” border_style=”solid” spacing=”yes” background_image=”” background_repeat=”no-repeat” padding=”” margin_top=”0px” margin_bottom=”0px” class=”” id=”” animation_type=”” animation_speed=”0.3″ animation_direction=”left” hide_on_mobile=”no” center_content=”no” min_height=”none”][the owners] Jake and Rami are really sweet. It’s sad to see them go, but it’s also the way things go. The sad thing is that what’s there now is going to be void of anything valuable except for financial, corporate interests. Which is a very small example of what’s happening in the whole country. This subject totally barrels out of control and anyone who talks about it for more than five minutes sounds like a huge asshole. (Laughs) Ultimately, I feel really sad about it.

I guess the reason I moved to New York is that I put out the first Bandcamp EP in 2011, and I got an email six hours later from these guys in London that said, “Hey, we want to put out your record” and my mind was totally blown. Then Jake and Rami emailed me, “Hey, we want to book a show in New York,” and I was like, but I don’t even live in New York yet- I guess I should move. So… I moved to New York, because we had a show on August 3rd, 2011 at Glasslands. Now I feel old.

AF: Can I ask how old you are?

AF: You must be, since you’re starting to forget things!

SO: That’s from smoking too much pot in college.

SO: I can’t tell you how much I appreciate a phone call versus another-

SO: Email thing. Cuz you know, your PR person sets up these interviews, so you get an email from someone you’ve never met with these really basic questions: “How did Celestial Shore meet? Why do you guys play music? Tell us about your sound.” Why I appreciate of course, the idea of being interviewed in the first place, which is a crazy, strange idea, I think a phone call is way cooler.

AF: You probably sound way different now than you would in an email.

SO: I could be the worst person in the world on an email. Because maybe, I was writing it on my cellphone in the subway with my thumbs. I’m so tired of emailing. Ready for my rant? My life goal, as a human being on earth- and this is going to make me sound like a huge asshole, but I don’t care- is to get a landline, and never have a cellphone, and to not be accountable on my email account. It’s incredible how accountable we’re expected to be throughout the day. If you don’t respond, then you’re the worst person ever.

You read all these great accounts… Lou Reed wrote a song about it- I mean I guess he was waiting for his drug dealer- his frustration about waiting for someone. I think it’s way more mystical, and magical, and sweet and romantic if you can just make a plan and try to do it. That’s my rant. Everyone’s email tone has become so camouflaged… Everybody is like a chameleon. Including myself.

AF: I’m glad I got you on the phone then, so I’m interviewing the real Sam.

SO: My source would be my friends, and the people I admire. I’ve been doing this thing with a couple of close friends where you just write down 30 artists, or songs, or videos, any kind of content you want to share. Not a link, just the name or whatever, on a sticky note. Then you have 30 of these sticky notes, and you give them to your friends. It’s really neat, because you have this physical thing that you can put next to your bed, and wake up in the morning and be like “Oh, yeah, I haven’t checked him out.”

I’ve been listening a lot to country music from the 1950’s, particularly Ernest Tubb. I keep coming back to it. I’m in one of those full circle periods, where I’m going back to 50’s country. The Carter Family, Johnny Cash, all these people. Ernest Tubb, yeah. Listen to his song “Thanks A Lot.”

Also, I’ve been mixing a lot of records, so I end up listening to the records I’m mixing a lot, out of necessity. I’m mixing an old time band right now. The week before that I was mixing this band called Friend Roulette. They’re from Brooklyn and they’re like, chamber pop. My ears are kind of all over the place.

AF: This is a typical interview question you’ve probably heard before, but—

AF: Do you have a favorite venue to play at?

SO: You’ll have to let me think about this one for a minute… Can I tell you my favorite show I’ve ever played?

SO: OK. So in April, we were fortunate enough to go on tour with Deerhoof, and they’re really dear to me. (Laughs) Oops. I’m not into puns, that much… I can’t say enough about Deerhoof, they totally changed the way I think about music. We had a day off, and this kid- his name is Phil Steiger, and he was going to school at Syracuse University at the time- had contacted us about playing a show in his basement. And we were like “Yeah, of course.” We were having Thai food with Deerhoof in Pittsburgh, and they were like, “Hey, what are you doing with your day off?” And I was just like, “We’re playing a show tomorrow.” And they were like, “Oh, Where’s the show?” And I said, “It’s in a basement in Syracuse. Do you guys want to play?” and they were like, “Yeah. We’ll talk about it and let you know tomorrow.”  So we were driving and I get a call from John, and he was like, “Yeah, so we’re down to play the show with you. We’ll play as long as we can open for you.” Because we’d been opening for them every night. Which was, surreal and hilarious. That’s Deerhoof. So I called this kid Phil and I was like, “Phil. Deerhoof’s coming with us. They’re going to play. They’re going to open for Celestial Shore.”

Phil’s a film student, by the way, and has since moved to L.A. and will shortly be premiering the video he made for us.

And then I fell asleep on the floor of the basement, Satomi ran off to find a tire swing, John was playing soccer in the street, it was such as wholesome experience. And since then, Deerhoof has told me that they mixed their last album with that concert experience in mind…I think it drummed up some old feelings of DIY shows they used to do. So anyway, that’s my favorite experience. So far.