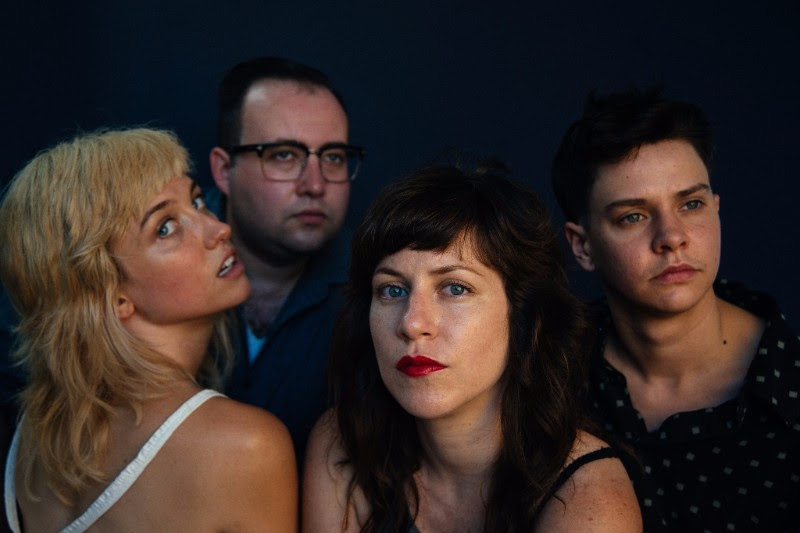 “Art is inherently political. Art informs politics and politics inform art,” said Priests frontwoman Katie Alice Greer in December when her band played a surprise show at Alphaville in Bushwick. This was post-election, and Greer was comforting a distressed audience, but her stance wasn’t surprising; that America is, in reality, a dark place isn’t news to Priests.

It’s fair to say I’ve been waiting for the release of this record, their debut full-length Nothing Feels Natural, for about three years. I first saw Priests at The Pinch in DC when they opened for Pygmy Lush in late 2013. Out came Greer, clad in a velvet leotard, dancing wildly, crooning and alternatively wailing into the microphone. She hypnotized the audience and then woke them up abruptly. She was shameless and original, endearingly femme but fiercely angry at the same time. I’ve been hooked ever since.

On their first release, 2013’s Tape 2, there is a track called “U.S.A. (Incantations).” Backed by horror punk riffs reminiscent of the Twilight Zone theme, Greer tears America a new one. “When people defend the USA I think of Stockholm Syndrome,” she says, “This place was born on a selfish lie. There is nothing to salvage, no great ideals that just got a little skewed.” Greer’s unabashed statement on the truth of America’s crooked imperialism and inequality made me want to scream, made me think that if everyone in the country listened to this song, maybe we’d get our shit together.

We didn’t. Three years after the release of the confrontational Tape 2, Priests have given us Nothing Feels Natural. In true DC DIY fashion, they eschewed the major label release and put the record out on their own label, Sister Polygon.

What makes Priests’ work so potent is their ability to seamlessly tie together the personal and the political. They shift back and forth between themes, illustrating the ways that our political policy affects the moral climate of our society at large as well as the dynamics of our interpersonal relationships. On the first track, opening like a call to arms with its sparse, precise drumming, Greer sings “You want some new brutalism? You want something you can write home about.” This is true; it’s easy to wonder how vitriolic they’ll get in this present political climate, when they were already warning us about America’s rotten core of white male hegemony back in 2013.

But, surprisingly, they don’t go for the overtly political or rabidly angry. The tone is understated, anger served with sarcastic lyrical slights rather than direct address. This album is a testament to the way that toxic masculinity in our public policy and pop culture sifts through layers of influence until it directly affects us in our everyday lives. On “Jj,” the opening riffs are super surfy, and Greer’s vocals are softer and coy. She recounts the beginning of a relationship, and how, as it often does, something changes instantly and everything’s ruined. The moment she finishes wailing “I thought I was a cowboy because I smoked reds,” the tone of the song shifts. Suddenly the surfy riffs are gone, replaced by way more nostalgic, soaring ones. Greer cries, over and over, “You thought I was disgusting,” moving on to say “I wrote a bunch of songs for you but you never knew and you never deserved them.” She does something inherently unfeminine, and that somehow affects Jj’s perception of her, the beautiful perfect creature she’s supposed to be. Every one of us has felt this way. It’s all so familiar — the emotional labor, the self-flagellation, but also the realization of power.

Priests’ interpretation of America’s toxic masculinity is more inclusive than that though, beyond the mere realm of romantic relationships between men and women. “Pink White House” is a powerful rejection of the so-called “American dream,” the supposed end game in all of this. The problem with the American dream, Greer posits, is that it excludes most of America, in all of its white, Christian, patriarchal glory. She points out the irony, repeating “Anything you want, anywhere you want,” over and over. Growing up we’re told we can be whatever we want to be. But in order to fit in this specific, acceptable mold, you actually can’t. But there’s power in the rejection of that ridiculous standard, as Greer would have it: “I’m really not concerned with what you think / You are just a cog in the machine and I am a wet dream soft and mean thick like steam.” A middle finger to the American dream and the expectations of femininity that come with that, she taunts – don’t you judge me, you want me, you want my life.

Overall, this is a great album. It’s audibly interesting, showing a wider range of Priests’ artistic tastes and never redundant in terms of sound. Mostly, though, Priests took the fire and fury expected of them in the age of Trump and turned that on its head, maintaining their raw spirit, but offering a new, more vulnerable spin. These ten tracks relate to our own vulnerabilities and questions of worth as humans, of whether we deserve to be loved and respected just the way we are.

Just as art informs politics and politics inform art, politics inform our interpersonal relationships and vice versa. In “Lelia 20” she sings, “You are a common thief / You’re still using the braun to get the best of me,” but also, “it could be much worse.” It could, but not in this context. Not if you’re still unhappy. That’s what she’s getting across, that you shouldn’t settle for “it could be much worse,” in your own life and relationships. We deserve more, we deserve better.

Priests knew this three years ago, we just weren’t listening.