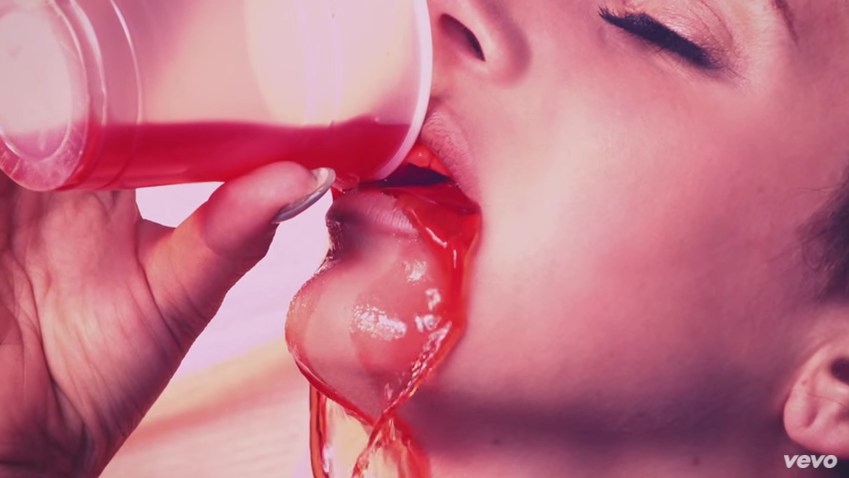 The flower princess of pop nihilism, Lana Del Rey, returned this week with another installment of her haunting visual diaries with the video for “Freak” from 2015’s Honeymoon, featuring none other than the sensual prince of sardonicism Father John Misty. Lana leads us on a disturbingly enchanting 11-minute trip through her dizzying rose tinted world where the word “baby” is seductive currency.

Allegedly inspired by Josh Tillman’s (Father John Misty) own acid trip at a Taylor Swift concert, “Freak” reads as a modern day Charles Manson/Jim Jones-esque hallucinational tale complete with Kool-Aid and airy angel followers donning sandy blonde hair and wispy white clothes. The video opens with Tillman manically waving a large walking stick into the air at a California sky as Lady Lana leads him to a sandy overlook. It would be safe to assume that Tillman is the cult leader, with his Manson beard, but it is revealed to us that it is actually Lana who calls the shots as she places a square of acid on his tongue. It is from this point that we find ourselves with Lana, alone, in what is presumably her cabin lair paired with juxtaposing flashes of her and Tillman tripping through the hills. Eventually, we are shown the ethereal gaggle of disciples draped over a tranced out Tillman. Lana, all the while, is sloppily drinking her own ritualistic Kool-Aid concoction of beguilement.

“Freak” trails off into silence as Tillman dips Lana in a twisted waltz engulfed by white light and smoke fading into heavenly ether. Enter Debussy’s 1905 “Clair de Lune” as the cast is entangled with each other underwater in a baptismal dance that challenges death and rebirth, with a paramount acuteness to the push and pull relationship between the possessed and the possessor.

Could this video be artistic coding for Lana’s recently troubled encounters with fandom? Possibly. But more than likely “Freak” is a call to, well, freaks, and when our velveteen temptress coos: “Baby, if you wanna leave/come to California/be a freak like me, too,” I can’t help but think this video is simply meant as a captivating heretic anthem for the dazed and suffused.