Skip to content
I was super excited to go see Beacon last Saturday night.My exposure to them thus far had been pretty limited to their brief stintat Cameo Gallery for the Brooklyn Electronic Music Fest, at which they onlyplayed a handful of songs. But they were shockingly good songs. Especially considering what one immediately notices about this duo. They look like a couple of sartorially unassuming white kids from your hometown somewhere in the Midwest. Until they start playing music that is. Then they’re magically transformed into bass-blasting R&B/electronic superstars. It was a bit surreal to hear such a cavernous, all consuming sound coming out of the two of them, actually, and it made my attitude toward them swing dramatically from skeptical to deferential in a matter of seconds.

So there I was, waiting outside Music Hall to meet the person from whom I was scalping a craigslist ticket to this sold out show (Tycho, the headliner, is pretty damn incredible as well, which I’ll get to). Suddenly the building started shaking a little bit, and my chest cavity began to vibrate oh so subtly. From a distance I heard opening chords of “See Through You”. And I knew immediately, that this band is as good as I remembered them to be that night three months ago.

I finally got into the show not shortly thereafter, and settled in toward the front to be enveloped by loud bass, hot beats spun by Jacob Gossett, and Tom Mullarney’s smooth reverbed-out voice singing the songs I’ve come to know pretty well at this point, from their EP No Body. After a few tracks, the crowd was glued. Whoever hadn’t heard of them before, or had any doubts about their talent, was elevated to instant fandom, I’m sure of it. And it was then, when these guys knew they had everyone wrapped around their little fingers, that they upped the ante and performed this Ginuwine cover.

And I thought that would be the pinnacle of my experience of this show… Alas, I had no idea what Tycho had in store for us. 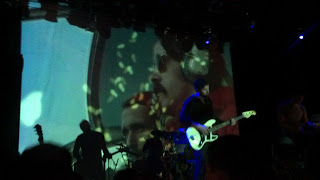 First,and for those of you who aren’t familiar with Tycho, this is a band that putsmore effort into cultivating a spectacular audio-visual experience for theiraudience than anyone I’ve ever seen live. While the music itself is primarily ablend of ambient sounding electronic and live drum/bass/lead guitar, the videowork that Scott Hanson (Tycho’s founder) produces and curates to accompanythe  music is really quite thoughtful, and heightens every song’s sonicimpact with total deliberation; each clip of video is stunningly executed, andseems to be timed to accentuate certain beats, tones, and shifts in musicalphrase to an ideal degree. 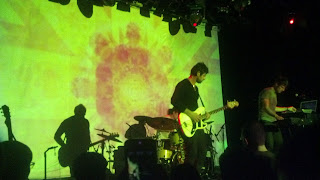 Second,there isn’t so much going on, even despite the crazy visuals, that you can’tfocus on any one musician in particular and feel captivated by their technicalabilities. For Example, the bass player was so good, and stalwart (many ofthese tracks were over five minutes long), that it was easy to get lost in hisplaying and forget everything else that was happening. The band’s first encoreperformance had Scott playing solo, and apologizing to the audience for the noticeable  absence of bandmates, with the candid admittance that he “justneeded to give them a rest”.
Third,these songs are pretty mellow, generally, but they never ever bore. There was adude standing about six feet in front of me who was breakdance-fighting/shadowboxing/going into epileptic shock for the entire set. I swear to god, he neverstopped moving for the full hour and a half they played. There were also anynumber of fist-pumpers and of course the occasional girl who would burst intotears at the beginning of a certain song…
Anyway,please enjoy a video from the show, and hopefully get a sense for what I’mtalking about here. Do trust though, that this little clip in no way does Tycho justice.