It wasn’t supposed to be about The Walkmen.

What started as a fundraiser for Philly’s very own High Line-esque project (known as The Rail Park and every bit as awesome) became something different entirely when Peter Bauer (The Walkmen’s organist and bass player) announced last week via a Washington Post interview that the band had absolutely no plans to make a new record, tour, or really be much of a band in the future at all.

“We really just have no idea,” Bauer said. “I don’t think any of us wanted to write another Walkmen record. Maybe that will change down the line, maybe it won’t, maybe we’ll play shows. I think it’s weird to make a hubbub about something if there’s nothing to really make a hubbub about.”

He went on to include sentiments that have been echoed by other members in the band – that because they’re not the “archetypal rock band where everyone lives in an apartment” but in reality have lived in different cities since the release of A Hundred Miles Off in 2006, getting together for a show is more like Thanksgiving or a bachelor party or a family reunion.  In the fall they played a short stint in Europe, and the summer prior saw them added to several festival line-ups, including Brooklyn’s Northside.  With each one-off they left behind wives and young children, saying goodbye to one family to be embraced by a family of a different sort in what must have been an exhausting cycle.

When the “indefinite hiatus” was announced, there were two shows left on The Walkmen’s calendar: one in D.C. at new venue Dock 5, and the gig at Philadelphia’s gorgeous Union Transfer.  Up to the moment they took the stage, it remained a benefit show for Rail Park as scheduled, supported by a full roster of all-star acts.

Sharon Van Etten was joined by Adam Granduciel (of The War On Drugs), Mary Lattimore and Jeff Zeigler for a three-song harp-inclusive set comprised of Lou Reed’s “Perfect Day”, Van Etten’s own “I’m Wrong”, and Big Star’s “Thirteen”.  Philadelphia’s Birdie Busch and the Greatest Night gave an impassioned performance, Busch stating between songs that in all her dreams, a project like the Rail Park was the best thing she could imagine for Philly.  Spank Rock’s similarly short but charismatic set blended into a rousing performance from Sun Ra Arkestra, led by Marshall Allen.  The stage was filled with nearly twenty vibrant jazz musicians, clad in glittering garb, horns lifted to Saturn (the claimed birthplace of the group’s now deceased founder) in an incredible performance that fused free jazz, ragtime, and big band sounds.  All this after a fully catered shmooze-fest where I binged on fancy cheese and pumpkin mousse.

The celebratory tone changed only slightly when The Walkmen took the stage for what would be the last time until who-knows-when.  Members of Sun Ra Arkestra remained to provide brassy accompaniment for “Red Moon” and “Canadian Girl”.  Ever the charismatic frontman, Hamilton Leithauser’s voice was in top form, his gangly form outfitted in a blazer and tie per usual.  Matt Barrick’s indefatigable drums ricocheted throughout the venue, punctuating Paul Maroon’s confident guitar as well as Walter Martin and Bauer’s turns on bass and organ.  They performed dutifully but never dispassionately.  There was no question that as a whole, the group was leaving behind a legacy as one of indie rock’s most exciting and skilled syndicates.

In looking at a typical Walkmen setlist, there was nothing wholly out of place in the band’s chosen sequence of songs, which included material spanning the band’s fourteen-year run.  But it was hard to escape the feeling that it was curated specifically for a farewell show, seeming at times like a mixtape you’d give to someone you were dumping.  Cast in this last light, the latently wistful themes and lyrics about looking back stood out and took on a whole new tone.  From the hopeful line “You will miss me when I’m gone / But the happy music will carry on” in “Canadian Girl” through the world-weary “All the years keep rolling / The decades flying by” in “On The Water” to the anthemic “And my heart’s in the strangest place / That’s how it started / And that’s how it ends” bellow of “In The New Year” the set could have been a manifesto as to why the band was choosing to leave its spotlight.  And that was just in the first few songs.  They spoke for themselves; when Leithauser mentioned the break-up early in the evening he was almost dismissive of the gravity of it, encouraging the audience to have a great time and celebrate along with them.

And The Walkmen did parlay a well-deserved celebratory attitude.  The sardonic undercurrents, delivered as always with a trademark sneer, gave a sense simply that no one had wanted to overstay their popularity as a band.  In The Washington Post, Bauer put it this way: “It’s been almost 14 years now.  I think that’s enough, you know?”   There hasn’t been a dramatic blow-up or falling out – it’s just that all five members of The Walkmen are ready to go their separate ways.  No one is interested in becoming a band that tours for all of eternity, on into their older years.  Instead, everyone is focused on solo projects.  Leithauser has collaborated with members of Fleet Foxes and Vampire Weekend for an album slated for spring release.  Bauer speaks emphatically about his upcoming solo record Liberation!, a psych-tinged project released under his full name that sees him not only playing guitar but actually singing.  Martin is releasing an album of “cleverly done” children’s songs (Leithauser’s description), Maroon’s doing soundtracks for an unnamed documentary.  And Barrick will likely go in a completely new direction, having shot beautiful photos of the band’s tours, street performers in New Orleans, and his family life among other subjects, now finally able to focus more acutely on that passion. 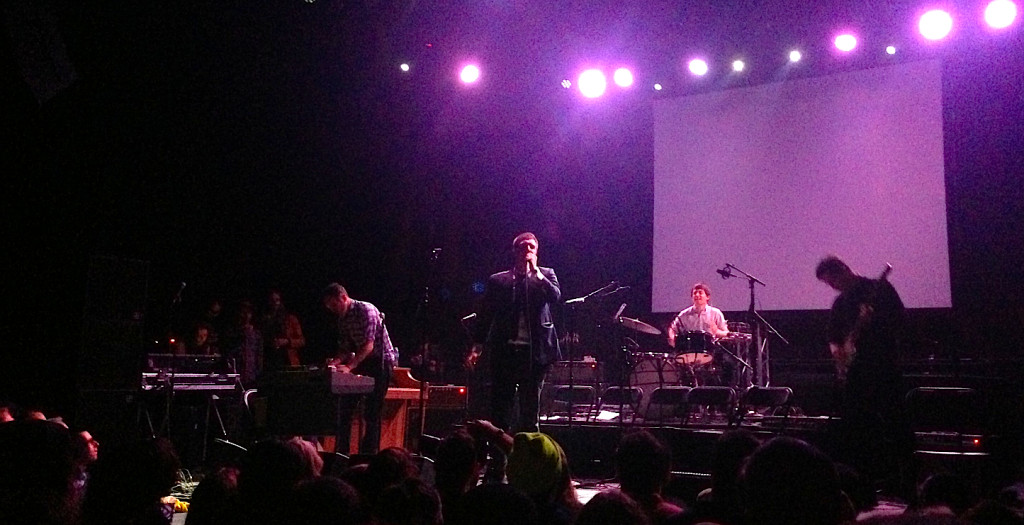 A victory lap was in order, and the last half of the set was just that.  “We Can’t Be Beat” provided the build-up – Leithauser’s voice arced easily over the crowd on the line “It’s been soooooo  loooooong but I made it through” before ending the set with what could arguably be considered their most triumphant swan song, “Heaven”.  He literally lifted a fist into the air during bouyant cries of “Remember, remember!” and the rest of the song was just as sentimental: “Our children will always hear / Romantic tales of distant years / Our gilded age may come and go /
Our crooked dreams will always glow”.  Those feeling particularly nostalgic need only watch the video for the track, which collages archival photos and footage from the band’s career.

Amid thunderous (and maybe even some tearful) applause, they returned to the stage for “138th Street”, a fitting ballad about growing up from Bows + Arrows, serving as further explanation to anyone still in need of a reason for the hiatus, or maybe a reminder that life unfolds no matter what antics you pull.  The crazy things we do as kids recede into memory someday, not unlike that one time, in the spring of 2006, when I spent twelve hours wasted on the lawn of OSU’s campus during a little event my good friend Ahmed Gallab had organized (appropriately called Springfest).  The Walkmen headlined that year, somewhere around the eleventh hour of my drunkenness.  I think I was dancing on top of a speaker when a girl I didn’t know ran by, grabbing my arm.

“Hey,” she said, breathless.  “Wanna dive off the stage with me?”  Well, yeah.  I did.  So we ran backstage, and then onto it, past Barrick and Bauer and Leithauser and Martin and Maroon and leapt into the crowd.  It went by in a blur.  I don’t even remember what song they were playing – just that at the time, they were one of my favorite bands.  On the walk to legendary Columbus divebar Larry’s (RIP to that place), I “knew everyone I saw” so to speak, and everyone had seen me do it, and we all had a pretty good laugh, right there in the streets.

Sometimes, I really am just happy I’m older.  Seven years later, the twinkling, ramshackle piano line of “We’ve Been Had” stirred fans at Union Transfer.  Leithauser introduced the song as the first the band had written, back in the day when the boys really were that archetypal band making a go of a music career by moving to New York, living together, running amok, not knowing where the road would lead.  Everyone shouted those iconic lines along with Leithauser: “We’ve been had /I know it’s over / Somehow it got easy to laugh out loud”.  The jangling melody stretched longer as Leithauser introduced his bandmates “for the last time in a long time”.  Then he made the rounds down a runway set up for the fashion show that had been part of the Rail Park fundraiser, shaking the hands of fans who stood alongside it.

For years I’ve taken The Walkmen for granted, assuming they were a band that would be around forever.  I basically “grew up” listening to them. Not in the way that you grow up dancing in your diapers to your parents’ Beatles records, to be sure.  But these songs were with me throughout my twenties, as I made my way through college, out of Ohio, adrift in the wilds of Brooklyn, and into some semblance of adulthood.  And Wednesday’s show was every bit the reminder of just how good a soundtrack The Walkmen made for anyone going through that process, because they were honest and true in their songwriting as they went though it themselves.  As their narrative ends, the relevance of that contribution only skyrockets.