I’m lost picking out my outfit to see No Honeymoon, just anxiously pacing in black tights while “Don’t Want To” glides through the apartment. I’m digging the ‘80s movie vibes it’s blessing my morning with, Cait Smith’s haunting, hooting voice gently complimenting the sparkling verses, which battle the fuzzier, heavier choruses. “And it gets great aroooound this part,” I mumble to when the guitars truly gut you, backtracking to the 2:30 mark and refocusing my gaze on the cover of their EP It’s Whatever.

This cover owns me, guys. The white dress, the heart on fire, the mournful staring at the skyline from Transmitter Park – it’s almost hilariously emblematic of my city anguish. Even the title, It’s Whatever, is my go-to closing line (“And then he moved to LA and sold the car we made out in, but it’s whatever.”)

No Honeymoon feels like the whole gloomy New Yorkian package, the beautiful cry in the din and all that jazz. Of course I dig it, that’s my image. So I go with the leopard-print-on-stripes combo, the tortured Brooklynite classic. That’ll work. 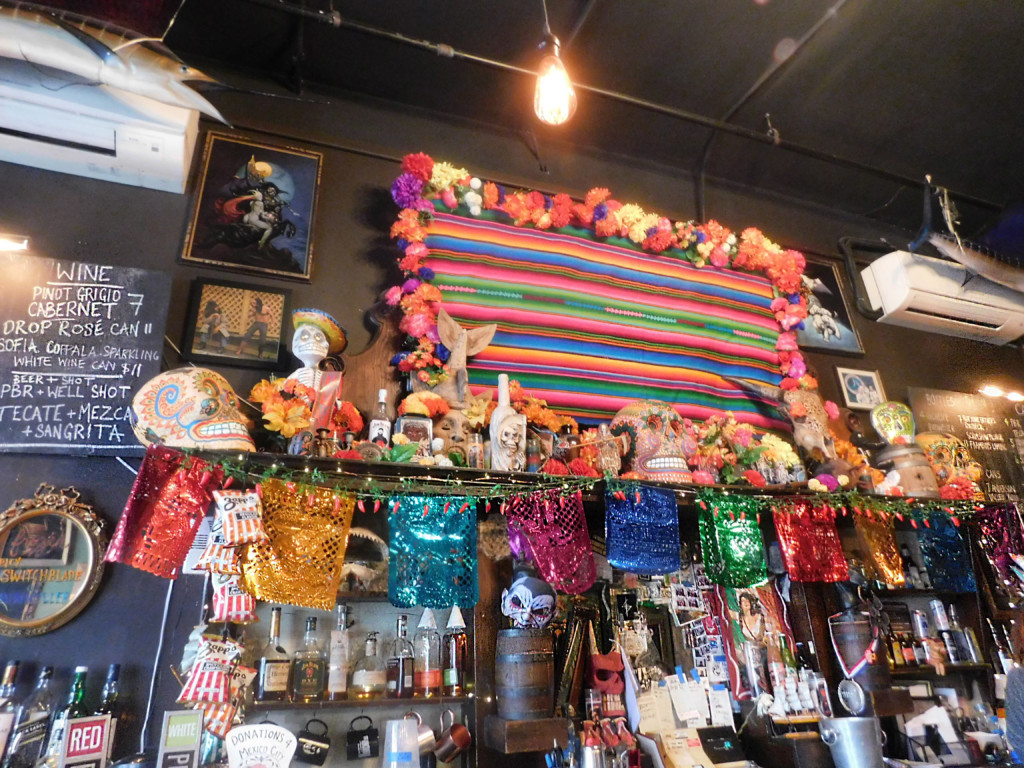 THE SCENE: So between The Anchored Inn’s floating swordfish and Buck Owens & His Buckaroos blasting, I’m bemused. It’s a venue-turned-ironically-garish-Tex-Mex joint that apparently goes metal after dark. But I learn this later (“So did we choose the place just because there were a lot of shows here at one point and now it’s like…a ranch?”), after they explain that their practice space is nearby, in the heart of that Meserole Avenue hub.

I recognize Nate sitting alone because of this iconic green-haired junior year photo, and deliver the helpful line, “Hey, are you like, in a band?” I also recognize Cait with a cute, new short haircut (her bangs are still on point) and Ryan and Rob arrive shortly thereafter.

After two table migrations and one mimosa refill we talk about the start of our day and the end of all times.

12:06 Every day feels like the end of the world, so I’m dying to know how No Honeymoon would defend themselves, and I get right to the point. “If you guys had any weapon that you could use to battle against the apocalypse, like mutant zombies or something, what would it be?”

“Can I do like, mind control?” Cait asks, but we agree that’s more of a super power than weapon.

“I think my instinct is just fetal position. Does that count as a weapon?” asks Ryan. Still not a weapon, although it’s relatably viable self defense.

“I really think it depends on the nature of the threat,” Nate says. “If it’s a zombie threat versus apocalyptic meltdown, that’s totally different.”

Nate very seriously considers his options. “Well, if you have a shotgun in the end times, people will be afraid of that shotgun, even if they don’t know how many rounds you have,” he starts. “But zombies won’t be. So even by racking your shotgun it’ll be like, ‘Get the fuck out of the way.’ Whereas if you had a bat or a sword or something and you have five guys that are much larger, you’re going right down.”

“I love the aesthetic appeal of a bat, though. I feel like I’d look really great with a bat,” I interject. “But aesthetics won’t matter in the apocalypse, so…”

“Nails and glitter – I want it to be feminine.” Everyone laughs at this. Why does everyone always think I’m joking?

“That’s where my brain went first, because you can smash things to shit with a bat, but I’m definitely going to be outmoded with a gun,” Cait considers. “I hate guns, I don’t like them, and I think if the apocalypse meltdown happens I’m not going to be competent enough with guns to be a threat to anyone.”

Ethics and aesthetics will definitely doom us if the world ends. So it goes.

12:15 Cait is trying to purge the olives from her Bloody Mary, which she thinks makes her a bad half Sicilian, although I assure her that I’m half Greek, hate olives, and am a subsequent disappointment to 3/4ths of my lineage. Ryan can’t eat his mom’s lasagna, which we all cringe at automatically.

“Dairy?” Yeah. “But that’s just like your biology, that’s not, ‘I hate my mom’s lasagna,’ which would break her, I’m sure.” You know, Italian moms, and all.

“There was like a really brief period where I was a vegetarian…” Ryan starts.

“Oh, that’s no good at all,” Nate interrupts.

“And my mom was like, ‘But you can still have meatballs, right?’ ”Meat’ is literally in the word.”” We all laugh good-naturedly at this.

“My mom who’s five foot nothing and sounds like Joe Pesci, she’s an angel.”

It’s super cute, but the point is that everyone’s fucking up on the Mediterranean front. 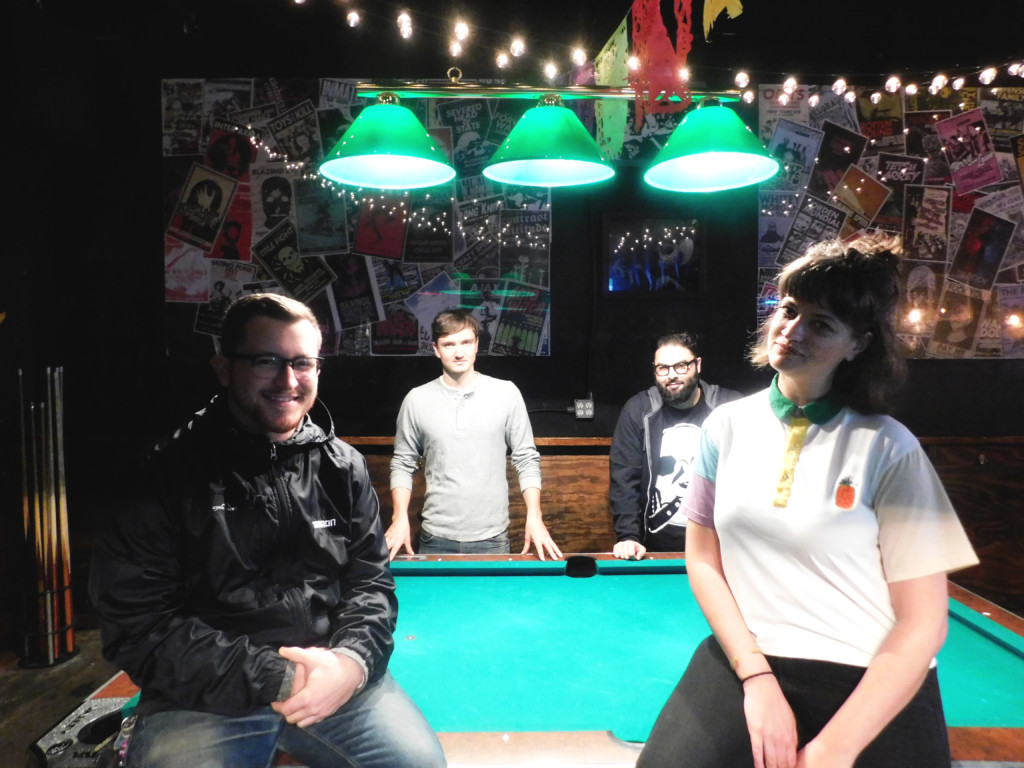 12:26  We put in orders for chicken and waffles, biscuits and gravy, chicken and biscuits, and a breakfast burrito. The mimosas are already hitting hard, ’cause I’m anxiously looking up Taco Bell’s Kit-Kat Quesadilla on my phone, as well as the most recent Taco Bell wedding.

“Well if you go to White Castle with someone it is romantic because White Castle’s disgusting.” I determine, lost in my phone. “And that’s…that’s true love.”

“They call them rat burgers. How can you eat them knowing they’re called rat burgers?” Rob says, before changing the subject. “You ever been to Max Brenner’s?”

“Chocolate by the bald man,” Ryan adds, and of course most of us have; Max Brenner is like the Willy Wonka of New York. Someone you can trust to make a chocodilla.

And Nate drops a bombshell. “You know there is no Max Brenner.” After a half-second hush the group goes into a flurry of multi-emotional reacts:

MG: Why would you fucking say that to him?

Rob: EVERYTHING I KNOW IS A LIE.

We’re all pretty shaken by this conspiracy theory and finally deduce that there must be comfort in the illusion of a bald man making chocolate.

“Everyone knows that the best chocolate comes from bald guys,” Cait says. Obviously. 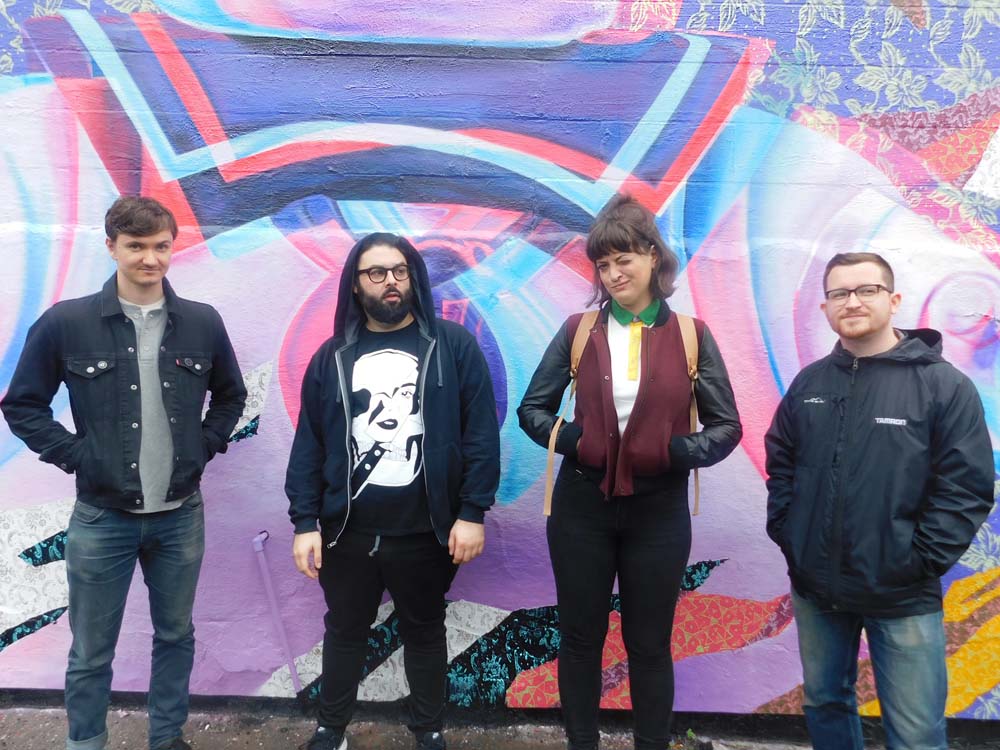 12:42 When I moved here I thought it an amazing and rare happenstance that other people liked David Lynch. And then I lived here for two more minutes and I realized we’re all just pretentious. I’m recounting this because Nate is watching Dune right now, which, even for a Lynch fanatic, is insufferable (based on hearsay).

“I’ve never read Dune, but I’ve had, like, Dune explained to me 69 times in the last month,” Cait says, to more laughter. That sounds right. She also talks about how she hasn’t really tapped into Twin Peaks (she saw a handful of the original episodes) and it’s cool, because I jumped ship on the “new” one.

“Nate owns a shirt that says, ‘Thank you, David Lynch.'” Rob adds. “And it is fantastic.”

“I think I went for a job while wearing it, just a caricature of myself,” Nate says. Respect. 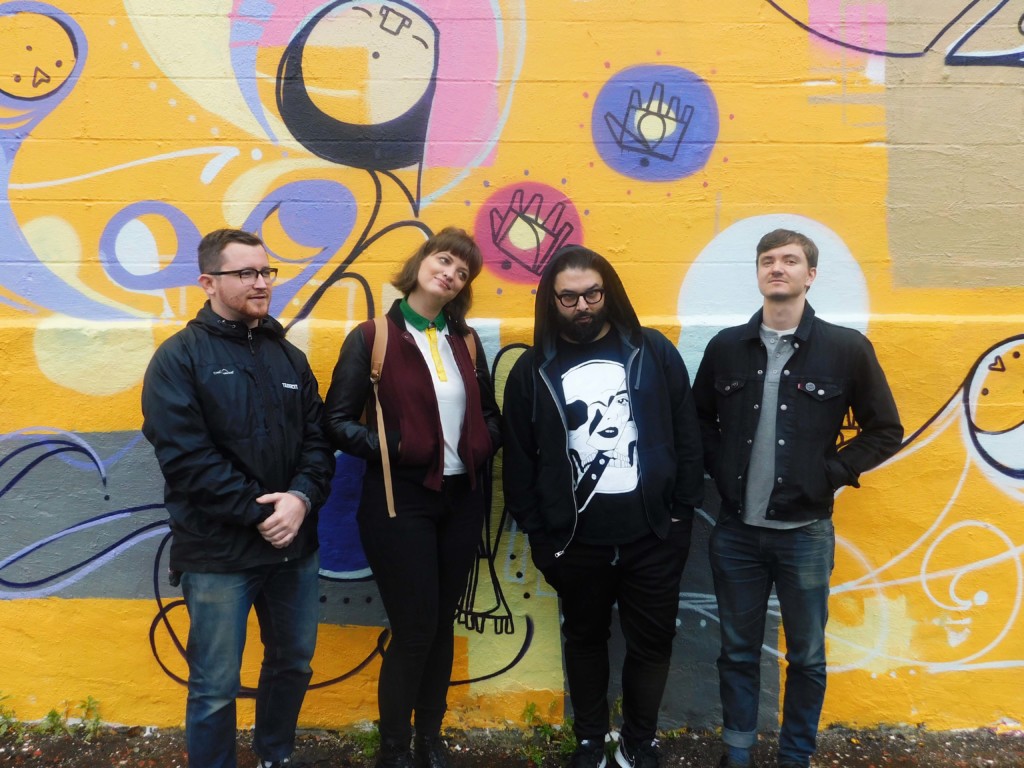 12:53 The New York marathon is happening today and we spend a lot of time going “Fuck fitness.” Cait mentions in passing that it goes through her neighborhood, and connecting the dots I realize she lives in Greenpoint.

And I have to break my “I don’t care about anyone’s new EP” interview policy to ask about the cover: “Is that…?”

“That’s where I go when I’m depressed!” I feel super validated. “It’s like I look out into New York and I think” *mock-dreamy voice* “‘this is what I’m fighting for.'”

“I wanted to ask you about that, because I saw it and I was like, ‘This is everything that I’m about aesthetically.’”

“Rob shot it,” she mentions casually.

“People thought that it was, though. People said that to me,” Cait explains.

“We were like, literally trying to blow up the balloons with fire,” Cait says. “And then I started Googling it and I was like, ‘This is not scientifically possible.'”

“I didn’t think it was real,” I lie. “But the fact that I had doubts means it didn’t look stupid…”

Anchored Inn is conveniently along a row of photoshoot-friendly murals, so after brunch we capture a few shots along some Saved-By-The-Bell-intro graphics. But by happenstance we pass some foggy dumpsters and take a few impromptu shots there instead. Cait jokes that the steaming trash look is more on brand anyway. 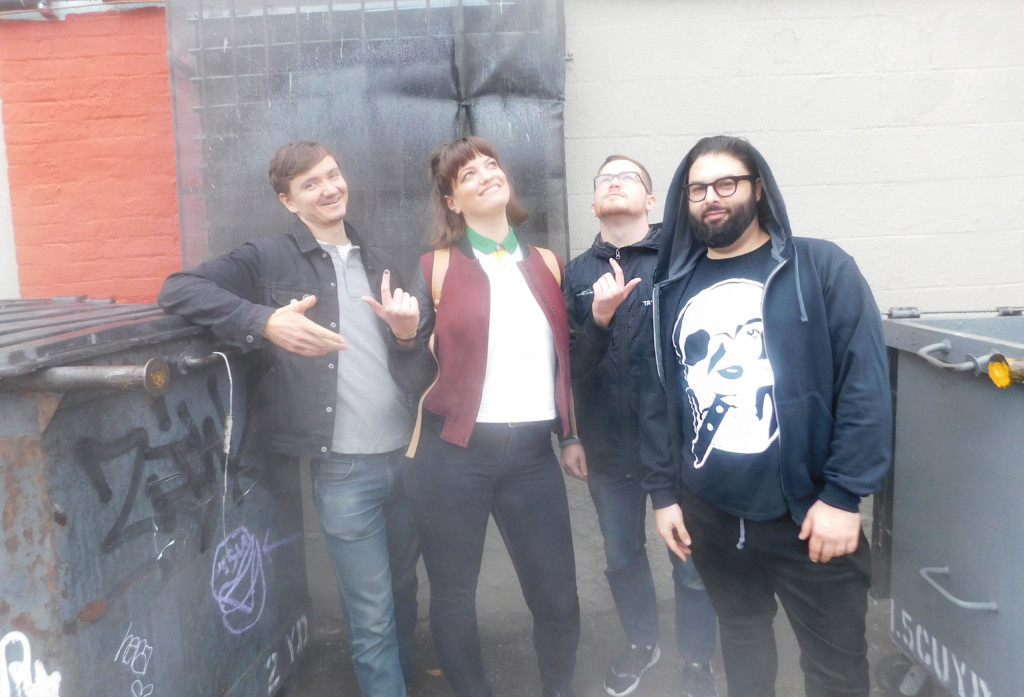 Sometimes, like whenever I’m breathing, I worry about looks. The look I’m projecting, the images projected to me, whether we’re all being visually faithful to our art and identity. As far as I’ve learned, it’s never as simple as “the owls are not what they seem.” Sometimes the owls are owls. The mistake is in assuming they’re just owls.

Peer deeper into what’s projected on stage and online and you get a complex kaleidoscope view, the various components of people clashing prettily together. Irreverence and drama. Beauty and garbage. A genuine sense of humor and acknowledgement of the ache that guts you when you stare at the New York skyline. Get you a band that can capture both.

I consider this later, but not, if you wanted to imagine it, walking back in the mist.

I stumble back home to my room and fall into a mimosa-induced coma instead.