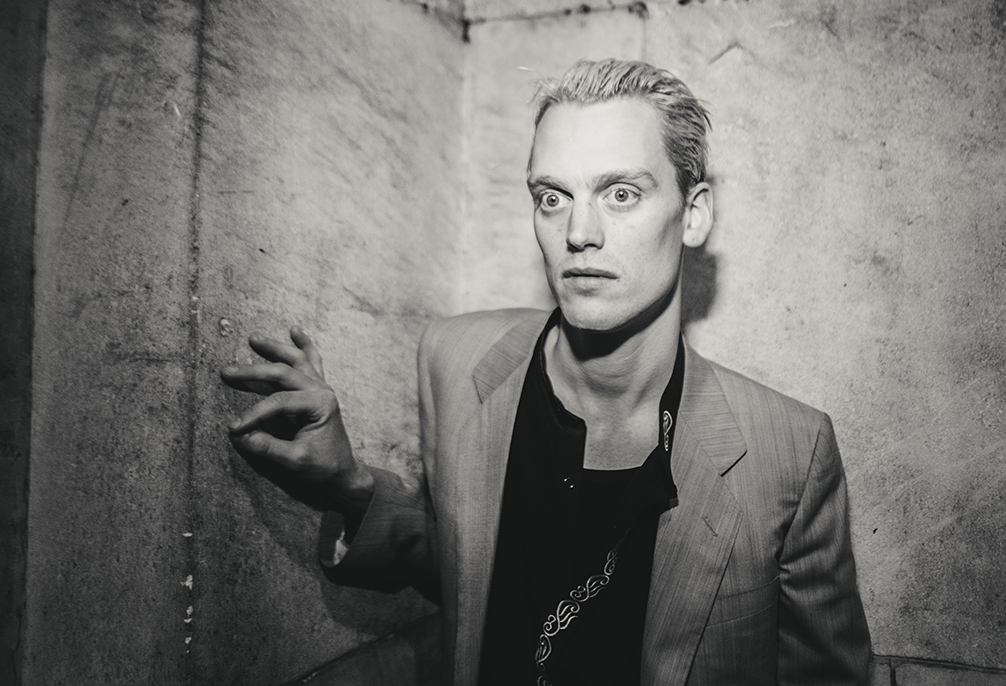 The disco balls were in full force at Baby’s All Right last Saturday, where the night’s festivities could have easily marched under one banner: Night of the Weirdos. That is of course, the highest order of compliments coming from my fingers, and while I knew from firsthand experience what a bizarro Canadian crooner Sean Nicholas Savage is, I was delighted to find a kindred kook in Dinner.

Comprised of Danish singer/songwriter Anders Rhedin, with the assistance of a live guitarist affectionately referred to only as “Fielder,” Dinner was intent on making their set as fun as humanly possible. Rhedin succeeded. An angular New Romantic in a split-open, black blouse, the artist expertly intertwined goofs into his deadpan delivery. “This is a song about going out,” Rhedin droned before announcing, “This song is called ‘Going Out.’”

Prior to a banging rendition of “Girl” from 2015’s Three EPs, Rhedin instructed the entire room to “sit down,” before treating us to a sulky serenade from the center of our crouching bodies. Rhedin stood over us, a sparkling shroud of cloth dripping from his head, and then joined us on the ground for a good wriggle-around. As he rejoined Fielder onstage, Rhedin announced that “the genius Sean Nicholas Savage” was to join him onstage… only Sean was nowhere to be found. “Sean! SEAN!” he shouted, and the crowd followed suit, eventually succeeding in our beckoning.

The resulting duet was exceptional – contrasting Rhedin’s somber baritone with Savage’s gutsy falsetto. Savage swayed dreamily as Rhedin danced in typical Dinner fashion – which reads like someone getting ready in front of the mirror on prom night in an ‘80s film. On Saturday night, I can safely say that Dinner was served hot.

Sean Nicholas Savage is a much less kinetic performer than Dinner, for certain, but his command of a crowd is not reliant on bouncing around. In fact, he stays remarkably still while performing, his pipes doing most of the movement for him. In his early moments onstage he stood in blue-striped track pants and a dingy tank top. His closely cropped blue hair was the exact hue of his pant stripes by no accident. A saxophonist stood to his left, injecting even more sex appeal into Savage’s already sultry material.

Unfortunately, the saxophonist retreated offstage before long, leaving Savage with his only accompaniment: the backing tracks he plays from his phone. It may be a modern technique, but I’m certain that only a performer with the talent and charisma quotient of Savage could effectively pull it off. I still long for the day I can see him with a full band. Then again, if that day never comes, I’ll still gladly attend his gigs.

Ostensibly there to present new material from latest LP Yummycoma (released one day prior) Savage also swept through crowd favorites like “Chin Chin,” and “Everything Baby Blue” with his snarling and sweet voice, occasionally taking requests and reading the odd poem, (or “rant” as he labeled “Tarot Boys”). A pared down version of Alphaville’s “Forever Young” truly brought the house down, as did Savage’s encore: the strange and self-aware “Music” from 2016’s Magnificent Fist.

“I knew he was going to end with that!” a man in the audience joyfully shouted. And I knew that Sean Nicholas Savage would keep on keeping it weird.