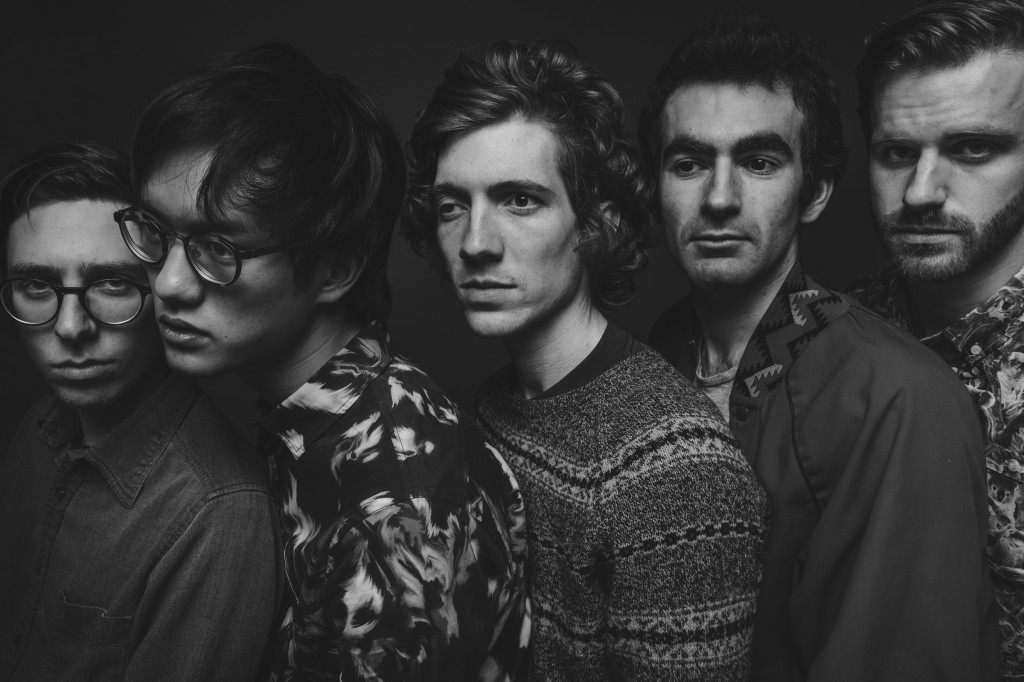 Landlady are more like the upstairs tenant making an excessive racket than the curmudgeonly old woman banging on the ceiling with a broom handle from downstairs that their name suggests. That being said, it would hardly be out of character for the Brooklyn-based band to incorporate the broom-banging technique into their already experimental percussion – in fact, it’s the everything-but-the-kitchen-sink approach to songwriting that has garnered the band so much buzz of late. On the heels of releasing their much-praised sophomore record Upright Behavior and a grandiose appearance at Rough Trade last month that saw an additional 25 musicians added to an already effusive five-member lineup, Landlady kicked off the biggest tour they’ve yet undertaken last night at Death By Audio in Williamsburg.

The place wasn’t packed but it was profusely sweaty, prompting nearly half the band to remove their shirts after only a few numbers. Lead-singer Adam Schatz  was a bit more coy, promising to undo a shirt button for each tune played after beginning the set with “Under The Yard.” The song’s opening sing-along provided an almost religious call-to-arms; like the dimming of the house lights to signal the end of intermission, the harmonies were a clue that something major was about to happen. And that’s how Landlady approaches music-making: every moment of it is a life-altering event. They don’t shy away from anything, whether it’s a key-change or stylistic shift or unflinching lyrics. They just go with it.

Schatz appeared a bit jittery at first, his between-song banter more than a little self-conscious. But if the shout outs and introductions were a bit awkward, his vocal delivery was hardly that. “This is a song about what you’d do if your sex robot was malfunctioning,” Schatz sputtered, and the band launched into “Girl,” arguably one of Landlady’s most accessible jams. It’s as fidgety and anthemic as the rest of Upright Behavior, but manages to bottle up its mood swings and distill its movements in a more concise way than the record’s most sprawling efforts.

Landlady does extravagant very well, to be sure. There were very few moments during last night’s show that didn’t feel epic, and through the continuously shifting sonic motifs, “epic” was really the only constant.  There were lush harmonies, bouts of blues rock, funkified bass solos, hushed and folksy moments, dissonant breaks, even hints of post-punk here and there. If the band’s aim is to keep listeners on their toes with blink-and-you’ll-miss-it genre mish-mashing then they’re doing an excellent job, and there’s no idea they’re unable to tackle with gusto and talent. For some, that’s Landlady’s biggest asset.

For a listener with specific proclivities, though, the rapid-fire change-ups might not dovetail seamlessly. The someone who loves the watery reverb dripping through the pulsating, urgent percussion that propels “The Globe” might feel lost in that track’s meandering choruses – though “chorus” sometimes feels like too basic a term when talking about this band – wherein everything but Schatz’s eccentric vocals drop off, and further confused by the caterwauling build to the bridge. There’s something for everyone, yes, but at what point does it become an indecipherable melange that’s could be seen as pandering, banking on the fact that someone, somewhere, is going to like at least one part of any given song? Landlady are certainly more earnest and interested in their art for that to be the case, but either way it can be almost to exhausting to keep up with. If you’re not actively listening, you’ll lose the thread very quickly.

And it seems that active listening and audience participation truly are Landlady’s ultimate goals. Like someone nagging her tenants for rent, Schatz implored the scattered audience to move toward the stage, get close to one another, sweatiness be damned. He ramble-shouted about being thankful for the existence of Death By Audio, ruminating on the fine details that come together to run a DIY space in Brooklyn, thanking everyone from the in-house booking to the muralists who painted the walls. He asked the audience to interpret the room as a collective energy, and led everyone in a chant of “ALWAYS” as the band finished out the set with “Above My Ground” (at which point his now-unbuttoned shirt came flying off as promised). If felt more than a little schmaltzy, but Landlady isn’t a band to shy away from sentimentality. Like similarly sincere and self-aware band-of-the-moment Ought, Landlady ask their fans to exist with them in the very moment, eschewing the passive norm. Landlady give particularly powerhouse performances, and because their wide range of styles will appeal to pretty much everyone at least some of the time, their upcoming tour is not only their first, but likely their last before they start headlining huge venues and hitting the festival circuit.

Take a listen to “Above My Ground,” check out tour dates below and catch them while you can.