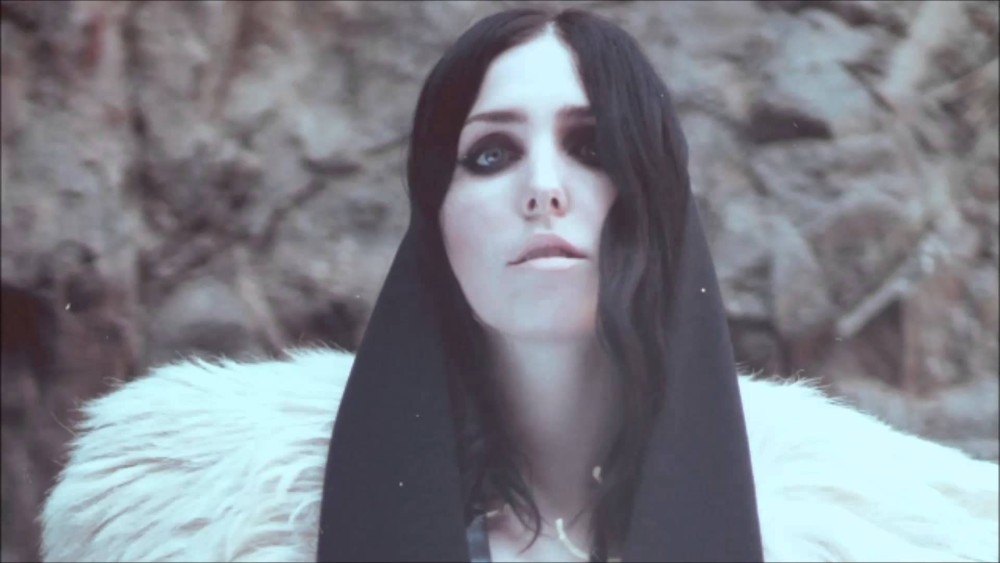 “Thanks to everyone who listened and was respectful. And to those of you that talked through the whole performance: that was fucked up.” These parting words from Chelsea Wolfe, spoken in a rather resigned tone before she played the final song of her set opening for The Eels Sunday night at the historical Apollo Theater in Harlem, characterize everything that’s difficult about the reality of a being a supporting act. It’s often a bit of an uphill battle for attention, unless, of course you’re getting negative heckles or requests for songs from Lynard Skynard’s catalogue (note: “Play ‘Free Bird’!” is not even ironically funny anymore, idiots).

While no one requested that Wolfe play Southern rock classics, her ultra-early set made the full attention of the audience pretty hard to come by.  As I would come to learn after Wolfe played, fans of Mark Oliver Everett have a pretty myopic focus and a lowered capacity for interpreting anything less fluffy than “I Like Birds,” so perhaps Wolfe’s grandiose, noise-inflected baroque pop was simply over the heads of those attendees who were able to get a babysitter in time to hoof it up to Harlem to catch her performance. As the event was seated, Wolfe also had to contend with tardy folks who were innocently (if obliviously) trying to find their seats. It might be par for the course, but that doesn’t make it any less frustrating, especially for a performer as artful and serious as Wolfe.

The tragedy here is that those who talked through Wolfe’s set or trickled in late missed a transcendent performance from a powerful artist. Accompanied by a violin and synths from two musicians bookending her on either side, Wolfe was able to fill the opulent space with a sound just as lavish. She played guitar through most of her songs, which at times meant picking spidery rhythms. But even more compelling was her ability to take droning chords that might have been abrasive in less deft hands and turn that textural noise into a thing of sublime, tortured beauty. As on her latest record, 2013’s veritable tour-de-force Pain is Beauty, Wolfe’s striking vocals were the truest thrill, sweeping and swelling and emotionally wrought, though never overly so; her sound was right at home in the ornate, neo-Classical surroundings of the Apollo, gleaming through her austere stage plot like the gilded balconies in the shadowy theater.

Side-by-side with the reverent, almost gospel-esque quality of Wolfe’s performance, The Eels seemed almost crassly kitschy. I should probably admit that my interest in The Eels has never really managed to stretch beyond bizarro alt-rock smash hit “Novocaine for the Soul” (which they didn’t actually play), but that doesn’t mean I wasn’t curious or optimistic about the set. Everett has a reputation for being a consummate, warm, and humorous performer and song-writer, and I gave his band more than the benefit of the doubt. But opening with a Jiminy Cricket song and ending with a cover of Harry Nilsson’s “Turn On Your Radio” places the band’s oeuvre in an all-too-accurate and rather unfortunate context. Singing a song called “It’s a Motherfucker” and having it still come off as cutesy is clearly The Eels’ bread and butter, and to some, I guess that’s impressive (though the mostly empty mezzanine wasn’t ultra convincing). Everett’s cavalier repartee cut directly into the dignity that the band’s elaborate set-up attempted to to approach, and seemed almost an affront to the hallowed venue. Early on, when he made a joke about the audience being the “whitest” Apollo has ever hosted, it rang too true for me not to wince at the nervous chuckles around me.

The moral of the story here is that it takes a certain kind of gravitas to pull off a show in such a venerated space, especially when you’re a cultural outsider. Wolfe rose to that challenge gloriously, giving her performance an essential weight and elegance. Maybe next time, more people will be paying attention.