Spirits were high, in a drone-jam sort of way, on Wednesday night, as head-nodders with their hands stuffed in their jeans pockets filed in to Mercury Lounge to hear CAVE‘s set. The stage had been converted into a kind of planetarium, all dark with a twinkling night sky projected onto a screen in front of the black wall. The band, whose new album Threace came out on October 15th, unceremoniously and succinctly introduced themselves: “We’re Cave,” said bassist Dan Browning, and immediately launched into a five minute pulsing, jam-happy introduction. 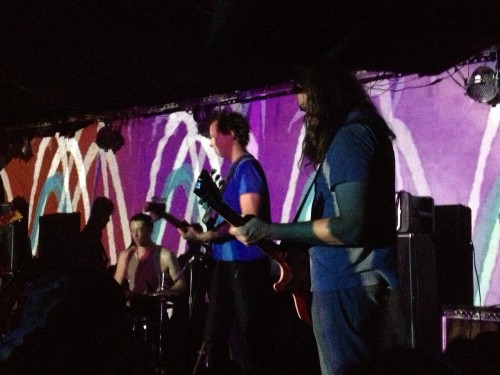 This was partially logistical—there were no vocal microphones on stage, and the band’s set was entirely instrumental. The Illinois-based group did make for a particularly serious, introspective live act, though, and were so absorbed in their playing that they hardly seemed to notice the audience at all. Flickering, black and white strands of what might have been DNA took the place of the stars flashing against the back wall. Cave channeled droning, incanted reels of psychedelic rock, surreally stretching out simple instrumental lines into repetitive, ten-minute magnum opuses. On stage, Browning and guitarist Jeremy Freeze remained virtually motionless as they played their instruments, focused and blissed out as they smiled, closed their eyes and nodded their heads.

“I love trance,” yelled someone in the crowd.

But double helix background notwithstanding, this was no swirly psychedelic hippie rock; the bass formed Cave’s backbone. The set incorporated too much beat and groove to be hazy—so much so that at certain points, if they’d dialed up the synthesizer just a bit, they could have been mistaken for electronic dance music. 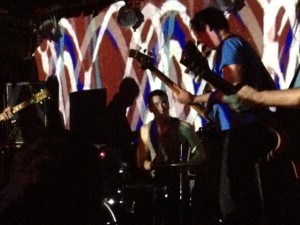 The band seemed to melt from form to form, evoking first one genre and then another. They brought out a flute and a saxophone, enhancing the rhythmic section and swinging the audience from mood to mood in a compelling, all-encompassing hypnosis. Catch CAVE play again tonight @ the Knitting Factory in BK. Otherwise,Watch CAVE’s crazy official video for “Shikaakwa”, here via Youtube: