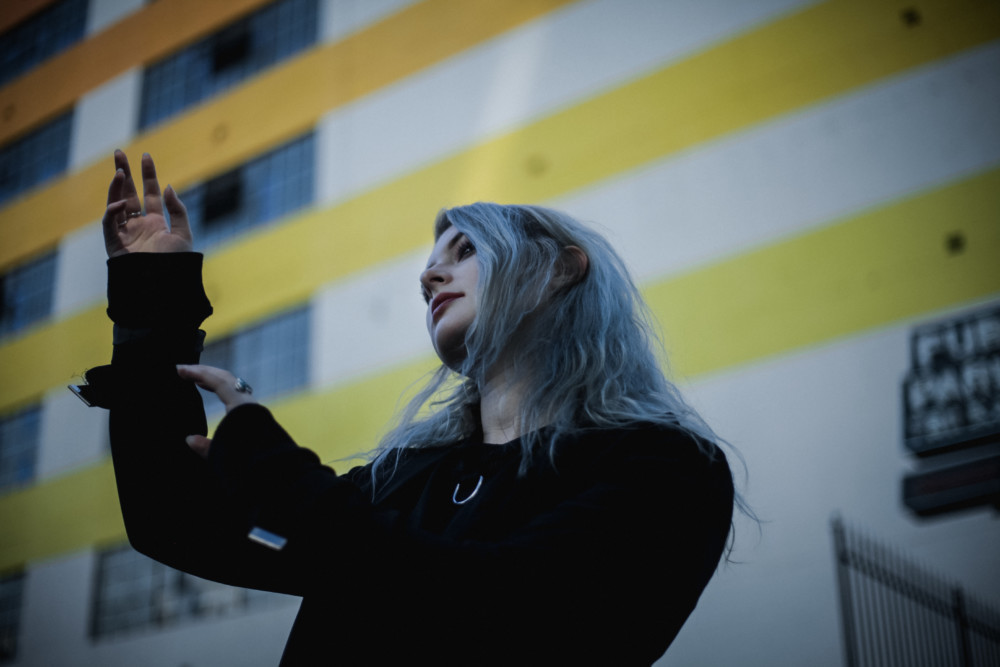 Part suburban Oklahoma cowgirl, part Brooklynite, recent LA transplant McKenzie Ellis (who has released two EPs as Mothica) uses her cunning wit to balance clever wordplay while exploring intimate and often dark autobiographical experiences. Mothica is an alter ego that isn’t afraid of honesty, and echoes strength in vulnerability. You can find her distinct, raspy, yet honey-soaked voice speaking directly to her camera lens, breaking the third wall on social media platforms while simultaneously spreading her words of wisdom and personal truth. These truths come in an array of textures and topics, ranging from her passion for Matcha, to her personal journey as a survivor of childhood trauma, substance abuse, and self harm. Her unexpected pop writing style incorporates nocturnal melodies and siren vocals with a metallic silver lining.

Meanwhile, the videos she’s released to promote her forthcoming album Blue Hour are ultra-personal, drawing viewers deep into her world and its history. “Love Me Better,” released in August, was shot on her final days in New York City, just before she moved to the West Coast. And she recently returned to Oklahoma to shoot a mini documentary/album trailer that revisits her now-abandoned childhood home, her high school, and an old chapel scheduled for demolition. Included are home videos and painful confessions, but her message, ultimately, is that there’s hope – Mothica found it in  seeking help outside herself, making sweeping changes in her surroundings, and most of all creating her beautiful new record.

Audiofemme is pleased to host Mothica at our relaunch party on Sunday, 11/17 at 7:30pm at the Rosewood Theater in Manhattan, along with Zola Jesus, Jess Williamson, Purple Pilgrims, tarot readings, and a tattoo booth – if you’re in NYC we hope to see you there! Read on below to hear more about Mothica’s metamorphosis.

AF: How did the mystical Mothica come to exist?

ME: The name Mothica came long before the music. I felt this kinship to moths and my friend made a joke about me being “Mothica” rather than “Gothica.” The metaphor of a moth attracted to the light has been super prevalent in my life. The “light” I’ve been attracted to has changed over time, whether it was chaos, unhealthy relationships, drugs and alcohol, dark thoughts, or recently, self-care and recovery.

AF: Can you talk about growing up in Oklahoma during the age of internet?

ME: Oh, yes! When I was in middle school I had one of those little block Nokia phones with no graphics. My first experience with self-expression and technology was setting my ringtone, and picking from the default backgrounds. I remember the drama of who made it into your top 8 on MySpace, or what your away message displayed on your AIM account. Growing up in suburban Oklahoma, I dreamed of living in a big city. I was always friend requesting musicians and artists from all over the world. Lookbook, Tumblr, and Pinterest were huge tools in visualizing my escape plan.

AF: If you could choose any decade to grow up in – which would it be?

ME: I used to say the ’80s because of the fashion, and because drugs weren’t regulated but that’s probably my addict brain speaking. I still think the ’80s would be an incredible time to make music with all the new synthesizers that were coming out. I’ve always been into John Cusack movies of course.

AF: If there was a glitch in the Matrix and you morphed into another version of yourself – who would this person be?

ME: I think about this a lot, and the concept of reality. Every little decision you make can alter the course of your day and create a domino effect in the rest of your life. I wouldn’t be pursuing music if I hadn’t met certain people. I wouldn’t have met those people if I wasn’t in the right place at the right time. I think in an alternate reality, I’d be pursuing something that combined neuroscience and visual art. My ultimate goal is to live in a unique home outside of a major city. I’d like to be surrounded by nature, with an art studio, small recording studio, lots of books, a grand piano and a dog. To be able to create freely and inspire others. Hopefully that happens in this lifetime and doesn’t involve a glitch in the Matrix.

AF: How do you feel about the shift in the music industry shedding light on Mental Health Awareness?

ME: It’s very necessary, but it has a long way to go. I was just talking on Instagram stories about the conflicted feelings I have towards artists that market themselves as “sad” and make money by selling merchandise that romanticizes mental illness. Depression is a serious disease, not something cool and sellable. My depression has lead to hospitalization, self harm, and suicide attempts. I don’t believe in rocking a shirt that glorifies depression unless the profits are going to a a charitable cause.

AF: Can you discuss the inspiration and backstory of your new song “Love Me Better”?

ME: Some songs come easily, and some take a drawn out, winding journey like this one did. I had the lyric “you love me better than myself” in my notes for years after a writing session in Los Angeles. I occasionally revisited it, trying to work out the concept but I had no idea who the ‘you’ was referring to. I got into a relationship with someone who truly embodied that lyric. I met him when I first started trying to get sober. I was seeking safety in the co-dependency of the relationship, to avoid facing myself. He moved in with me within the first week of the relationship. You can say we jumped in head first. I rarely left the house, because I knew that I would end up in a bar if I did. I had this unrealistic expectation that being with him would somehow ‘save’ me from myself. After months of failing to become sober, I had a drug induced mental breakdown. I self-harmed with the intention of being admitted to a rehab facility. During this time, he stayed with me until I was released from the hospital. The cover artwork is a film photo he took of me on our last trip together. We ended things because I had to focus fully on my recovery. This song was the perfect fit to release before my album, which is about that later journey.

AF: What was the inspiration behind your new single, “NOW”?

ME: “NOW” was the first song I wrote for Blue Hour, and it came out as a freestyle in the vocal booth. I had recently gotten a tattoo that says NOW on my inner arm which helped inspire the title. The song is a warning: “If you expect me to be happy all the time, you better leave now.”

AF: What has the response been like for the powerful mini-doc/album trailer for Blue Hour?

ME: The response to the mini doc has been beautiful. I received a lot of really thoughtful messages, and some heartbreaking stories from people who experienced something similar. It was such an important story for me to tell, and while the quantity of people that have seen it is small, I feel like it had a strong impact.

AF: What are your goals and hopes for the new record? What do you think will surprise listeners most, after you’ve been so open and honest about your personal struggles leading up to its release?

ME: I think these songs are the most true to me, sonically and lyrically. I tried to be a bit more accessible in the past, opting for more upbeat or EDM sounding production to compensate for lyrics that felt TOO dark. In Blue Hour, you’ll hear explicit lyrics, electric guitar, and analog synths – I’ve embraced my darkness.