He’s unapologetically queer, and as you’ll witness in his “Confident” music video, he commands the room. His presence is both imposing and inviting. He slinks through the crowd, drawing admiration and awe-struck swoons, and the hazy reds soak his senses nearly as much as the liquor and weed. “Puff, puff, pass,” he sends up his words as smoke rings in the dark.

Such confidence was hard to come by, however. His song “Impossible,” another cut from his debut EP, Have You Ever Seen a Boy Break Down?, perches on the other end of the spectrum. Backed by a rich gospel choir, he drowns beneath his depression, and the lilting edge of the song deceives the deep-rooted anguish. “It doesn’t have a happy ending,” he says on a call from his newly-minted Los Angeles residence.

“I want people to listen to it and allow themselves to feel that emotion and be like, ‘It’s OK to feel sad sometimes.’ I go through phases. Some days, I’m like, ‘I’m the baddest bitch.’ Other days, I’m like, ‘I suck. No one loves me.’ Instead of running from that and allowing myself to think I’m crazy, that is me,” he confides. “I’m an extreme person. I feel every emotion very strongly, and I can’t allow myself to feel ashamed about that. I’m going to allow myself to bask in both emotions and explore them and make songs about that.”

The title song, which displays Vara in his most vulnerable state, combs his conservative upbringing in small town America. “Do I want attention / Do I want affection / Do I just want something / ‘Cause everyone has it,” he sings. He wrestles with not only his identity but attempts to reconcile what he was taught to believe and the man into whom he’s blossomed. “Everybody loves to watch a tragedy,” he later admits. He paints the brutal weight of feeling unloved with a remarkable poeticism.

His voice immerses you in all of it, every ripple of sadness washing over your skin. “Growing up, I never felt understood. I was always different,” he says. Out of South Carolina, his father once owned a string of very ritzy nightclubs, and a wide-eyed little boy was first exposed to plenty of punk and dance music, from Whitney Houston to Britney Spears, styles that are generously embedded into other moments like “Looking for Love.” When he was seven, things took an unexpectedly religious turn when his father pulled out a bottle of holy water and vowed to live an austere, God-fearing lifestyle.

Vara was left hanging in the balance. “It’s been a battle, and it’s taken me years to decipher all of that. Coming out, I had to reevaluate a lot of my life and who I was,” he says. A cultural makeup of Latin and Greek (his father’s from El Salvador, while his mother is of Greek heritage), he also grappled with masculinity and a fear of sharing emotions. “I’ve always been emotional. It’s definitely something I’ve always been ridiculed for. I never want to hide my emotions. I always want to say how I feel and unapologetically feel every emotion. I hope other males can listen to [this EP] and be like, ‘Yeah, it’s OK for me to feel that, too.’”

“I think it’s fucked up that there’s this unspoken thing that men aren’t allowed to be emotional or insecure. I think that’s stupid. It’s a real thing. I’ve gone to therapy because I’m so anxious about things – who I am and the way I look,” he says. “It’s important to speak out about it. We all feel emotions and should be allowed to cry and have a little break down.”

Despite everything, Vara remains thankful he was “raised in an environment where music was something that was really revered. My mom can sing, and she’s honestly one of my biggest inspirations. I love that woman. She’d always sing in church, and even before church, she would always sing.”

“The intent of music was always to awake emotions in people. It was a very spiritual. I’ve been able to carry that into my life now,” he says.

He stops for a moment to collect himself. While his mother is still his biggest fan, his father remains a bit detached. “I don’t think my dad has heard any of the music. So. I don’t know what he thinks about it. It is what it is,” he says, his curt response speaking volumes. He quickly adds, “My mom thinks it’s good.”

Amidst such upheaval, Vara’s health also went into swift decline. At 15, he was officially diagnosed with Tourette’s Syndrome and was removed from a normal high school life. “I felt betrayed by myself. I didn’t know if I’d ever get better. It was a dark time. I felt alone. I remember my mom would be just sobbing,” he remembers. He spent the next year locked away in his room, and music became his only way to cope and process what was happening to him. “It made me feel understood. It was a painful era of my life, but the blessing out of that is music is my medicine.”

He soon flicked through the catalogs of such music icons as Queen, Janis Joplin and Beach Boys. Even now, his work feels both throwback and contemporary, covered in a thick layer of charm that only Vara possesses. Musically, much of his debut, including third single “Want Me To,” thrills the eardrums with a breathtaking splendor and could very well fit among such Queen classics as “Somebody to Love” and “The Show Must Go On.”

After saving up a month’s rent, the burgeoning songwriter relocated to Nashville to not only cut his small-town ties but to fulfill an unexplainable hunger in his core. Still in high school, the then-18-year-old felt the buzz of Nashville’s dazzling neon lights and the promise of superstardom. He took online classes and worked a full-time serving gig at Chili’s. “I was hustling, poor as fuck and very emotional. I had no backup plan and no connection there. I was also in the closet. So, I was going through all these emotions, all at once,” he recalls. 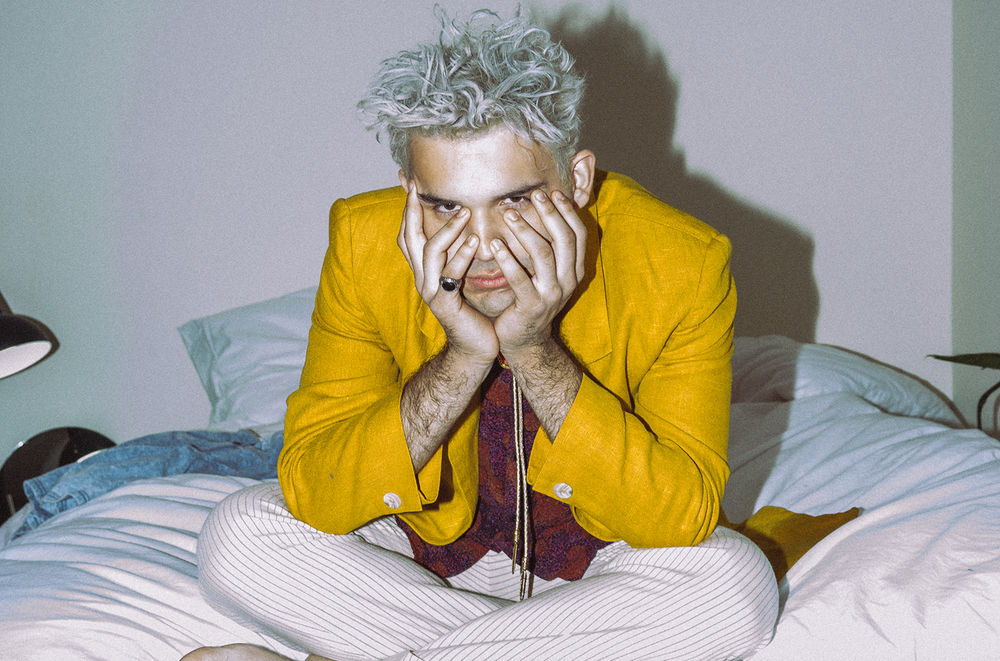 “I think everybody thought I’d be back after a month. I refuse. I would have been living on the streets before I went back. Failure was not an option,” he reflects. “Sometimes in life, you have to put yourself in a situation where you’re either going to sink or swim with nobody else to hold on to. I had to learn how to swim. I almost drowned a few times, but I survived.”

“Have You Ever Seen a Boy Break Down?” is stars colliding, a cosmic summation of his entire journey so far. It’s emotional. It’s angry. It’s liberating. Meanwhile, during the song’s inception, he was negotiating his contract with Warner Records. “I had this moment one day when I was in a session, and I was feeling heavy. Now, people want me and think I have something to say,” says Vara, who moved to sunny LA earlier this year. “But the only reason was because I was so depressed and hated myself. I made art because I hated myself. It took me hating myself for people to appreciate me. That had this weird affect on me.”

He adds, “I remember writing it and having this vision in my head of me in a circus rink sobbing and seeing this crowd of kids and families around me clapping and cheering.”

Vara’s Have You Ever Seen a Boy Break Down? is an exuberant display of a singer and songwriter finally coming into his own. Everyone will most certainly be clapping and cheering soon enough, but it’ll be because a superstar has emerged right before their very eyes.