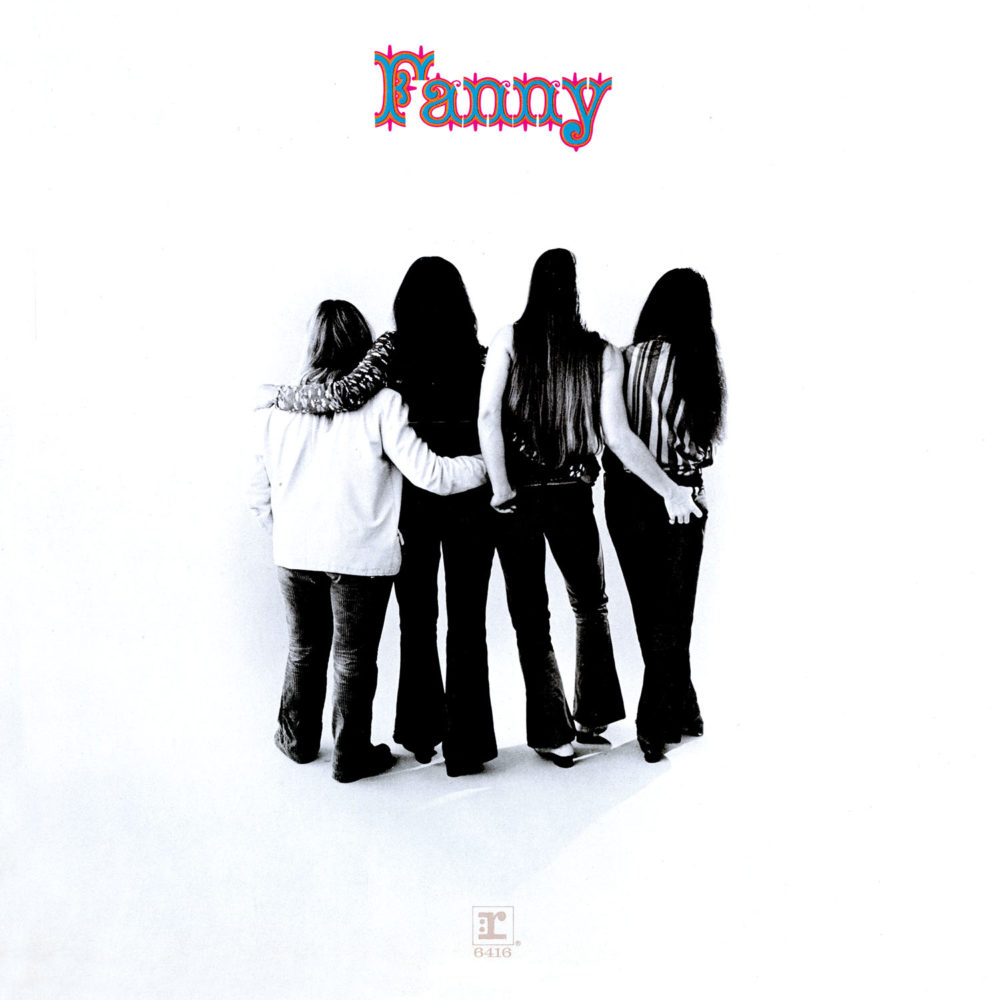 When Fanny was released in 1970, it was notable for being more than just the self-titled debut album of the Los Angeles-based rock act. It was also the very first album, by an all-female band, released by a major label.

In some ways, that was surprising; women had certainly been involved in rock and pop from the early days of rock ‘n’ roll, from Wanda Jackson to the Supremes, from the Shangri Las to Janis Joplin. But female musicians, especially those playing electric instruments, were not nearly as prevalent. Nor would major labels take a chance on the few all-female bands that were around; acts like Goldie & the Gingerbreads or the Pleasure Seekers were only able to release singles at the time.

So it was Fanny, and Fanny, that made the breakthrough. The 11-track album (newly reissued in a limited edition run by collector’s label Real Gone Music) is an enticing blend of spirited rock, leavened with doses of sweet soul, and a touch of edgy funk. “It’s quite the debut, I think,” says Fanny’s guitarist, June Millington. That’s certainly true of the music – but even just showing women wielding their guitars and drumsticks with passion and skill on the gatefold sleeve made a statement in itself.

Making music together had been a lifelong pursuit for June and her sister Jean. The two were born in the Philippines to an American father and Filipina mother, and emigrated to California in 1961, forming their first band when they were teenagers. There were lineup and name changes over the years, but one thing remained constant: the group was always all-female. “We really wanted to have an all-girl band,” says Millington. “It was like we were obsessed. I really believe it was our destiny. We were meant to do it.”

It was fitting, then, that it was a woman who helped the band get their big break. Norma Goldstein, secretary to record producer Richard Perry (who’d recently scored his first hit with Tiny Tim’s “Tiptoe Through the Tulips”), recommended the group to her boss after catching a powerhouse set at LA club the Troubadour in 1968. Soon the group had a contract with Reprise Records, a new lineup (June on guitar, Jean on bass, Nicole “Nicky” Barclay on keyboards, Alice de Buhr on drums; all four members sang), and a new name — Fanny. Millington liked the idea of using a woman’s name; to her it represented a friendly guide, “a woman’s spirit watching over us” like a guardian angel. Being a double entendre also made it more playful, something the label was quick to capitalize on, producing swag with the cheeky slogan “Get behind Fanny.”

After years of playing Top 40 hits like “Louie Louie,” “Nowhere to Run,” and “To Sir, With Love,” at legion halls, fraternities, and community centers up and down the West Coast, Fanny was anxious to flex their creative muscle, and most of the tracks on their debut were originals. Barclay’s ballad “Conversation with a Cop” caught the zeitgeist of the hippie era, but still has relevance today, drawn from her own experience of being hassled by the police for walking her dog (“I thought I had the right to take a walk at any time I pleased/I never knew the night could turn a whim into a crime”). “Take a Message to the Captain” is a tuneful, forthright statement of independence with tight harmonies. The fiery “Shade Me” is a stomping rocker, showing Fanny at their wildest.

Millington welcomed the chance to learn more about the recording process, something she’d explore more deeply in the future. “I think we were really lucky to end up with Richard, because he trained us well,” she says. “And he was learning as well, and he was as dedicated as we were. He told me, ‘You learned from every single session. When you came back, you were better.’ He saw how passionate I was about it, and he really did respond to that.”

This, despite the fact that Millington wasn’t entirely happy with Perry’s production. “I’m still totally critical,” she agrees. “We were all totally intent in putting out a sound that would be competitive in the marketplace. I think that Fanny live really presented a sound that was hard for other bands to compete with. Because we were that good, we had that big of a sound. But he definitely toned that down.” Subsequent live releases do show that Fanny packed more of a punch in concert.

Fanny received good reviews, with the band’s terrific cover of Cream’s song “Badge” singled out for special praise. It’s a song Millington felt was “written for women to sing. If you say the words to ‘Badge’ out loud, those are for girls to sing. And we totally made that song ours — or it made us theirs.” She takes a special pride in her guitar work, having been pressed to take on lead guitar duties when Fanny’s lineup was reworked, post major-label deal. “I wasn’t even playing lead guitar a year before that album was put out,” she says. “I went from zero to the solo in ‘Badge’ in a year. That’s when I look back and go ‘Who was that woman on guitar? I’d love to meet her!’”

Fanny spent much of the next four years on the road, not only to promote their records, but also to prove that they really could play their instruments and hadn’t relied on session musicians. “We knew how good we were,” says Millington. “And we had to prove it at every gig. We understood that.” But they couldn’t escape the stereotypical assumptions about female musicians, “the constant put downs,” as Millington puts it. “People were so condescending. We had to listen to stupid questions. We were infantilized all over the place. ‘What is it like to be a female guitar player?’ I mean, what? Really? You just asked me that? Why don’t you ask me how I got this sound? There was not one question about equipment, about our approach to writing — it was all fluff. There were questions about make-up and diets. That kind of stuff, it wears on you.”

And while they enjoyed the occasional singles success — “Charity Ball” reached the Top 40 in 1971 — Reprise was disappointed with the band’s album sales. “They were worried that we weren’t selling. We were selling 60,000 units per album, but that wasn’t enough, I guess,” Millington sighs. “So they wanted us to expose more of our bodies, that kind of stuff. It wasn’t enough to be just — ‘just,’ in quotes — a great band. It was exasperating. Beyond exasperating, honestly.”

“I think we were just ahead of the curve. I feel like we were trying to do intelligent rock, but people were not ready to listen,” she adds, noting that no one seemed to be able to put the novelty of the band’s gender aside. “I think the damage done to us from a society that wasn’t ready to receive us, is really what did us in. The lack of confidence, and the infighting within the band… just got to be too much for me. But to leave was really hard.”

Millington left Fanny in 1974, and the group broke up the following year. She pursued a solo career, produced records by artists like Cris Williamson and Holly Near, and co-founded the Institute for the Musical Arts, a nonprofit supporting women and girls in music. For a long time, her days with Fanny were too painful to revisit.

But that changed with the release of the Fanny box set First Time in a Long Time: The Reprise Recordings (Rhino Handmade) in 2002. Listening to the music as the set was being prepared gave her a new appreciation for what Fanny accomplished. “I started to listen to the stuff because I had to. And then I wrangled my way, me and Jean, to be there for the mastering, and we then listened to all of it again. And I realized, ‘Yeah, this is really good stuff!’”

The internet has also led people to Fanny’s door; on YouTube, their live version of “Ain’t That Peculiar” on the Beat Club channel has over two and a half million views. “I get notes from people all the time,” says Millington. “Messages from people about how they remember where they were the first time they heard Fanny, who talk about having seen us live, or people discovering the band: ‘I just heard you, and I can’t believe I didn’t know about you!’ And so that makes me feel good, and I think that has given me a huge clue as to, okay, yeah, we really did do something that other people find valuable.”

Millington eventually chronicled her Fanny experience in her fascinating 2015 memoir, Land of a Thousand Bridges: Island Girl in a Rock & Roll World (which she’s now turning into an audio book, as well as writing a second memoir). A documentary about the band is also in the works.

Fanny might not have gotten the commercial breakthrough they hoped for. But their impact turned out to reach beyond the heights of the Top 40 – their efforts helped change perceptions of women in rock, by the simple act of picking up an electric guitar and plugging in.

“What a hard-working band we were,” Millington says. “We were working every single day, and working hard at it. And you can hear it even now. We always hoped we’d have a hit record. But it was more the destiny thing; we definitely felt that destiny calling us. And so we had to do it. And people are really finding the value in Fanny, and the work that we did. So that’s pretty incredible.”