This year, Girls Rock Santa Barbara has developed The Summer of Love Internship, its first ever paid internship for teen girls and gender-expansive youth, which allows the organization to continue to provide a safe, collaborative environment in which to encourage lifelong skills like positive peer bonding and self-confident resilience. The internship, which lasts six weeks and pays each intern $500, offers six exciting and arts-focused disciplines: Record Label, Recording Artist, Social Media, Journalism, Photography, and Podcasting. Audiofemme is pleased to publish the following article, written by Andrea Li and Emelie Sanchez, two interns from the Journalism program. 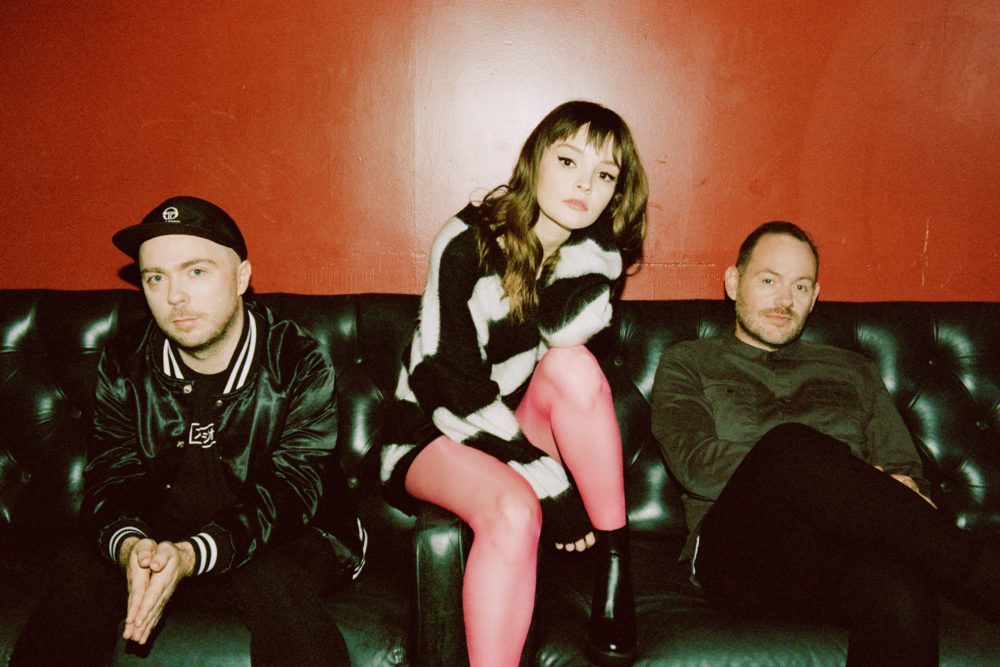 Electro-pop powerhouse Lauren Mayberry of Scottish band Chvrches embodies Girls Rock Camp’s mission as global movement and an incredible organization for young girls and non-binary youth to tap into their musical side. Not only has she personally been a part of Girls Rock camps in the past, her band partnered with Plus1 to donate $1 from every ticket sold to Girls Rock camps all around the world. She recently sat down to talk with two interns from the Girls Rock Santa Barbara Journalism internship program over Zoom.

Mayberry herself has been an inspiration to many, as she has been very vocal about supporting the feminist movement, even publicly bashing critics who have made misogynistic comments about her and her stage outfits, explaining how the comments have affected her everyday life and mental health.

Chvrches have been together since 2011, and have steadily grown in popularity. Last year they collaborated with Marshmello on their song, “Here With Me”, which has garnered over 39 million views and 29,000 comments on YouTube. Mayberry has been in the process of making a new album with her bandmates Iain Cook and Martin Doherty since February. Over the years, they have learned the ins-and-outs of how they write their music – this makes writing an album while socially distancing is a bit easier for them. In April, they released a “Separate But Together” version of “Forever” (originally from 2018 LP Love Is Dead) which shows how they collaborate from afar. Check out the video and read our interview below.

GRSB: You’ve mentioned on your social media that you’ve been working on a new album. What can we expect from this album, and how does it differ from your 2018 album, Love Is Dead?

LM: We started writing together again in February, so we had about a month together in the same room before everything went into shut-down. But, we’ve been writing [over Zoom at] a set time every day. Iain and Martin have this kind of screen sharing software so they can both be in the session at the same time recording things. I’ll record my vocals separately and send [it to] them. Normally, before when we’ve [made albums] we started writing and then figured out what the concept was. This time around we actually had a concept in mind before we started writing.

GRSB: Have there been any challenges or obstacles you’ve had to overcome while working remotely with your bandmates?

LM: Yeah, it’s been very weird. It’s the longest time we’ve ever gone without seeing each other. Time zones are tricky since Martin and I live in Los Angeles, and Iain lives in Glasgow, Scotland. So we have to be pretty specific about when we work, and I’m not very good with technology. I think it’s going good because it’s made me have to have more ownership over [my vocals] and be more assertive, ‘cause sometimes I think if I’m not going to be very good at [something] then I just don’t do it, which is a bad habit.

GRSB: You’ve been very vocal in calling out sexist and misogynistic comments you’ve received in the past. How do these comments affect your everyday life and your mental health?

LM: I think it’s definitely been a process, like figuring out if you just completely ignore it or not. I think it’s been helpful to try and create a “persona” that is different from real-life me. Real-life me doesn’t dress the way I do on stage – it’s part of a performance. I kinda feel like trying to own your femininity and use it as part of your art is empowering to me, and it’s not for other people to tell me what to do with that. Whether I like it or not I’m still a woman; I can’t change that. It’s brought up to us pretty constantly through our work, so to me, it feels like a positive way to harness that. But also, knowing when to take a step back and take a mental health break is important. I think it’s just about knowing when you need to give yourself some time off.

GRSB: Given everything that you’ve had to go through, what advice would you give to your younger self with the knowledge you have today?

LM: I think I would want to be a little bit more trusting of the people that I can trust. I think I was a little suspicious of everybody at the beginning and at the beginning, it was all men – really great men, but men I didn’t know. We were getting signed to labels that had mostly male bands. One A&R said “We’re gonna make you the next [Pixie Lott]” and I was like, “This is not at all what this is meant to be – this guy does not get it.” I feel like I was quite scared, so I would say make decisions based on positive things, and have more fun – it’s going to be fine. And take more photographs! I feel like I’m always stuck between not being on my phone all the time and being present in the moment. Sometimes I’ll look back and I’m like “Oh yeah, we didn’t take any photos or videos.” Especially now when everyone is inside all the time, I want to reminisce. So collect the memories while you can.

GRSB: Earlier you mentioned how you’ve shifted over to Zoom, but before the shutdown, what was your creative process like when writing and recording music?

LM: Well, normally we don’t really come in with pre-existing ideas. We’ll get in a room and the guys will start playing and we’ll come up with a beat or a riff or something on synths. Then, we’ll write kind of a vocal over the top of it. So, every Chvrches song has a recorded version that’s just me or Martin singing nonsense over it. Once we have that, we write lyrics and put them in afterward. They are the last thing that goes on.

GRSB: How much of your music is inspired by real-life events and situations or just stories?

LM: I would say for us, most of the stuff we have written so far has been purely personal. I think on the new record, we do a little bit more of a narrative style of writing, but using it to tell personal feelings. I feel like everything always starts from a personal place, and I think this time the concept is a bit more theatrical. Then there’s space to tell those personal stories more narratively. Which is why I love artists like Nick Cave and Jenny Lewis because they write like that.

GRSB: Do you have any advice for young girls who are just now starting to deal with the stress and pressures of existing in a male-dominated world?

LM: Yeah, it’s a lot and I get it. Sometimes you’re like, “I don’t wanna do this, I want to just be allowed to go to work or school or perform.” I don’t want to have to deal with [misogyny], because the guys don’t have to deal with it. What’s been super helpful for me is to have a good group of female friends because they understand. I’m really lucky to have friends back home because it can be frustrating. Iain and Martin can be so supportive but they don’t totally get it the same way other women do. You don’t have to explain why it’s so terrible or annoying – they know already.

GRSB: Chvrches has partnered with Plus1 to donate to Girls Rock in the past. How did this collaboration start, and why did you choose Girls Rock?

LM: Growing up I lived in the middle of nowhere and didn’t really know any other kids that played music and it was quite lonely. When I started playing in bands I realized that it was all boys, and it felt kind of scary. I guess I wished that I had camps like Girls Rock growing up, it would have been a different experience for me. And I’m not going to be [making music] forever, one day I’m going to wake up with sore hips and I’m not gonna be able to tour in the same way. So we felt like we wanted to do something [to give back] while we had the chance.