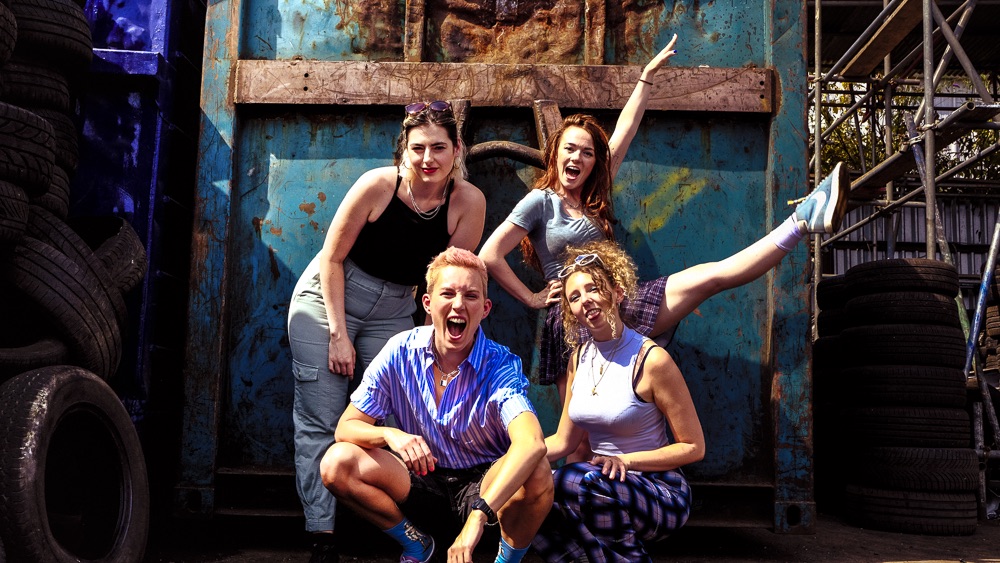 We’re going through a precarious time for women’s and LGBTQ rights, and London-based punk band Dream Nails has a lot to say about it — and, most notably, is also doing something about it. The band, which has labeled their Riot-grrrl-inspired style of music “witch punk,” made headlines in 2016 for a song aiming to hex Donald Trump and prevent him from taking office, and their self-titled debut LP, out August 28, contains the mix of political passion and humor that they’ve become known for.

The band has been political from its origins. Lead singer Janey Starling and guitarist Anya Pearson met through a feminist activist group five years ago, and the additional members shifted over the years, now including Lucy Katz on drums and Mimi Jasson on bass. They began playing mainly for feminist collectives in the UK but have gained wider appeal since, which Starling chalks up to feminism going mainstream.

But Dream Nails — a name inspired by a nail salon down the road from Starling — wore feminism as a badge before it was cool, not just in the content of their songs but also in the way they conduct business. They’re self-managed, split labor equally, make sure the venues they perform at have safe-space policies and gender-neutral bathrooms, push for diversity in lineups they’re part of, and use their music to raise money for causes like domestic violence shelters and reproductive rights. “We’re activists first, musicians second, but I think those identities are increasingly intertwined,” Starling says.

Following its 2017 EP Dare to Care, the band wanted to release a debut album that represented the biggest themes of their work. “We specifically curated all the tracks on the album so there was a good balance of capital-P political songs, anger, fun, and queerness, because all of these are integral to our identity,” says Starling.

Queerness in particular is central to many of the songs; “Kiss My Fist” is perhaps the most overtly political, examining the “weird juxtaposition of living in a world where the most-searched term on Pornhub is ‘lesbian’ but queer women get beaten up in the streets,” as Starling puts it. It was inspired by an incident last year in London where a group of boys threw coins at a lesbian couple after asking them to “show how lesbians have sex.” The song “is about just wanting to get from A t o B without being beaten up,” Starling explains. “Do you want us on your screen? Do you want to hear us scream?” the lyrics ask. In “Payback,” a song addressed to perpetrators of sexual assault, the anger is similarly palpable, with shouted lines like “Hey mister, get your hands off my sister!”

Other music on the album is more personal; much of it was written based on Starling’s own coming-out journey. “Jillian,” a sarcastic track poking fun at TV fitness celebrity Jillian Michaels and fitness culture in general, is also about “realizing you’re queer while doing a workout DVD when you just broke up with your boyfriend,” Starling laughs. The song, whose video features body-positive clips sent in by fans of themselves working out, plays on Michaels’ mantra that “pain is fear leaving the body” by describing Starling’s process of shedding the fear of coming out.

Along the same lines, “Swimming Pool” references dreams Starling had while she was confronting her sexuality. She considers “Text Me Back” the other queer song on the album, though it’s about a phenomenon people of all orientations can likely relate to — ghosting — with playful lines like, “Don’t make me double-text you.”

This range of serious and fun topics exemplifies what Dream Nails stands for: speaking up about important issues going on in the world, but all while maintaining a sense of humor and uplifting listeners. In this spirit of playfulness, the album features little “skits” in between songs. One gives self-defense tips, another prefaces the subsequent song “Vagina Police” with the disclaimer that they stand in solidarity with trans and non-binary people and not all women have vaginas, and another features a simple call-and-response chant: ”Do you want to go to work? No! Are you going to go to work? Yes!”

“Women in punk are associated with being angry and rageful, and we are all those things, but we also have so much fun at our shows,” says Starling. “We’re constantly laughing and joking, and our lyrics are silly and funny. We don’t have to just be angry that no one gets prosecuted for rape; we can also laugh at the fact that our love interest doesn’t text us back, and both those things are equally important to our existence.”