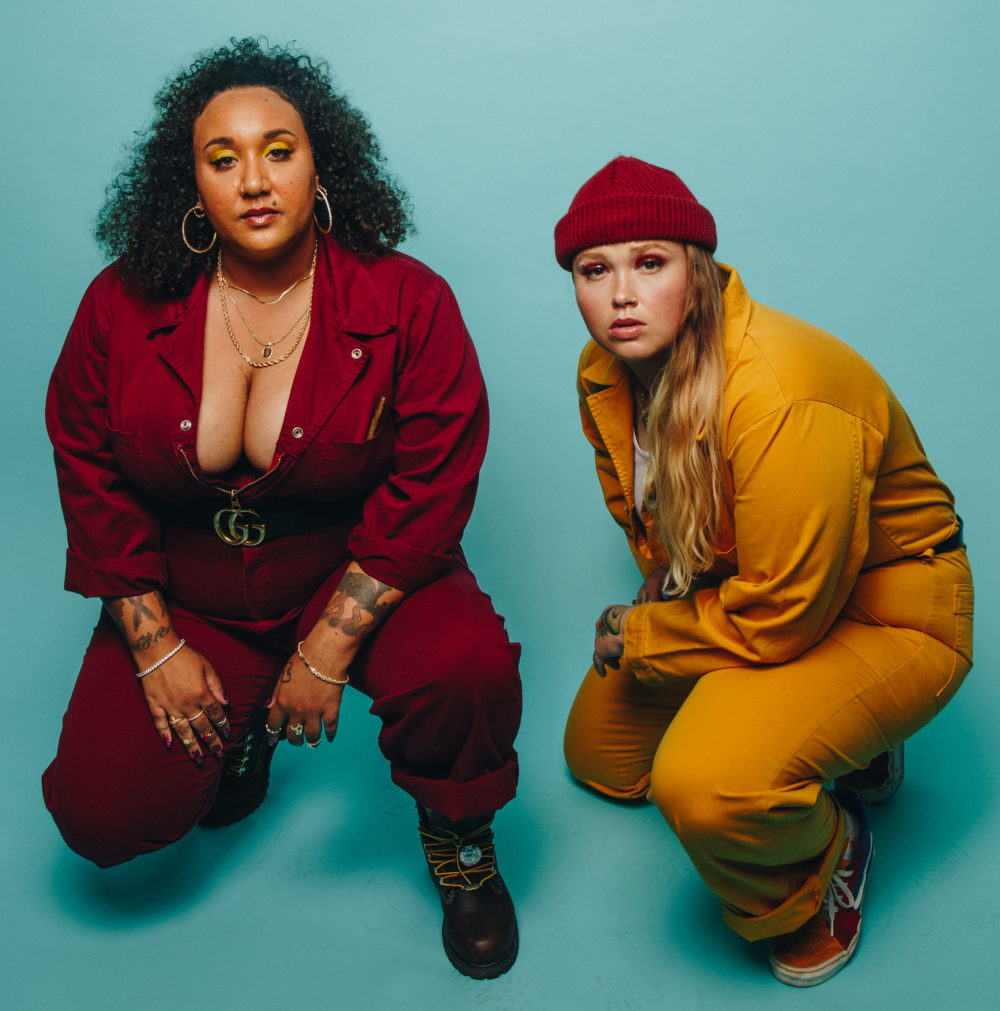 Tía Blimes (aka Blimes Brixton) and Gabrielle Kadushin (aka Gifted Gab) first met on Facebook in 2017 through a mutual friend, and when they met up in person in Seattle, it was clear they had a special connection. “We solidified our bond IRL during a street fight with a girl who kicked the car we were passengers in,” Blimes remembers.

The next time they hung out, they wrote and recorded their first song, “Come Correct,” whose video got over 10 million views. In it, they rap about brushing off haters — “We be the mama and the papa / so every time you bullshit us / all we hear is blah blah” — then close the video with a fist-bump. The public’s positive reaction to the song encouraged them to officially become a musical duo, dubbed Blimes and Gab.

They’ve recorded several more songs since, culminating in a debut album called Talk About It that comes out this summer. The tracks range from “Feelin It,” which captures the mood of a rowdy house party, and “Magic,” a celebration of hard-earned career success.

The overall message of their music? “That we’re not the ones to fuck with because we’ve done the work and paid our dues, that we know how to have a good-ass time, we’re self-accepting and loving, and that we don’t take ourselves or this business too seriously,” says Blimes. “Oh, and that we can rap and sing hella good.”

The artists’ musical careers go way back. Blimes participated in rap battles in middle school, which is where she adopted the first iteration of her stage name, “Oh Blimey.”

“I was into UK hip-hop and admittedly really loved the Harry Potter series, so I grabbed that term from the British slang phrase used to express one’s surprise, excitement, or alarm,” she says. “I hoped to alarm my opponents when we battled and sometimes put on an accent as a character to throw off the competition. Iono, some 12-year-old shit.” Gab’s name, more predictably, is an offshoot of her real first name, taking into account the “gift of gab” she possesses.

Blimes and Gab are currently writing a scripted comedy series about their friendship and their journey to gain recognition in the music industry, which will be directed and produced by Nelson George (A Ballerina’s Tale, Life Support, Brooklyn Boheme).

They sometimes get categorized as “female rappers,” but they hope to debunk the misconception that “female rap” is something distinct from regular rap. “Women have been around in the game just as long as the men. We are not new to this,” says Gab. “You hear ‘female rapper,’ and most people have a preconceived notion without ever even hearing you. Luckily, when they do, they more often than not switch their tune.”

Blimes, who identifies as gay, views being part of the LGBTQ community similarly: It’s not so much about making music about LGBTQ issues as elevating the community by modeling success. “If I can be myself and be respected in the mainstream, then I’m advocating for the LGBTQ community,” she says. “That’s my goal: not to be looked at for my gender or sexual preference but for my ability to make dope music.”